Was Kyle Bass Wrong About Japan?

Have you ever read John Steinbeck’s Of Mice and Men? It’s part of the high school curriculum in many western countries. The story is of two lonely and alienated farm labourers in the depression. One, George, who is sharp and quick, and the other, Lennie, who is physically huge and strong but possesses the mind of a child.

Early on in the book the reader gets this sense of impending doom, yet Steinbeck draws the reader in. You find yourself wanting to find out what terrible fate awaits. It’s an uncomfortable feeling as you begin to see this chain of events forming and you find yourself wanting to scream out warnings to the characters. As the story unfolds this sense of doom and the despair that goes with it is heightened as the inevitability and consequences of actions taken plays itself out. You realise early on that poor Lennie, the simpleton, is going to get into trouble, possibly horrible trouble, and as a reader there is not a damn thing you can do about it.

When I think about the Bank of Japan, I think about Lennie. Possibly well intentioned but totally out of depth with little idea of the immense problems ahead which will ultimately cause untold hardship.

Japan, as we know, have unimaginably huge debt. All ¥ 1,259,476,310,706,736 of it. In fact, this figure is already outdated since the debt is rising every second so let’s simply agree it’s large. So large that if it was human it would make Pavarotti look positively anorexic. 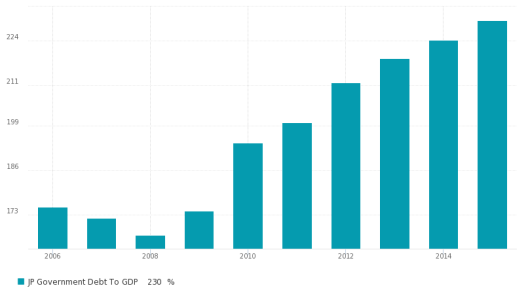 Desperate times call for desperate measures. Enter Shinzo Abe. This guy was the first politician I know of that actually campaigned and won on a mandate to destroy a country’s currency. This is like Novak Djokovic entering a grand slam tournament, promising to play wearing a straight jacket and blindfolded, and still receiving the highest odds at the bookies. It’s completely nuts but it happened.

The standard line is that devaluing the yen is going to halt deflation, spur exports and bring about economic growth. This is the story told. It’s a ridiculous concept parroted by Paul Krugman and the likes whose wet dream involves us all fighting imaginary aliens in order to become wealthier. No really, I’m not joking.

Unpayable debts won’t be paid. This seems obvious and Japan has unpayable debts… sort off – a point I’ll come to in a minute.

Kyle Bass, one of the most successful and intelligent investors on this ball of dirt today, has made no secret of his firm’s bet against Japanese government bonds. The reasons for this are mathematical and easy to understand. Tax revenues, which are falling due to demographics, cannot keep up with existing, ever rising debts. With a government spending 1.4x what it takes in via taxes the budget deficit can only be made up with more debt. Hardly sustainable and a solid case for shorting JGBs.

Until recently I, too, would have wished to do what Kyle has been doing, which is buying credit default swaps. To participate in this requires a balance sheet well north of my own and as such these options are not available to me. As I review and rethink markets and opportunities – a never ending process for me – I’ve come to thinking that the short JGB premise may well be wrong.

Consider what we do know:

Now, when your largest net buyer turns into your largest net seller the market reaction would logically be a rise in risk premiums, measured here in interest rates. This, given the debt load, would crush the bond market. Not something that the government of Japan would like. Humans will always act in their own self interest and the political class in Japan is no different. In order to keep their jobs they need to hold the bond market together.

What if the story about killing deflation, creating a stronger export market, thus increasing corporate profits, is just that, a story, and the real reason is less altruistic? What if, backed into a corner with no way out, the Abe government realised how desperately precarious their bond market is, and not wishing to preside over a collapse further realised that the ONLY way forward is to print yen in order to buy the bonds that are needed to be continuously issued, not to mention those bonds now being sold by the pension funds who’ve turned from net buyers to net sellers?

Remember, unlike Greece, Japan can do that. As I mentioned a minute ago, Japan has unpayable debts. Sort off. I say sort of because the the debts are denominated in yen, a currency they can print as much as they like of, and as such Japans debts can be paid at par. The value of the currency under those conditions is what matters here but they can actually pay the bonds at par.

This is the real reason the BOJ is weakening the yen. Not in order to “help” Japanese companies but in order to save their own jobs. They HAVE TO print yen to buy Japanese government bonds. It’s that simple. That in itself weakens the yen but it’s a result, not a cause. Abenomics is merely a smokescreen to sell the concept to the world.

Shorting the bond market amounts to standing in front of the mighty BOJ who can print as much yen as is necessary. Last week I discussed how the Asian crisis took hold. In particular, the key takeaway is that countries with foreign denominated debt are in a very different and more precarious position to those who issue the currency their debts are denominated in.

Shorting the yen therefore seems a cinch. Japan can never pay their debts and it’s pretty much a given that as they keep issuing and buying bonds the yen will continue to decline until it goes away.

But Chris, the yen won’t disappear, you might say.

Why not? They’ll print it until they have to go and issue a new currency and at this point their debts have been wiped out. It would take a miraculous recovery of Japan’s economy to pay their debts. As soon as the market finally realises this the depreciation we’ve seen so far which is mild will turn into a collapse. There is still time therefore to position ahead of the inevitable.

The only argument I can come up with against this scenario is if Abe decides to cut spending, let interest rates rise and stand in front of the tsunami of debt they’ve built up. He’d be the first politician in Japan’s history to commit political seppuku.

Maybe I’m missing something and am always open to that “something”. I haven’t found it yet and until then I’m betting “Lennie” is going to kill something. I’m betting the BOJ kills the yen.

“Trouble with mice is you always kill em.” – John Steinbeck, Of Mice and Men

Chris has founded and built several multi-million dollar businesses in the investment arena including overseeing the deployment of over $30m into Venture Capital opportunities and advising family offices internationally. Prior to this, Chris built a career at Invesco Asset Management, Lehman Brothers, JPMChase, & Robert Flemings.
MORE ARTICLES »
PrevPreviousCan You Hear the Fat Lady Singing? – Part III
NextFrom the Mailbag: On Japan and the YenNext

Lots of corporations close to the government are willing to give up their debt.

The Yen will not collapse for a looong time. There are better investments out there.

Interesting article. Bear in mind that the BoJ’s QQE asset purchases are about the same size as the government’s deficit. In other words, the government and BoJ together do not have increasing debt, assuming the bonds purchased have zero cost to BoJ, are not sold and continually rolled.

They will make their people poor and debase their currency along the way, but yes it might work in the sense that they never have to formally default.

Ironically QQE will most likely end in asset and debt deflation once it can go no further. This will be similar (but subtly different) to the end of ‘window guidance’ 1990.