We Should All Strive to Be “Grave Dancers”

In the investment world he’s known as the Grave Dancer. Like many successful and outspoken men, he is loathed by some and loved by others. Whatever you may think of him, it’s valuable to keep an open mind to both success and failure in order to seek the former and avoid the latter. He is undoubtedly one of the smartest investors of all time.

I’ve never met Sam Zell, though friends of mine have. They tell me he’s as intense as one would expect from a guy who entered the real estate world with all the finesse of a wrecking ball and today is widely considered to be the grandfather of institutional real estate.

Sam is probably best known for identifying early on the market cycle and peak of the US housing boom in the 80s. Before the market fell apart, Zell combined forces with Wall Street and created a war chest of capital – a $400 million fund, which at the time was a lot of money.

During the 90s, Zell was then putting that war chest to work accumulating high quality commercial and residential properties at significant discounts where he was often the only bidder. This process of buying deeply undervalued assets at times of distress garnered him the name “the Grave Dancer”.

One of my favourite quotes from Sam sums up his philosophy well:

Between ‘73 and ‘77, I acquired $3 billion worth of real estate. The banks had a problem carrying a large amount of distressed real estate with so many proper-ties in foreclosure. They weren‘t looking to make money. They were just trying to mitigate the losses their real estate loan portfolios were expected to generate.

In those days, institutions didn‘t have to mark-to-market, so I tried to figure out ways to preserve the principal of the asset for the seller and still make the deal work. It basically amounted to lowering interest rates on the debt to the point where you could almost carry it or you had a defined carry. We realized that if we could accumulate assets – particularly in an inflationary time – with cheap fixed rate debt, it was hard not to make a fortune.

When people looked at our performance during the ‘70s, they always asked, ―How did you pick all those ripe projects? But the truth of the matter was that I created $3 billion worth of 5% fixed rate debt in an inflationary environment of 10, 12 or 13%. In this situation, it was hard for it not to work. And yet, like many others in my career, most people thought I was crazy. I‘ve spent my whole life listening to people explain to me that I just don‘t under-stand, but it didn‘t change my view. Many times, how-ever, having a totally independent view of conventional wisdom is a very lonely game.

It’s a classic tale of buying low and creating massive value in the process.

What brings me to thinking about “the Grave Dancer” is his interest in Colombian real estate. Sam may well be correct. He believes that Colombia is one of the best places to be investing right now. Our research indicates this to be the case.

Before you get high on the idea of walking in and buying an inexpensive apartment to hang out in Medellin’s lovely climate and culture, let me be clear: this is not our intention. 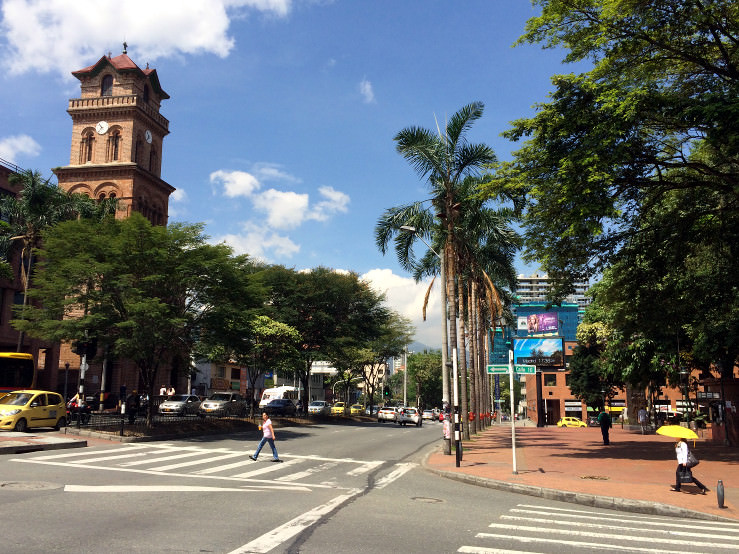 Buying an apartment to live in is not an investment in my mind. It’s just a place to live and I don’t think it makes sense confusing the two. Sure, you can do that and have a nice little vacation home if that’s your thing. You will probably make some money out of it upon sale, too.

Investments you liquidate when it makes sense and have nothing to do with where you may be hanging out for lifestyle or even business. A home you live in and use. The two are very different! People get emotional about any place they live in and getting emotional about investments is not a good strategy.

Though one of our team members loves Medellin so much he’s looking to relocate there on a more permanent basis, we’re more interested in placing capital in a long term strategy and are after profit, pure and simple. I’ll let others go buying retirement homes there.

I was recently asked what macro aspects to look for when considering buying real estate. Here are some for Medellin, though you’ll notice that this is not applicable solely for real estate.

I’m all for celebrating life and it’s easier to celebrate it with profits in your pocket.

However, reading the above you may think its all rainbows and unicorns. It is not! Colombia is an emerging market and emerging markets always pose challenges.

Poor banking infrastructure, corruption, a culture which often is happy to overcharge gringos wherever possible, etc. None of this is anything new for an emerging market. These same problems can be found with ease throughout Southeast Asia, Africa and in between.

Inefficient markets exist everywhere but they’re typically more inefficient in emerging market economies. This isn’t good or bad. It just pays to understand what you’re working with and quantifying the risk/reward and only acting when rewards are outsized to the level of risk taken.

“My own formula is very simple. It starts and ends with replacement cost because that is the ultimate game. In the late 1980s and early 1990s, I was the only buyer of real estate in America. People asked me, ‘How could you buy it?’ How could I project yields? Rents? For me, it came down to these issues: Is the building well built? Is it in a good location? How much less than the cost of replacement is its price? I bought stuff for 30 cents on the dollar and 40 cents on the dollar.” – Sam Zell

Chris has founded and built several multi-million dollar businesses in the investment arena including overseeing the deployment of over $30m into Venture Capital opportunities and advising family offices internationally. Prior to this, Chris built a career at Invesco Asset Management, Lehman Brothers, JPMChase, & Robert Flemings.
MORE ARTICLES »
PrevPreviousThis Country Offers More Than Just Discounted iPads
NextHow to Enhance Your Circle of CompetenceNext

Yes, the fact that Sam Zell is putting money into Columbia makes it “safe” now, in my opinion. He is of course legenday in Chicago real estate, I’m wondering if he might actually have another opportunity for distressed sales there during his lifetime!

His comment, “having a totally independent view of conventional wisdom is a very lonely game” is so true. Most readers here must identify with that – getting close friends and family to diversify out of bubbling USA real estate into emerging markets is bascially futile for us. All the 99% remembers are the daily bodies that floated down Medellin’s “Rio Muerte” during the 80’s. But this is where Capitalist Exploits and Seraph produce such value – shaking off “conventional” human reactions to lead visionaries into the new growth areas of the world. But, with eyes wide open and full risk disclosure. It isn’t for everyone, I have found that……