What This High-End Escort Can Teach You About Business

At a recent meeting with a VC in Singapore a strangely interesting article Sex is Sex. But Money Is Money. was shared with me. It was written by a 24-year-old ex-New York escort named Svetlana, and I recommend it to entrepreneurs, business owners and investors alike.

What I found most fascinating were the business lessons this girl had learned. Prostitution is certainly not what pops into most people’s heads when they think business. It is said, however, to be the oldest “profession”.

Let’s take a look at the lessons from this lady…

Lesson 1: Ongoing capex is necessary to grow your business

Even if you’re not a businessman, an investor or in fact inclined to think about daily activities from a business-minded perspective, you’ll likely grasp the basic concept that in order to keep your house, your car or your boat in good shape you’ll need to spend some ongoing money on servicing, repairs and maintenance.

If you’re in a profession it’s likely that you need to spend money on keeping relevant via courses, workshops and so forth. Sportsmen need to keep fit in order to perform and businesses need to spend money on keeping relevant, too. This involves, among other things, marketing, updating technology, equipment and education. As discussed before, we live in a dynamic world and it’s very dangerous to think in a linear fashion.

Capex is required to grow an economy too, and from a global macro viewpoint it’s important to watch these trends as investors. This is true whether you’re looking at an entire country, a sector or an individual deal. Capex cannot grow faster than revenues, so the ratio of capex to revenues needs to be watched. This is, of course, how it is relatively easy to see where in the business cycle a country is. Just as revenues ,or more accurately free cash flows historically drive asset prices or valuations, so too increasing revenues will typically drive capex and falling revenues will cause a contraction in Capex.

As an investor in early stage private equity it’s typical to see large capex with little to no revenues, otherwise known as burn rate, but this has a limited time frame and typically a company needs to gain a certain amount of traction during this growth phase in order to begin generating returns on this previously spent capex.

Right now, for example, a concern in global markets is that there is very little capex and it’s been falling. This article from the Economist details more on the numbers and the graph below shows the contraction. In short the revenue growth globally is not telling business owners to increase capex. 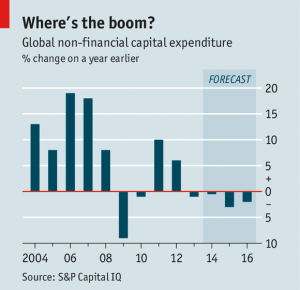 Side thought: Svetlana had one thing in her favour. She lives (or has lived) in NY, which means she is very close to the hose spewing liquidity into the markets. If I was going to sell my body (not that anyone would pay for it) I’d also locate myself as close to the hose pipe as possible.

Lesson 2: Do not neglect the value of uniqueness

Here was an Eastern European girl with no formal education who had little prospects, and subsequently struggled to find a job. She took the fact that she was from Eastern Europe and turned it to her advantage, instead branding herself as an exotic and foreign girl; an advantage since guys would want to hop into bed with and exotic, beautiful young girl, over and above a local girl presumably. This was her IP and she used it to her advantage.

I have a friend, Derek Sivers, who built and sold a very successful business. Derek wrote an article entitled The Philosophy of Great Customer Service about what made his company stand out, and a major reason for its success. One of the critical success points for Derek was that he had a real person answer the phone. In today’s world of automation this is a discerning factor. You need to stand out and provide something unique, valuable and engaging.

Lesson 3: Study the market and position yourself accordingly

Svetlana, the girl in the story, studied her market. She learned that there were customers in all income brackets; she learned what they wanted to hear, what they wanted to see and do, and she positioned accordingly. Whatever your chosen market, it’s not as hard as you think to determine what and where opportunity lies. Study your competition, know your market and you’ll immediately see where gaps exist. I just got off the phone with a good friend and mentor. He just sent me this fact. I’ll just cut and paste it below because I think it’s relevant.

Iran now accounts for approximately 90% of the world production of saffron – $11 gram. Wikipedia on Saffron

I’ll leave those with an imagination to consider this. A massive concentration of supply in anything in one place ALWAYS increases the arbitrage opportunity. Imagine if you really knew this market.

I’ve not looked much deeper into saffron, though. I’m a busy guy, but knowing these things has always proved valuable to me. Why? Because I’m always meeting businessmen, entrepreneurs and financiers from all parts of the world and I never know when I’ll next bump into someone in the business of trading saffron.

Even writing this article may bring out someone who reads this and happens to be in the spice business and will reach out to me and I’ll learn about saffron. I know this because we have the most awesome readers 🙂 Perhaps there is an opportunity there. Perhaps not.

Lesson 4: Being an owner is better than being a worker

This isn’t as simple as it sounds and though I’ve been an entrepreneur and owned and run businesses most of my adult life, the above statement is not necessarily true everywhere, every time. I know business owners who work 7 days a week, earn very little and at the same time I have a few friends earning high six figure salaries who work 9-5 and can go home and switch off. That said, for this girl the cost of operating under an escort service was far too high and running her own operation was far more profitable.

When you look at any industry, obviously the top companies or individual entrepreneurs running those companies are wealthy. It’s business owners who get rich. This is where the asymmetric payoff exists and it’s why private equity historically has been the highest returning asset class.

Inexperience can be costly. Mistakes are currency and I’m fortunate to have a lot of currency. I think of my mistakes as currency because without it I would not have had success. When I’m investing my capital and vetting deals, however, I don’t want to pay that price. I don’t want more “currency” any more than Svetlana wants young virgins. If virgins are involved in a business, and sometimes they are, I need to see a “grey hair” involved in the company; someone with currency and someone who can help the inexperienced navigate.

Take heed from this girl. Whatever you think of prostitutes she clearly has a head for business, and I personally look for business people like her when vetting deal flow. She could be an ugly old “babushka” and she’d stand out for her business savvy. I have to wonder what damage she could do if she put that brain to work in the business world. Either way I wish her luck and would definitely consider investing in her intellect and business acumen.

“One thing I always say is being a great chef today is not enough – you have to be a great businessman.” – Wolfgang Puck

Chris has founded and built several multi-million dollar businesses in the investment arena including overseeing the deployment of over $30m into Venture Capital opportunities and advising family offices internationally. Prior to this, Chris built a career at Invesco Asset Management, Lehman Brothers, JPMChase, & Robert Flemings.
MORE ARTICLES »
PrevPreviousStability in Renminbi Offers an XXL Profit Opportunity
NextWhy I Don’t Really Care About Your ProductNext