When Volatility and Debt Collide

A question to begin today’s discussion… Which is riskier: corporate or public debt?

If I lend $1,000 to my neighbour and take his bicycle worth $1,000 as collateral, which is what pawn brokers do, I have a quantifiable risk. I also have collateral which I can trust. I can see, feel and touch the bicycle.

When you lend money to a business in most instances you actually have a lien over the business and its assets. Even if the business is insolvent, as a bond holder you stand in line ahead of any creditors.

When you lend money to a sovereign and that sovereign finds it difficult to pay the loan back will they allow you to seize their assets in default? Can you take the president’s bicycle?

I believe that the world in general is riskier today than at the height of the GFC.

In our report on global debt we detail both household as well as sovereign debt around the world. The report provides a stark reminder of the global credit bubble and its consequences.

Recently a colleague asked me why did the Swiss break the peg? The answer to that in one simple word is debt. All pegs break eventually because a peg allows for market participants to rely on an underwriter of risk. And when risk is underwritten by someone else then leverage is used, and when leverage is used risk rises. Like spirits, these two bedfellows make for a great party but a terrible hangover.

So how is the world riskier today? McKinsey Global Institute recently published a report on the topic. They mention, and I quote:

Seven years after the bursting of a global credit bubble resulted in the worst financial crisis since the Great Depression, debt continues to grow. In fact, rather than reducing indebtedness, or deleveraging, all major economies today have higher levels of borrowing relative to GDP than they did in 2007. Global debt in these years has grown by $57 trillion, raising the ratio of debt to GDP by 17 percentage points 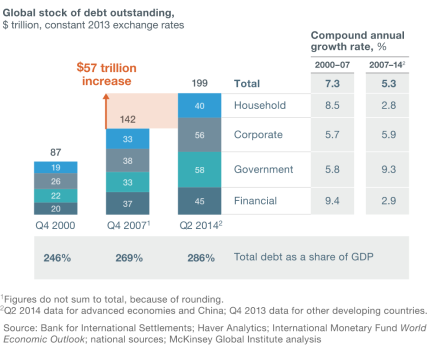 Think about that for a minute and while you’re thinking about that consider that the central banks are very, very close to running all out of bullets. Their predominant weapon has been manipulating the cost of capital via the interest rate market and now we have negative interest rates in Europe. I can’t think of a time when the risk to capital has been greater!

Now, I want you to think about all this debt and consider volatility because this is where we profit from moronic bureaucrats…

Debt increases risk, and risk increases volatility. As such increases in debt typically cause increases in volatility. Six months ago we were yelling from the rooftops that volatility was at extreme lows. This, on the back of understanding that at the global macro level debt was rising, and while volatility should have been rising alongside it this wasn’t the case. Instead we’ve had a divergent relationship whereby as debt has continued to expand, volatility continued to fall. In this gap lies huge asymmetry.

The positions Brad mentioned multiple times right here and which we provided in a detailed report have been screaming ahead. You can still access the report here as this party is still in its infancy.

At the time we received many emails from readers saying things like “Don’t you understand how much debt the US is in?” and that “The dollar can’t rally and is going to collapse”.

Let me be clear. Firstly, we’re not apologists for the clowns running policy at central banks. I think they’re all idiots and I wouldn’t take a job at a central bank unless I was allowed to blow it up. More importantly though, the USD and quite frankly every other currency cannot be viewed in isolation. Context is everything in order to understand global capital flows and why the USD is rallying.

When in Hong Kong recently my suspicions were confirmed about the capital flowing out of China. Hong Kong is the conduit for mainland money which is also why the banks there are so flush with cash.

Consider that China’s debt has quadrupled from $7 trillion in 2007 to over $28 trillion. This debt has been fueled largely by real estate and shadow banking. China’s total debt now stands at 282 percent of GDP, higher than that of the United States. If I was on the mainland looking around me I’d be moving cash out as well. This, amongst other reasons, is why we’re short yuan.

We are entering a period of increased volatility. That volatility is going to be amplified by the gargantuan debts staring down at us.

“In economic life and history more generally, just about everything of consequence comes from black swans; ordinary events have paltry effects in the long term.” – Nassim Nicholas Taleb

Chris has founded and built several multi-million dollar businesses in the investment arena including overseeing the deployment of over $30m into Venture Capital opportunities and advising family offices internationally. Prior to this, Chris built a career at Invesco Asset Management, Lehman Brothers, JPMChase, & Robert Flemings.
MORE ARTICLES »
PrevPreviousThis is the Land of Milk and Honey
NextThis WILL Happen!Next

First of all there are two sides to a debt issue, who do you think is holding all of that debt? Secondly, one would think that amount of debt would have more than taken up all of the excess funds but demand for USD is at all time highs. Low interest rates are the handmaiden of low velocity of money. No one wants to talk about the historically low turn over rate of money. What say you?