World Out Of Whack: While The World Watches US Presidential Elections

While we all sit here aboard the planetary asylum watching and waiting to see if the  US political establishment reaches a crossroads or probably a road off a cliff, a hop and a jump away in the ancient land the PBOC has been forced to deal with their own ugly truth.

Unlike America, the Chinese don’t pretend the people actually have a say, but they do have their own problems to deal with. Namely keeping the Chinese remnimbi from suffering its own version of a cliff dive – an increasingly costly and desperate affair. The PBOC just released FX reserves showing us the battle scars. 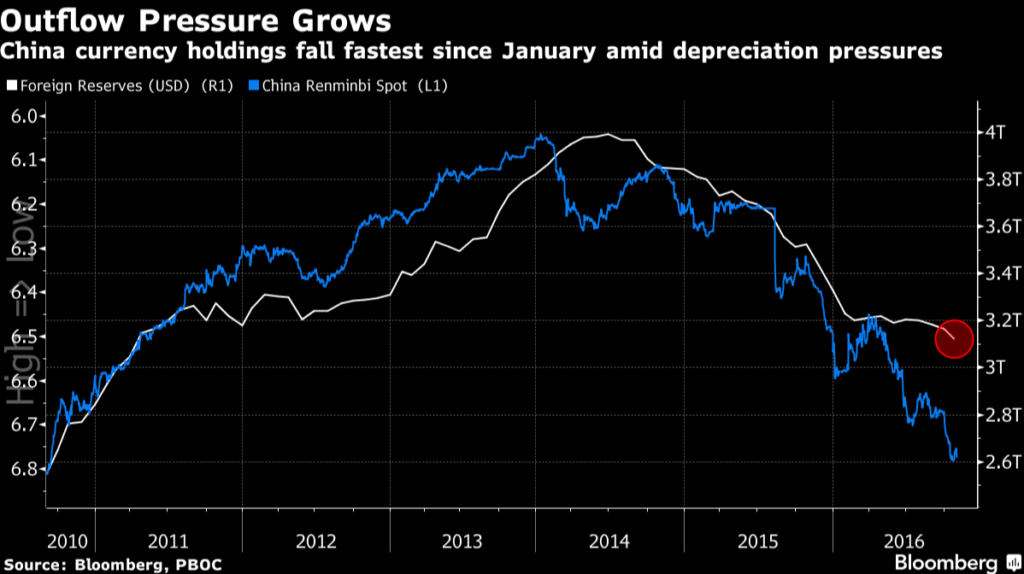 You’d be forgiven for thinking $3.12 trillion is a lot of money. Sure, like a good push up bra, it looks impressive but actually isn’t. In proportion to China’s economy, and especially given their managed currency, the number is both inadequate and falling fast.

As the IMF in a recent report on China state:

The fact is that China’s financial system is haemorrhaging capital.

For some background on the topic of identifying the first cracks in this system go read “What’s China’s Banking System Telling Us” written back in December of 2014. That, my friend, was when there was REAL asymmetry in the trade. Volatility was extremely low and risk simply not priced. That was then and this is now. Money has been made (a lot) but I don’t believe the fat lady has sung her last song yet on the renminbi.

Interbank borrowing costs are rising once again and have just hit an 18-month high.

Three-month dollar LIBOR rates have shot up by over half to 0.89% since June, draining liquidity and raising borrowing costs for the world’s dollarized financial system – which is to say everybody.

This puts pressure on bonds everywhere but our focus today is on China. After all, it’s China which sports an impressive credit bubble, overvalued currency, and an over-leveraged banking sector.

Chinese investors have been pouring money into corporate bonds in anticipation that the PBOC would keep rates low due to a slowing economy.

Looking at China’s domestic market this all makes sense. Fiscal policy has NEVER in Chinese history been looser or credit cheaper. Bonds make all the sense in such a world, and corporate bonds pay higher yields than sovereign so it’s understandable that investors have poured money into this asset class.

As more money entered bond yields fell, causing more investors to come into the market anticipating ever higher bond prices, increasingly buying not for yield but for capital appreciation. We’ve seen this game before.

End of a Cycle

The credit cycle is turning and the key factors which have driven it are reversing leaving the PBOC in a sticky situation.

On the one hand they’re dealing with capital outflows as well as speculation, especially in the real estate markets. In order to curb these issues they’ve focused on cutting debt, thereby pushing up short term borrowing costs. Doing so at a time when the global credit cycle pivots and (we believe) is turning on its heels.

It’s the old “safety trade” except investors are finding out that nothing is safe if it’s overvalued. Investors tried to buy “safe, yielding assets” except as is so often the case they’ve missed the underlying global macro trends in motion. Operating in a microcosm of domestic variables they’ve missed the bigger picture.

Now, as borrowing costs rise and investors want out, the risk is they’ll find liquidity only exists when sufficient market participating are entering the market. When a sufficient number turn around and exit liquidity disappears. A problem!

As liquidity dries up yields rise, and those holding commercial paper and corporate bonds see what is quickly turning red… get redder (if red can actually get redder). 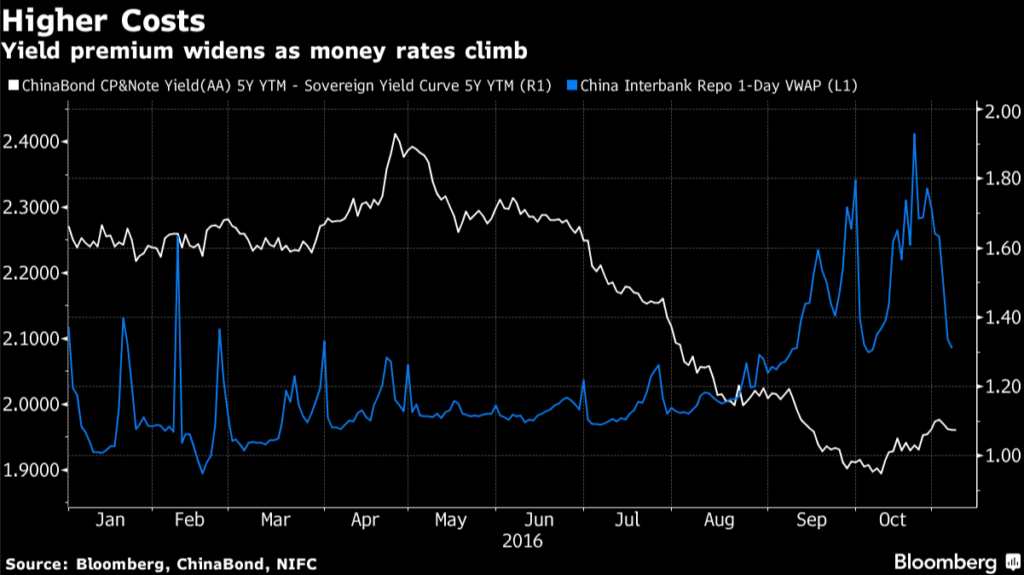 These stresses in the banking system increase pressure to relieve those stresses. The obvious exit valve? The currency.

In addition to rising interbank borrowing costs, China just reported exports fell for the 7th straight month in a row. Putting two and two together we know that a strong yuan means imported goods cost more at the same time that exports are falling. The depreciation of the yuan (about 9%) has certainly helped buffer some pain but not all. Pressures, they are mounting.

I’m prepared to wager that at some point the PBOC scour the room, see the BOJ in the near corner, stoically and determinedly taking a sledgehammer to the yen, they see the central bank of Korea in the far corner mumbling to themselves about letting go of the won, they see the ECB sitting on the bar stool munching on a frankfurter actively devaluing, and they come to the very sensible conclusion that burning the furniture to keep the house warm leaves you with toasty feet but nowhere to sit.

Thirty years ago they were sat on mud floors with no furniture. Today they sink into luxurious sofas as China’s GDP has been expanding at around 10% annually for 30 years (3x the global average), propelling an entire nation out of poverty. Are they going to squander away all their wealth when both economically and politically it would be very easy to release the pressure valve and let the yuan slide?

“…convinced that the cap on the franc must remain the pillar of our monetary policy.”

And 2 days later they abandoned the peg.

Why do I mention our cheese and watch making friends?

The PBOC has been regularly promising markets that there is nothing to worry about and that a devaluation is not in the cards.

“The Chinese government has no intention to stimulate export by means of devaluing the yuan, let alone waging economic wars. In reality, the yuan has retained basic stability to the currency basket, and there is no basis for its continued devaluation. We will carry on gradually implementing reform to the currency exchange rate setting mechanism, and we will maintain the yuan’s value at a rational, stable level,” Li said in a phone conversation with International Monetary Fund (IMF) Managing Director Christine Lagarde, according to a statement by the Chinese Foreign Ministry.”

Factors Working Against a Strong Yuan

The only question I have is the following and it follows on from a question raised and answered last week in “Am I too Late To Short The Remnimbi?”:

“Why should China be forced to suffer deflationary effects of defending its currency when everyone else isn’t?” — Mark Hart

Chris has founded and built several multi-million dollar businesses in the investment arena including overseeing the deployment of over $30m into Venture Capital opportunities and advising family offices internationally. Prior to this, Chris built a career at Invesco Asset Management, Lehman Brothers, JPMChase, & Robert Flemings.
MORE ARTICLES »
PrevPrevious“Am I Too Late To Short The Renminbi?” (And Other Questions Answered)
NextAsymmetry In Action: These Charts Are Most TellingNext