Will the Dollar Bull Market Catch You by Surprise?

A bull market in the US Dollar is underway and its magnitude and duration are likely to catch everyone by surprise. I believe it isn’t out of the question for the USD Index to advance by at least 50% within the next 5 years. If this forecast proves correct, there will be profound ramifications for the global economy and many financial markets, particularly emerging markets.

The Dollar Index has advanced by about 10% in the last 6 months, which is quite a sizeable move. However, if one takes a long-term view this isn’t a large move. What I am interested in is the USD trading sideways for the last 7 years. Usually when a market has been locked in a trading range for a long period of time a breakout to the upside signals the start of a long-term bull trend.

Note the long-term chart of the Dollar Index below – the bull markets in the early 1980s and late 1990s occurred after long periods of sideways movements. After some 7 years of “oscillating” around the 80 level it is about due for an extended period of upward movement. This isn’t hard to work out. It is the “collateral damage” of an extended bull market in the dollar that will be difficult to estimate! 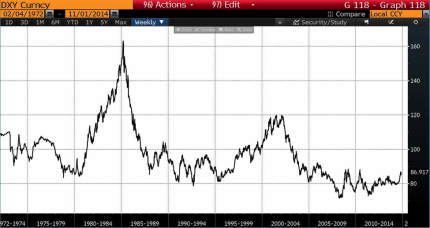 A rising dollar is indicating the relative strength of the US economy relative to other economies and it will no doubt be a leading indicator of rising interest rates. Given that very few are expecting or positioned for higher rates in the future, this will have very important ramifications for many financial markets.

This has already started to play out in a number of markets, particularly commodity markets. Although a number of commodity prices have fallen quite significantly from their highs of 2011, if the behavior of the CRB Index below is anything to go by, we may well see the average commodity price fall by another 50% within the next 5 years! 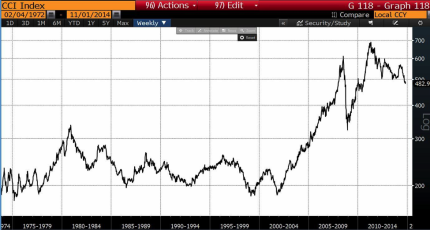 Even if I am wrong and commodity prices only fall another 25% it would still take the CRB Index back to its GFC lows of about 350 and this will have a profound effect on emerging markets.

This is where we need to tread carefully – the two previous US dollar bull markets have seen dramatic collapses in emerging market economies and financial markets.

The early 1980s saw the Latin American shock. The 1995-2001 bull market brought down Asia and Russia with the Asian Tiger Crisis (1997) and the LTCM crisis (1998) respectively, one could also include the Argentine default in late 2001 as well! In short – extended periods of USD strength are associated with emerging markets financial crisis!

It has been a while since we have witnessed an emerging market centric crisis. One of the most dramatic was the “Asian tiger” crisis of 1997. During this time many emerging market currencies fell by some 50% against the USD.

Note behavior of the JPMorgan Asian Dollar Index (Asian currencies against the USD) below. This index was trending down well before the crisis hit in October 1997, the crisis didn’t occur without a long period of warning! Also note the trading range with which it has been locked in for the last 4 years – the next move will be big and by all accounts it does appear to be to the downside! 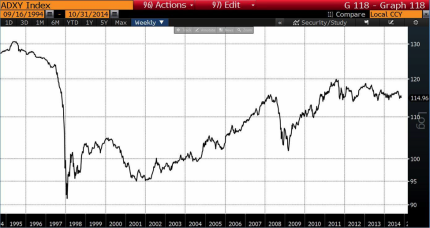 From great lows in volatility come great highs – or something like that. In July this year something occurred in currency markets that we haven’t experienced in at least a generation – “record” lows in implied volatility. Below is the JPMorgan Global Implied Volatility Index (think of it as the VIX of currency markets). It got to a record low in July. 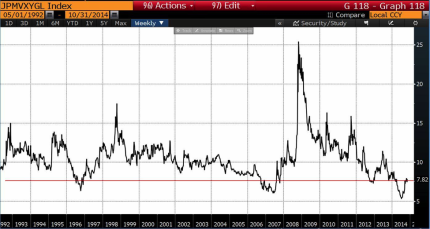 This index only goes back to 1992. So it is a “record” as from 1992. However, if the index did go back another 20 years I find it doubtful it would have registered any lower readings.

What is the big deal here, you might ask. Never before have currency traders been so unanimous in their belief that the USD would trade in such a narrow trading range – i.e. not move at all over the coming months. There could be a number of reasons for this but as far as I am concerned they are somewhat inconsequential!

I am a great believer in “contrarianism”. Contrarians live by the saying “when everyone thinks alike the opposite is most likely to happen”.

Why does this happen? Well, when everyone thinks alike there isn’t anyone left to think alike so by default the opposite must occur. That is easy. The hardest part is in being able to identify the extent to which everyone thinks alike. However, it is somewhat of a dead giveaway that everyone is thinking alike when a record low in implied volatility occurs!

So from a behavioral perspective currency markets are entering a period of increasing volatility, extreme lows in volatility usually lead to extreme highs so get ready for the ride!

The current level of implied volatility isn’t high by historical standards. This means that if someone wants to express a bullish view on the USD the most efficient way to do it is via long-term options.

Fundamentally – what supports a bull market in the USD and an eventual crisis in emerging markets? I previously touched upon this in my writings on the Singapore dollar and the Chinese renminbi, but in essence it is the “unwind” of the carry trade.

We would be delusional to imagine that the capital flows that have poured into emerging market real estate, local currency bond and equity markets will be immune to an appreciating US dollar and some rise in US interest rates.

I will quote Ambrose Evans-Pritchard’s latest article in the Daily Telegraph to shed light on the carry trade:

The dollar revival could prove painful for companies in Asia that have borrowed heavily in the US currency during the Fed’s QE phase, betting it would continue to fall.

Data from the Bank for International Settlements show that the dollar “carry-trade” from Hong Kong into China may have reached $1.2 trillion. Corporate debt in dollars across Asia has jumped from $300 billion to $2.5 trillion since 2005.

More than two-thirds of the total $11 trillion of cross-border bank loans worldwide are denominated in dollars. A chunk is unhedged in currency terms and is therefore vulnerable to a dollar “short squeeze”.

The International Monetary Fund said $650 billion of capital has flowed into emerging markets as a result of QE that would not otherwise have gone there. This is often fickle “low-quality” money that came late to the party.

Many of these countries have picked the low-hanging fruit of catch-up growth and are suffering from credit exhaustion. They have deep structural problems and a falling rate of return on investment. The worry is that a tsunami of money could rotate back out again as investors seek higher yields in the US, possibly through crowded exits.

Let us not forget that the US Dollar was in a bear market for some 10 years (from 2001 to 2011). Yes, one could argue over a year or two but at the end of the day the USD has been out of favour for a very long period of time. Given all the “death of the USD” commentary that was being bantered about up until a couple of months ago, it is hardly surprising that a huge complacency grew towards a multi-year bull market in the USD.

Therefore, the magnitude of the carry trade “unwind” is likely to be way underappreciated. Holders of long term call options on the USD against emerging market currencies are likely to be pleasantly surprised over the coming months.

“The chart of the US dollar is by far and away the most important chart on earth.” – Raoul Pal

After managing high net worth private client funds at Henry Ansbacher, Brad managed a proprietary trading book for Rand Merchant Bank in South Africa & Australia. Brad’s speciality is in identifying opportunities in extreme out of favour themes globally and executing strategies to achieve asymmetric payoffs
MORE ARTICLES »
PrevPreviousWhy I Want My Kids to Grow Up Puking
NextThis is Real and It’s Happening with Breathtaking SpeedNext

Excellent analysis, agree with every word. A lot more pain on the way and for longer than anyone invested in anything outside the USD can imagine or will be able to tolerate. But as I am writing the USD has become TOO POPULAR and will now reverse and go into a SHARP correction, any rally now above 1.2500 in the EURUSD is your signal the tide has turned again against the USD, This time in a correction that will set up a fantastic buying opportunity for the even bigger and longer run down the road taking the USD way higher.

Hello Ronnie, yes a “correction” in the recent ramp up in the USD wouldn’t surprise me…..but what happens if we don’t get the correction and it keeps moving dramatically higher – this is why we like long term 1-2yr options on the USD so we don’t have to worry about short term noise

With a record number of speculators betting on a higher U.S. dollar, the opposite must happen the U.S. dollar index plummeting below 80 by early 2016 or sooner.