In this week’s edition of the WOW: Crypto Currencies Go Ballistic

I’ve received at least 5 emails on this topic now.

What on earth is going on with the Altcoins?

Here’s one message I share with you from a particular gent who, apart from being a thoughtful, intelligent, and successful guy, has more hair than me:

Just curious, have you been following crypto-currencies – the altcoins in particular ?  There are two very interesting developments under way:

The growth in the overall value of the crypto-currency markets makes me wonder if we reached an inflection point where the ‘dam has broken’ so to speak and a flood of money is about to pour into this market (n.b., SEC has agreed to revisit the Winklevoss Bitcoin ETF application as well as an application for an ETF that would invest in ETH).

The reasons behind the performance of the altcoins is something of a mystery to me.  I get it that the likes of Microsoft and Chase-Morgan announced they would be backing ETH which would explain its increase in price, but I do not know why the other altcoins have done so well especially relative to BTC.  BTC is about the only crypto-currency the vast majority of the investing ever has heard of and yet major amounts of money are flowing into the altcoins yet I have no idea how more than a handful of people with substantial amounts of money even know about these altcoins let alone why they would have invested in them.

FYI – I have begun diversifying into ETH.  It’s now 13% of my crypto-currency position.  I also am planning to take small positions in many of the other altcoins listed below over the next few months. 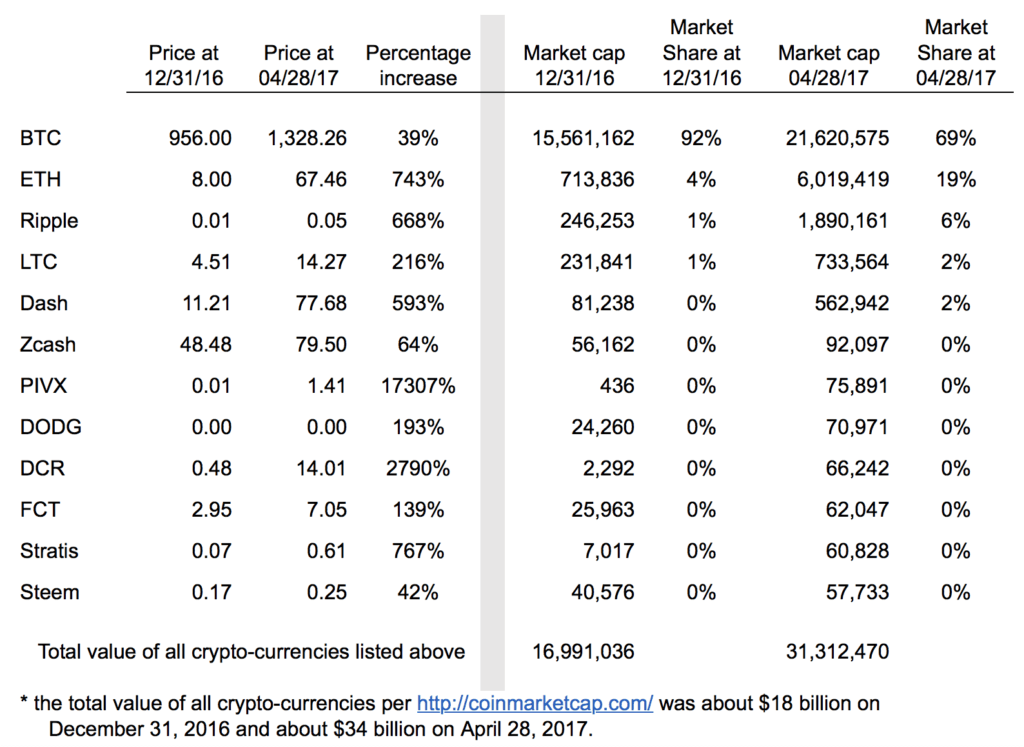 Take a look at the Bitcoin market cap: 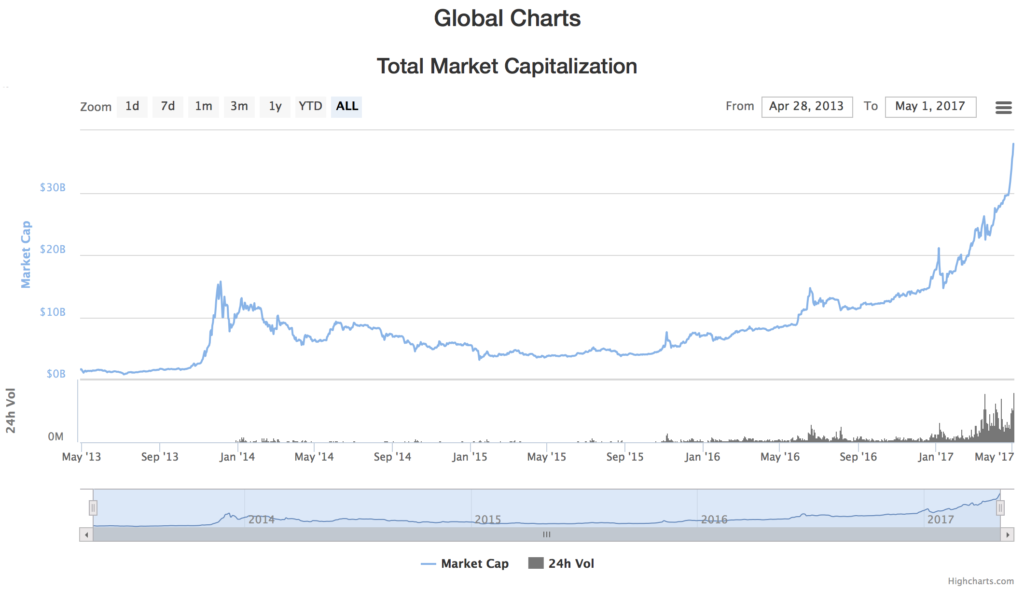 And this – all the altcoins combined market cap: 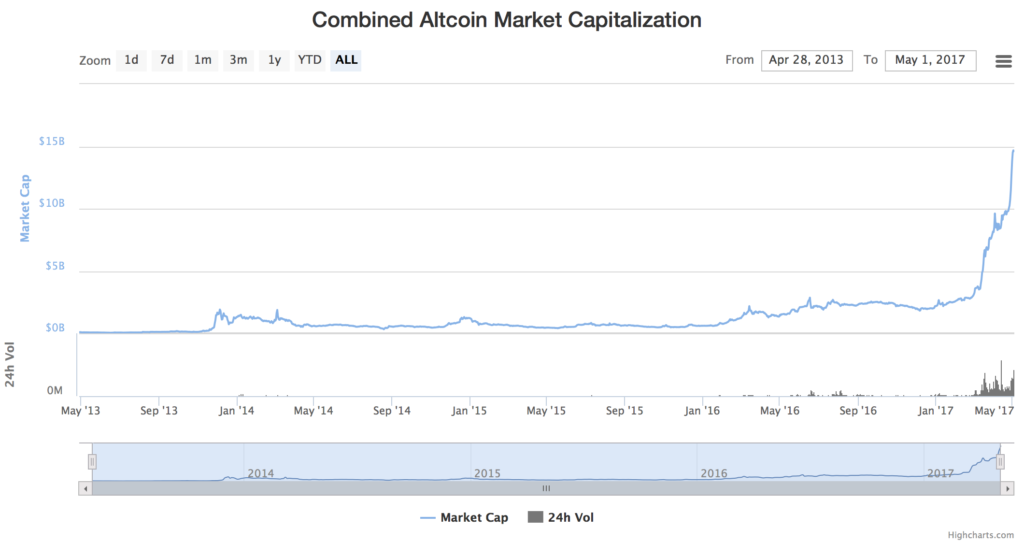 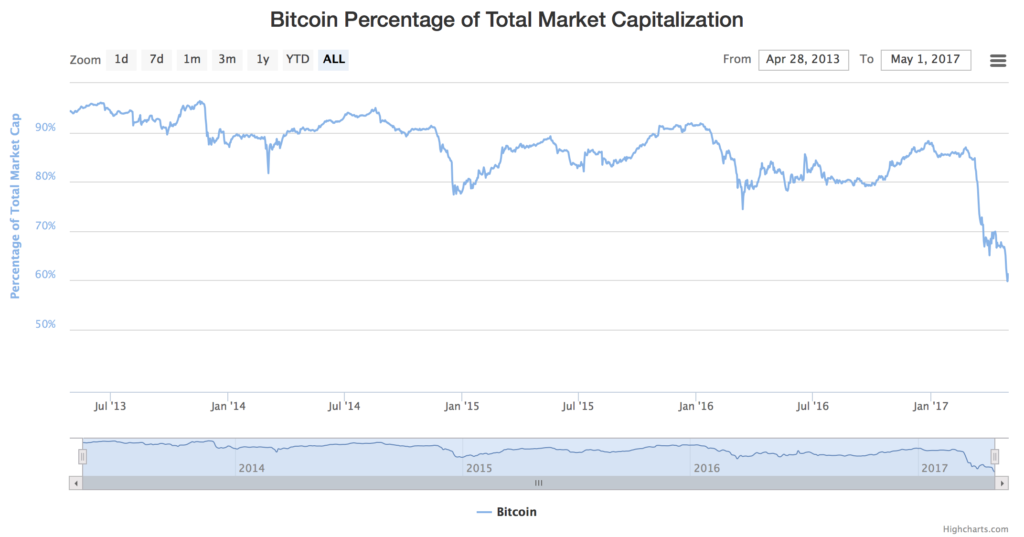 Ok… so this presents a host of questions.

Let’s Start With What We Do Know…

Bitcoin, which I’ve written about extensively, got one helluva boost in the last week, rising to over US$1,400. Now, this was pretty easy to figure out. All it requires is curiosity, a stubby finger, and Google.

With those three things we can see that about 50% of trading volume in the 24 hours leading up to this record breaking rally came from the Bitcoin-JPY exchange rate.

We also know that our sake drinking friends recently deemed the cryptocurrency a legal form of payment. It seems that, given the option of holding yen and BTC, Mrs. Watanabe did some math.

Then, over in the land of trigger warnings, safe spaces, and rioting-latte-drinkers we had the stern-faced suits at the SEC suggest they’d be reviewing their decision for Zuckerberg’s-old-buddies-proposed ETF, the Winklevii brothers (plural).

All obviously bullish for Bitcoin. No surprises there.

As my friend mentions in the article above, we’ve got the likes of Microsoft and the vampire squid’s half brother JP Morgan backing Ethereum so it’s easy to see why Ethereum got a shot of espresso.

What About the Others?

I suspect it’s a momentum driven “who’s next” game being played, though I profess I’m largely unencumbered by knowledge when it comes to the hundreds of altcoins out there.

Here I lean on a friend, entrepreneur, fellow investor, and super nice guy Rolf Versluis, who wrote an excellent piece on altcoins. Read it. You will be better of for it… and probably more attractive, too.

Blockchain is here to stay.

Anyone that thinks bank issued fiat currency as we know it today is going to still be with us in the next 50 years or likely less simply isn’t paying attention.

Central banks absolutely will begin to use a blockchain to create their own currencies.

The simplest way for any central bank to do this right now would be for them to fork the Bitcoin protocol into a new protocol that is unchanged, except that the central bank would set and adjust the block mining reward as they see fit – not unlike modern day paper currency.

The Bank of England are already working on this, as discussed in this article.

Now, any blockchain could be used. It doesn’t have to be the Bitcoin protocol as India proved with Indiastack.

Central bank A creates its own crypto currency, forbids the use of any others. Not any different from the situation today, except that it’s fiat currency which individuals are forbidden from creating.

The monetary system is held together by termites and desperately needs a fix. QE and negative rates haven’t done the trick and instead have left us with unimaginable debt loads.

Like the chubby boy north of Seoul, they’re running out of options.

This is not to mention the unprecedented level of transparency a government would have with a crypto-currency. Every single transaction that takes place is irrefutable, tracked, and registered on the blockchain. Taxation could take place at source. A few lines of code would solve that problem.

Forget about banning cash, which can be transacted hand to hand as well as via the banking system.

With a crypto-currency everything would go through the chosen protocol meaning that when you buy that “pleasure toy” for your wife or shell out for drug rehab for your wayward cousin, it’s all recorded, registered, archived – ready to be mined by “algos” which will eventually preclude you from buying too much booze since your health insurance won’t permit it.

Bliss to sociopaths from Washington to Beijing and everywhere in-between. Not only can taxation take place at source but try speak out against the establishment and watch them seize your entire net worth with a click of a button.

At a policy level: think of the immediacy of data provided to policy makers, who – though they have proven completely inept at managing an economy – will see a treasure trove of granular data and think to themselves, “whoah Janet, this is exactly what we’ve needed all along”.

Undeterred by a wall of evidence suggesting they’re buffoons incapable of walking your dog and with a new set of tools they’ll gleefully set to work.

The blockchain, when compared to their existing toolbox, will appear to be what a chainsaw is to scissors. Whoopeee!

Can you feel the onrushing Orwellianism?

Fools will say, “If you are not doing anything wrong, you have nothing to fear.” This is 100% true and completely plausible, if government were benevolent. It’s not.

Right now we don’t know whether governments will succeed or not.

We do know that the technology allowing for such a world exists. In a situation where things really come unglued it’s possible their legitimacy comes into question and – combined with their inevitable incompetence – paves the way for something entirely different.

Remember, these discussions we’re having here are based on technology which only a decade ago never even existed.

When gunpowder was created it would have been easy to extrapolate a view as dystopian as ever.

Maybe we get lucky and we find a world with more, not less freedom. The jury’s still out.

Question for the Week

“The entire human populace is now taking charge of the means of production and changing the rules of the game. They’re making their own freaking currencies, for God’s sake.” ― Paul Vigna, The Age of Cryptocurrency: How Bitcoin and Digital Money Are Challenging the Global Economic Order