World Out Of Whack: Iceland, You Won’t Believe It

In this week’s edition of the WOW: Iceland

The developed world is going to hell and probably deserves it. Today, I’m going to show you what should have been done both during and post the GFC. That it wasn’t, and now almost certainly won’t, is a problem for us all but that’s a story for another day.

Today, we look to Iceland and marvel at what they managed to accomplish both leading into the GFC and then coming out of it, and then we scratch our heads at the latest news just out from their central bank.

On with it then…

It was over a decade ago now when I very nearly took a flight to Reykjavik but at the last minute opted instead to go to Copenhagen, which I regret since I’m told it’s like Scotland on steroids (sounds like a blast). What clinched the decision in the end was that a scotch was about 3 times the price in Reykjavik, and since I was heading out for a wild boys week this was important in our considerations, though I’m told that in the land of fire and ice the women are indeed unbelievable.

Its history is that of an arctic backwater reliant on fishing fishing, energy, aluminium smelting, and tourism. A place with hardy living conditions and hardier people.

Between the late 90’s and 2008 they, however, went through what can only be described as a stratospheric rise from this backwater specialising in fishing to one which specialised in global finance.

Using the Irish financial model as a blueprint, Iceland decided to revamp its economy repositioning itself in the international community as a low-tax jurisdiction for foreign finance and investment.

Iceland’s big three banks – Glitnir, Landsbanki, and Kaupthing – grew exponentially as deposit rates in the teens meant investors could borrow in foreign currencies such as sterling, euro, and dollars and earn a significant spread on the yield differential investing in various bond issues from the Icelandic banks.

The influx of capital had the effect of pushing the Icelandic krona into the stratosphere, rising 900% between 1994 and 2008. So not only did investors make a massive spread on the yield differential but the capital appreciation on their investment alone was huge. A lot of people made a lot of money.

As so often happens when money is easy, banks went on a debt fuelled buying spree acquiring international assets and commencing outlandish developments such as the Harpa concert hall funded by Landsbanki and touted at the time as Europe’s largest glass building.

Things got so crazy that by the time the collapse came, triggered by the Lehman bankruptcy, Iceland’s banking system held assets worth 10 times that of the entire country’s GDP.

And THAT fact is, I believe, why today Iceland is faring relatively well.

Too Big to Bail Out

The fact of the matter is that the banks were actually just far too big to bail out. Even if the Icelandic government had wanted to, they simply couldn’t bail them out… and so they didn’t. The CBI couldn’t possibly be the lender of last resort for a banking system ten times the country’s GDP and spread over many countries.

There was a lot of angst at the time and depositors lost their money. In an amusing side story Alistair Darling, then chancellor of the exchequer in the UK, used anti-terrorism powers to freeze Landsbanki’s UK assets.

I mention this just in case you’ve ever mistakenly thought that governments would never do such a thing to the private assets of a private institution from another country. You know… in a developed world country where the rule of law is, ahem, “sacrosanct”.

In any event, there are 3 key aspects to why Iceland is today doing relatively well today:

1. They let their largest banks fail, and with it the stock market went from “oh my God, are you kidding me” expensive to “dear mother of Mary” cheap. 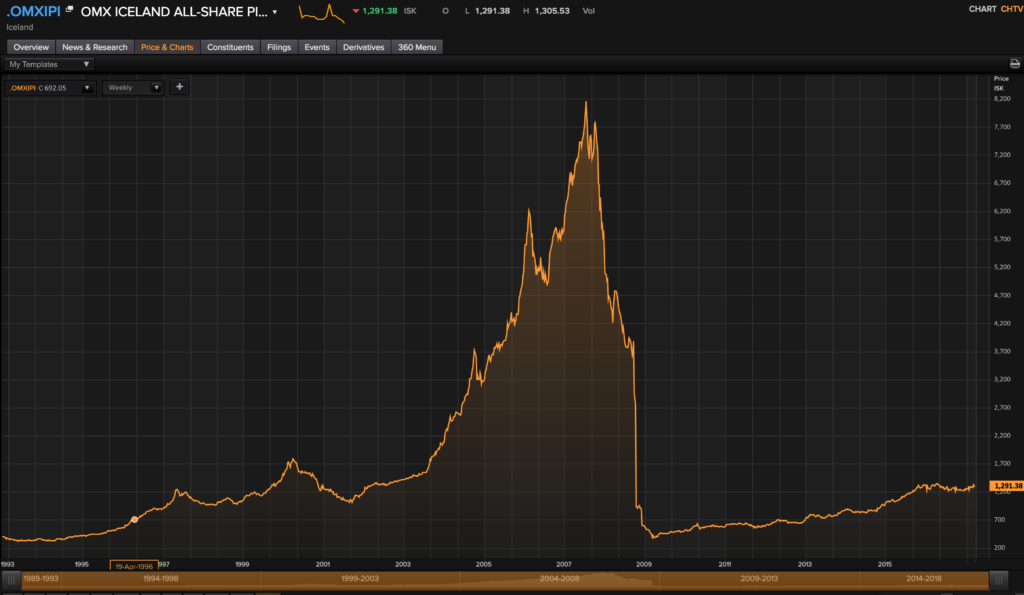 2. They let their currency collapse. Within days of letting the banks collapse, the krona (graph below) collapsed and over 80 percent of the financial system blew away in the Icelandic wind and almost all businesses on the island went belly up.

The stock market shown in the graph above fell by over 95 percent and interest payments on loans exceeded 300%. Whoopee! Can you imagine locking in a yield on a debt instrument at 300%? Over 60 percent of bank assets were written off within a few months after the banks collapsed and interest rates hit 18 percent in order to curb inflation. 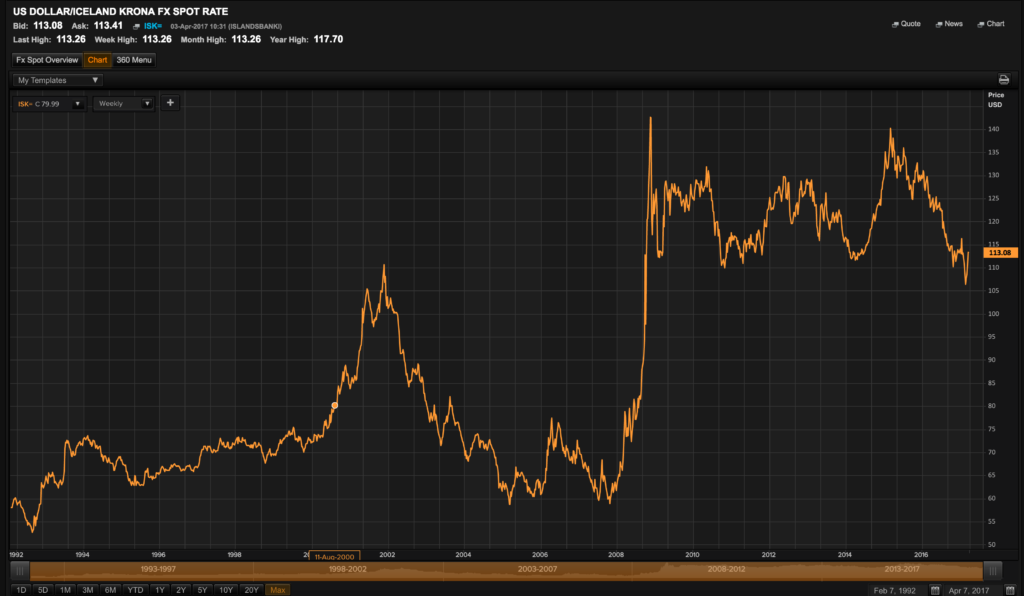 3. And then they imposed capital controls

Pretty much all the things that every government economist said “shouldn’t” be done they did.

In between all of this they threw out the government in what was called the “pots and pans revolution”.

Now, I suspect Paul Krugman will disagree here as what I’m going to suggest is both fact as well as common sense, a prerequisite if ever there was one for a conflict with Krugman’s ideas.

This is not my opinion. This is fact. This happened. Sure, there was the typical government doing the typical stupid things like trying to bail out smaller banks and such but in principal the system cleared.

Fast forward today and Iceland has come out the other side and here is what it looks like.

Unemployment rates after just 12 to 18 months began falling and haven’t looked back.

While Iceland let their banks fail they did take on loans from the IMF and others, which saw government debt explode higher (they took on about $10bn in debt – roughly the size of the country’s GDP).

And while I can’t say I agree with them doing so, the fact is that almost a decade later their debts are increasingly under control and falling relative to GDP. Why? Because the private sector was allowed to begin to grow again from a stable (un-indebted) base.

The economy has been growing steadily and is now the envy of their European cousins.

In large part Iceland let the system clear. They did so because they were forced to. I’m pretty sure that if they’d had the ability to bail out the largest banks and follow all the failed policies the rest of the developed world seems intent on doing, they would have. I’m just glad they didn’t, and today, I suspect most Icelanders would agree.

It’s not a perfect setup but it’s starkly different to how Western governments have dealt with the crisis and the results are telling.

So Here is the Question…

Having a free floating currency and watching it collapse 80% acted as an immediate release valve for Iceland. I’m not sure their central bank understands this. It appears not since they subsequently imposed capital controls, which was like locking the barn door after Flicker had already made it off into the starry night.

Pray tell, what jumping onto the deck of the Titanic hours before the band stops playing is meant to do for these fine folks?

“Iceland instantly became the only nation on earth that Americans could point to and say, ‘Well, at least we didn’t do that.’ In the end, Icelanders amassed debts amounting to 850 percent of their GDP.” ― Michael Lewis, Boomerang: Travels in the New Third World

Chris has founded and built several multi-million dollar businesses in the investment arena including overseeing the deployment of over $30m into Venture Capital opportunities and advising family offices internationally. Prior to this, Chris built a career at Invesco Asset Management, Lehman Brothers, JPMChase, & Robert Flemings.
MORE ARTICLES »
PrevPreviousMayhem At Your Fingertips
NextAn “Investment” Even More Ludicrous Than Government BondsNext