World Out of Whack: This Is What Lies In Store For France

In this week’s edition of the WOW: Le Pen. But then what?

On the 7th May France will have a new political party complete with a shiny new President and then everything will get better, right? Why don’t we take a look. But first…

The bond market is finally waking up to what I outlined some 7 months ago in 7 steps to the easiest short in recent history.

A couple of snippets as a reminder…

With respect to the rise of the right:

“Those who state the obvious gain ground not because they’re smarter, necessarily have better ideas, or are virtuous, but because they bring to the attention what citizens can see with their own eyes.”

And as I write this to you now we have this:

Another wee snippet from that same article from last year – on how the voting masses will be swayed:

And so while the media retain a near complete blackout of the daily mayhem sweeping Paris’ previously genteel streets, the MSM are simply making themselves increasingly irrelevant. Sources of mine in Paris tell me the rioting has been going on for a week solid and yet the media coverage has been scant. Parisians themselves can’t understand it and with it their trust in the status quo erodes.

Except perhaps for octogenarians the average Joe (or Pierre) increasingly source their news via social media channels and alternative media sources. Chairman Trump understood this trend and played to its advantages by completely circumventing traditional media channels and delivering his message via alternative media. The ROI was epic. The elites are still scratching their heads, wondering how the hell it all happened. Bless them.

The more the MSM refuse to report on the issues which Parisians see when they step out of their door or that they hear about when they receive that call from Aunt Sofie telling them that her neighbourhood looks like Mogadishu, the more they lean right.

When trust is lost, it’s over. The existing kleptocrats in Brussels are so far behind the zeitgeist curve that pulling this one back is going to take the kind of fancy footwork that would put Maradona to shame. The odds look increasingly dismal that they’ll be able to do so.

Scenes such as this play directly into the hands of madame Marine Le Pen.

If you doubt that she’s going to win then you’ve not been paying attention. This isn’t solely a French issue. It is the rise of the strong men.

We can see that the bond market is coming to terms with these realities. 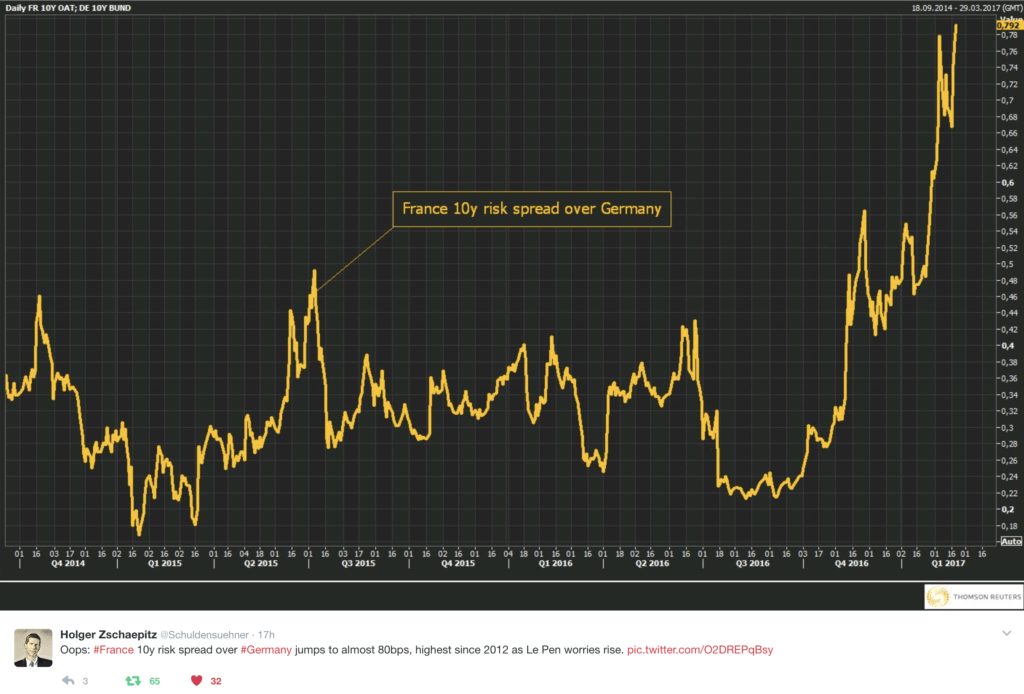 So the bond market is beginning (finally) to price in a Le Pen victory, complete with all the promises she’s making on the campaign trail, not least of which is exiting the Eurozone and exiting the euro.

And so capital is shifting into German bunds and out of French bonds. Fine but before you think this is a trade to jump into I’d suggest considering timeframes.

Let me remind you that Germany kicks Merkel to touch on the 24th September, a mere 5 months after the French elections. Pray tell what the holders of German bunds do in 5 months time? Incidentally, 2-year yields have just collapsed to -0.87% on a shortage of bunds. Isn’t this exciting?

It’s as if Germany doesn’t have the same set of problems France has. Think it through.

Ultimately there’s one home for this capital folks and it isn’t in Europe.

Anyway, today let’s take a look at what life with madame Le Pen at the helm of Europe’s 3rd largest economy could look like.

Le Pen’s secretive economic plan was recently unveiled for all to see. I’m not sure why it was so secretive. There’s nothing particularly “new” in the plan that hasn’t been tried before. Clearly Le Pen and her economic advisors have been vacationing with Robert Mugabe and Nicolas Maduro.

Let me summarise them for you.

A fustercluck of state interventionism, which will absolutely 110% require money printing – like the Italians used to before the Euro. God bless those times. Didn’t we all love a good devaluation making those Mediterranean holidays so much more enjoyable? Well, it looks like the French Riviera is soon going to be on sale. Give it a couple of years.

There are a dozen other initiatives each of them more scary than Glenn Close in Fatal Attraction. Funniest of all, though, has to be “intelligent protectionism”, an oxymoron if ever there was one.

France, already wildly uncompetitive, will become more so. How can it not?

Exiting the euro is going to involve a divorce from hell. There is no easy way to do this folks.

Capital controls will have to be implemented. In the hype and hope of a “new France” the hoi polloi will probably go for it, realising too late what has happened as their savings are vaporised in favour of the state.

Make no mistake: Le Pen isn’t about “the people” but about “the French state”. The difference couldn’t be more dramatic.

The cost of capital will soar as free market mechanisms are constricted.

This will be a disaster for France, a country with private debt levels of 229% of GDP. A significantly weaker franc won’t do much good as the public sector will crowd out the private and access to capital and credit will decline faster than the newly issued franc is declining, which is probably saying something.

The idea that an already bureaucratic socialist, interventionist, and increasingly unproductive system needs more, not less interventionism, needs more state control not less, needs more money printing, not less, could only be dreamt up by complete morons. Sadly, that is what lies in store.

This has all happened before folks. Go read your history books. A 5-year old can tell you that in order to bake a cake you put in certain ingredients and you come out with a tasty cake.

Le Pen’s ingredients are going to bake an economic disaster. France is going to be like Argentina under Kirchner without the good steaks and the collagen enhanced lips.

I’ve got my own thoughts on how best to play this over the coming months and years but if someone provides me with an excellent asymmetric idea which upon researching I use, I’ll give them a complimentary subscription to Insider. And if an existing member provides it, I’ll grant a free renewal. After all, we’re all in this to profit, despite what the likes of Le Pen decide to do.

“The FN has absolutely no chance of winning power. Its score in the second round will hover around 30 percent, perhaps 35 per cent – not more” — Patrick Buisson, ex-president Nicolas Sarkozy’s former key adviser

Chris has founded and built several multi-million dollar businesses in the investment arena including overseeing the deployment of over $30m into Venture Capital opportunities and advising family offices internationally. Prior to this, Chris built a career at Invesco Asset Management, Lehman Brothers, JPMChase, & Robert Flemings.
MORE ARTICLES »
PrevPreviousBucket Economics In Global Macro
NextTrump And Russia: Just Pointing Out The ObviousNext