Him: “This market is absolutely 100% gonna crash.”

Me: “You sound so certain?”

Him: “Just look at the valuations.”

Me: “Pricey valuations don’t always culminate in a market crash. There are other factors to consider.”

Him: “Trump trade is over, and I’m now 50% hedged on US exposure and net long EMs. Plus, the dollar is finished. It’s gonna be ugly.”

This conversation went on for some time. I was talking with a well known hedge fund manager (who will remain nameless) and the main topic was the US equity market.

His view is typical, but I’m not sure he’s correct. 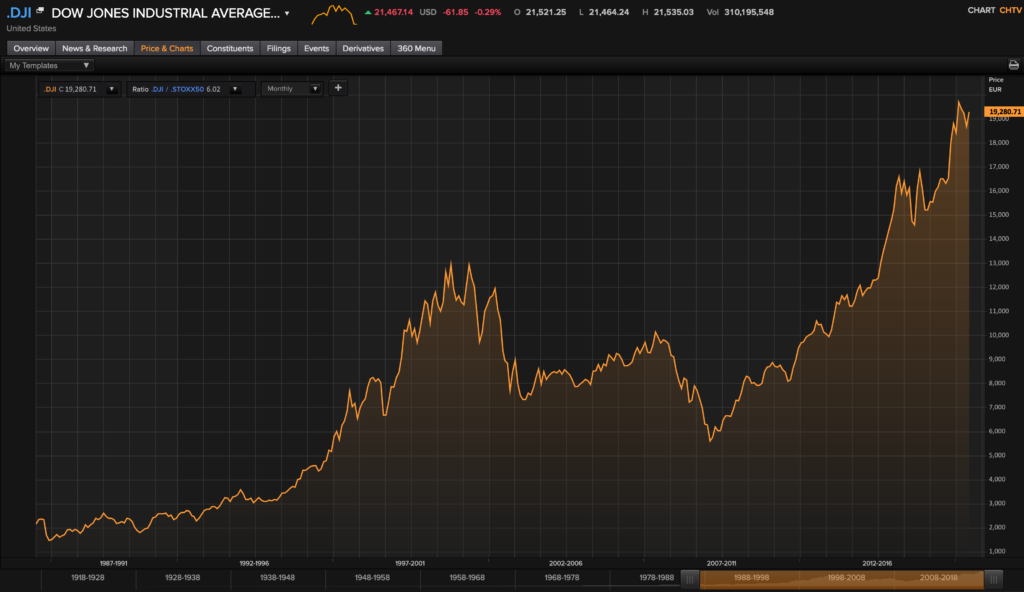 A bull market ever since 2008. Overvalued? Sure, but wait…

Here’s institutional investor sentiment as reported in the FT: 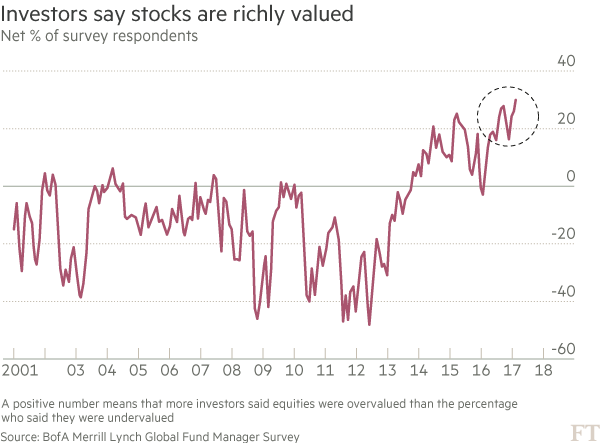 “According to the survey , which questioned about 200 investors who manage almost $600bn of assets, just 10 per cent expect tax cuts to be passed before Congress breaks for a summer recess.”

And here we are looking at the Sentix survey. In blue is the market bias or confidence and in grey the equity market: 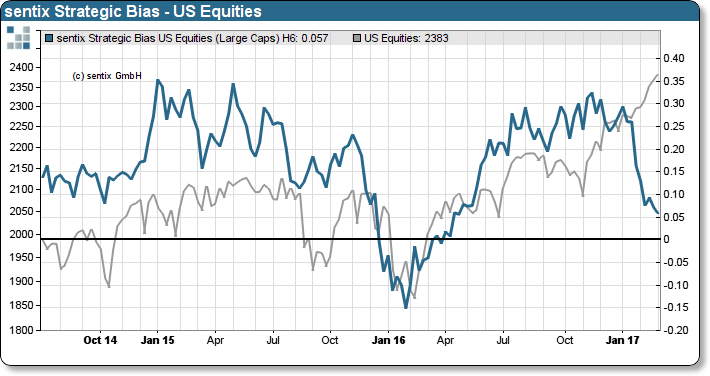 The divergence is significant. In short, investors don’t believe in the current bull market. That may be a problem only if everyone is already long. They’re not.

Institutional money is bearish and retail participation at just 54% is a hair off all time lows of 52%. Going into 2008, this stood at 62%. This isn’t how bull markets end, folks. A pause in a rally? Sure, but no stock market crash.

What is rarely discussed is that we live in a relative world, not an absolute one. Only if you’re dining at a steak house, do you have to eat just steak. If you’re sitting at a buffet table, you make your choices based on what’s on offer.

Let’s step out of the steak house and step up to the buffet table.

Let’s look at fixed income. Here’s the yield on the US 30-year: 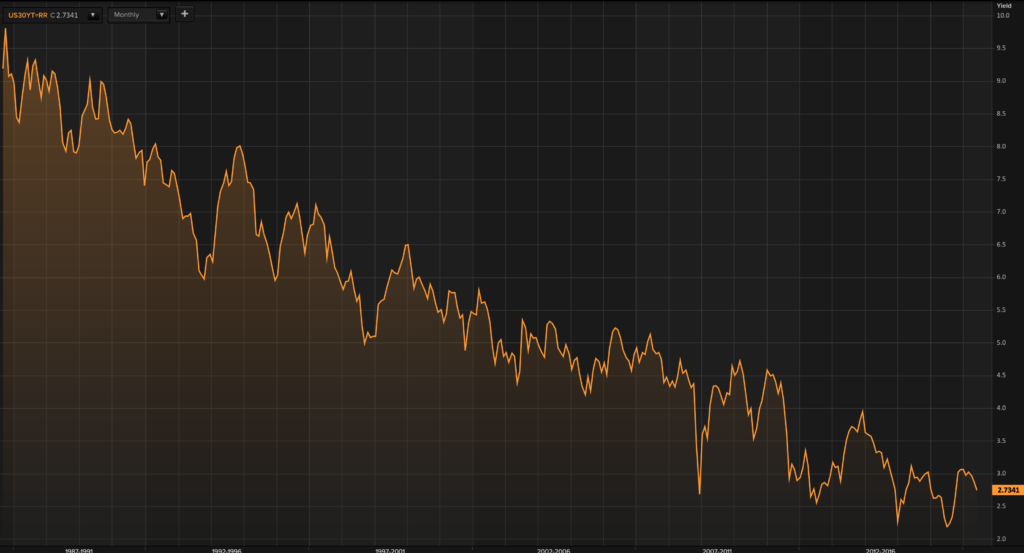 And the German 30-year Bund yield: 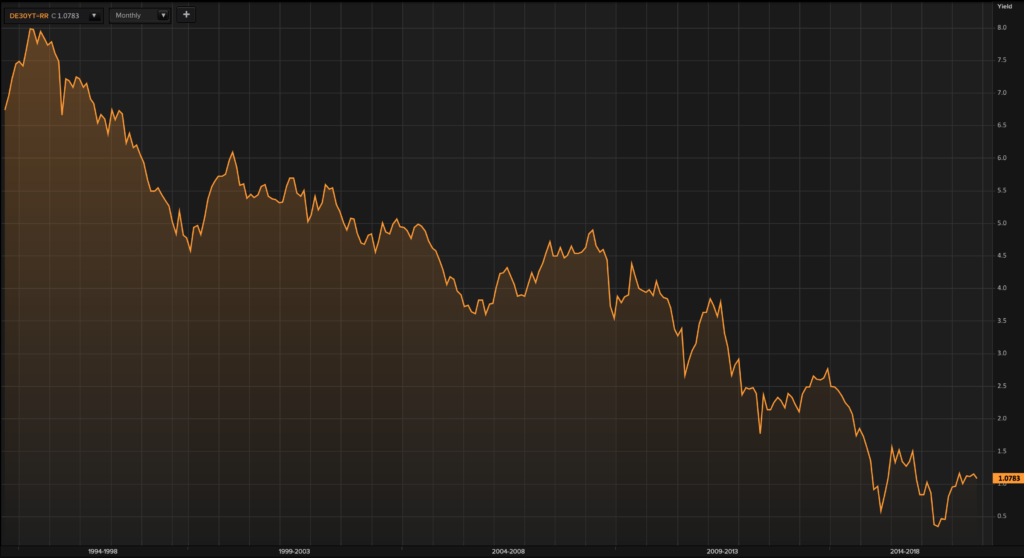 I could toss in the Japanese bond yields and Gilts and you’ll see the same thing.

In fact, let me point out that the Government of Argentina.

Yes, Argentina – a country well known for repeatedly cocking up their finances and defaulting on their debt. Well, they just managed to pull off the sale of a $2.75 billion worth of 100-year bonds with a coupon of… get this… 7.125.%.

Surely, a country with a history of repeated defaults struggled to sell the bond? Nope. According to the FT, “the bond attracted $9.75bn in orders from investors.”

This is a good opportunity to remind ourselves of something, especially when diving into the EM world. There are a few risks with a bond. There is duration risk, default risk, and the other is currency risk.

Here is the dollar against the Argentinian peso: 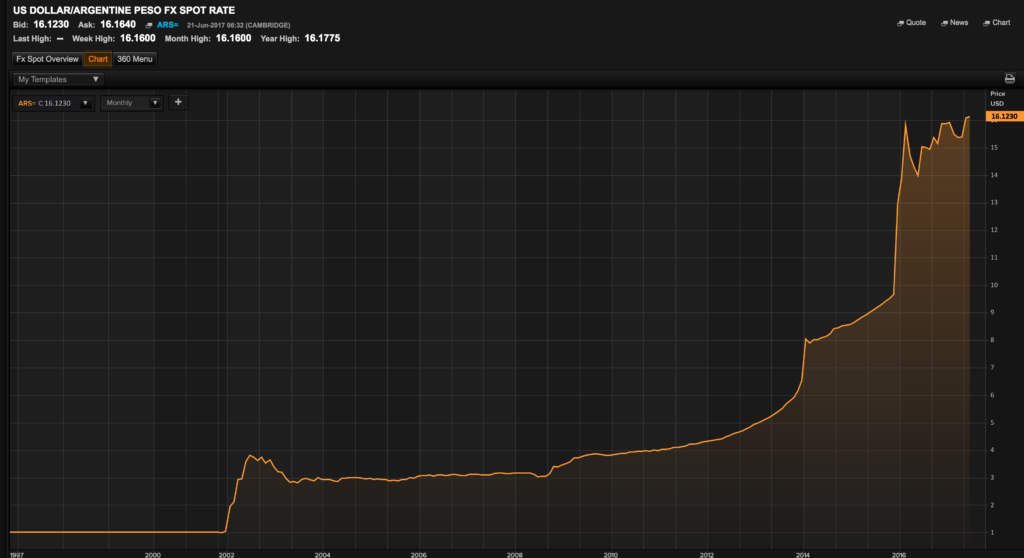 Equity markets may well be overvalued but realise that capital has to go somewhere and if, like us, you’re looking for asymmetry where risk is low relative to reward, then shorting the equity markets makes bugger all sense in this environment.

I’ve pointed out only two major markets here, albeit the two largest – bonds and equities. But viewing one market on its own is a really dangerous way to look at markets as they are all interconnected and a framework for all the moving pieces is needed. The bubble, in case you haven’t realised it, is in bonds.

Which brings me to my question for the day:

“Eight times in its 194 year financial history has Argentina defaulted on its borrowings, most recently in 2014 amidst its dispute with creditors from its prior episode of financial ruin in 2001. At its historical pace, the soon to be-issued 7.125s of 2117 (priced at $90 to yield around 7.92%) will default more than four times over before that so very-distant prospective maturity date.” — Philip Grant of Grant’s Interest Rate Observer