World Out Of Whack: Shaky Ground

A quarter of a million bucks is nothing to turn your nose up at. And that’s about how much I’d be out of pocket if I was to be so unfortunate as to have a home in Kaikoura, a speck of a town on the South Island of New Zealand, which itself is a freckle on the face of Australasia. I hear there are actually people living there but thankfully not many. I say thankfully because they got one helluva shake the other night.

So much so that it measured 7.5 on the old “shako-meter, and far north of Kaikoura on an entirely different island we had a 2AM tsunami evacuation ceremony complete with wailing mentions that “but Fluffy can’t swim” which, come the worst, wouldn’t help Michael Phelps let alone furry four legged animals. 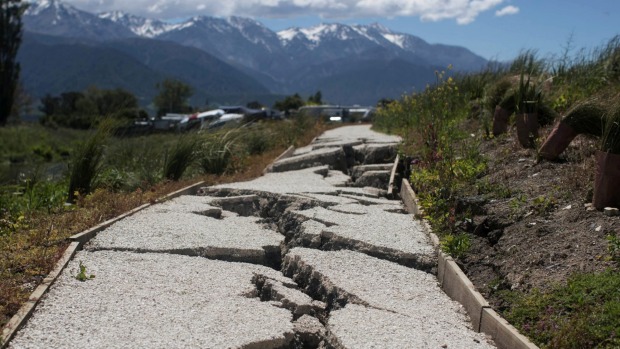 It prompted me to take a closer look at some existing insurance policies. Lo and behold, I’d not looked at them in a couple of years and during this time high six figures have been added to insured assets.

That’s what happens. You pay no attention to things you think are trucking along just fine and then bam, all of a sudden with lights blaring and sirens flashing low risk turns into “holy mother of Mary whowouldathunkit risk”. Now don’t get me wrong, there hasn’t been a tsunami here in… well, forever. But that doesn’t mean one isn’t coming though the odds aren’t exactly all that high. Nevertheless, insuring a home for full value is common sense.

The thing with insurance policies on things like homes is that they’re typically fairly quantifiable, which is what makes insurance businesses such great businesses. Men with large brains, brown suits, and no personality are paid a lot of money to price the risk and they typically do a good job of it.

Gratefully the pricing of event risk in financial markets doesn’t rest purely on acts of God but rather on an entire market of participants. Participants who repeatedly get caught up in folly.

In other words it’s where when dispassionately viewing something you think to yourself “heck, this doesn’t seem right”.

And speaking of things which don’t seem right, the following chart is worthy of your attention:

This, folks, is what the biggest weekly move in 30 years for the good Dr. Copper looks like.

I mentioned it briefly last week when we took a look at the most important charts for the post-Trump market reaction. Dr Copper has moved more than 20% in just a few days and though you can’t see it from this chart it is still below its 2011 highs.

So while a Trump victory was unsurprising, even “ensured”, copper caught me by surprise. We’d been watching the consolidating wedge formation pre-election thinking “ah, yes this is beginning to look interesting…” and “then there’s the fiscal stimulus that’s coming” but in truth we didn’t expect what we got. A reminder if ever there was one that risk happens fast.

Hindsight being a wonderful, if not underused thing, it shouldn’t have been surprising. We’d anticipated a Trump victory and yet we’d not taken second level thinking to its logical conclusion. Worthy of a slap around the back of the head, I dare say.

As I mentioned last week, the traditional safe haven trade has been to buy bonds. This would make perfect sense in any world where government finances didn’t resemble Mugabe’s Zimbabwe. And in fact it does make a little (but only a little) sense purely for liquidity reasons. In other words if, unlike you (presumably since I never know who ends up reading this) and I, you need to move a few billion dollars quickly, then seeking safety in the shiny stuff is a tad more difficult purely for liquidity reasons.

Events such as Brexit and the US presidential elections provide an opportunity to watch the markets’ reaction to these events, which in turn helps us identify or confirm potential changes in the zeitgeist. Changes which more often than not represent the new hedge, and when new hedges come into play – especially when it’s been out of favour for an eternity – the premiums go from low to whoah!

For some context: Remember that the collapse of the mid-2000s housing bubble set the stage for the subsequent commodities boom.

Commodities, it was reasoned, were a safer bet after the bubble economy saw housing in the US, UK, Ireland, and large parts of Europe collapse. Now, of course there were other factors such as rapidly growing emerging markets which contributed but the point I want to make is that the old boom led way to a new boom in large part driven by fear.

If I didn’t know better, I’d say that the market reaction thus far is skewed towards stagflation (rising inflation with weak economic growth). If you disagree, and before commenting on the blog here giving me all the reasons this won’t happen, I’d invite you to consider the policy moves taking place not only in Trumpland but elsewhere in the world. Then I’d invite you to pull up some long term charts on commodities.

And so our goal here is simple: protecting the majority of our wealth from the inevitable consequences of absurdity, while finding the most asymmetric investment opportunities for our capital. Ironically, such opportunities are a result of the actions which have landed the world in such trouble to begin with. If you would like to invest alongside me learn how here.

Chris has founded and built several multi-million dollar businesses in the investment arena including overseeing the deployment of over $30m into Venture Capital opportunities and advising family offices internationally. Prior to this, Chris built a career at Invesco Asset Management, Lehman Brothers, JPMChase, & Robert Flemings.
MORE ARTICLES »
PrevPreviousInsights From One Of Asia’s Top Hedge Fund Managers
NextWhen Government Data Can’t Be TrustedNext