In this week’s edition of the WOW: Trump Wall – How Exactly?

How many people voted for “Herr Von Trump” because he promised to build a “great and beautiful wall”?

Likely the same folks that fervently believe stable jobs at shuttered coal mines and steel factories are actually coming back (they’re not).

He made it a pillar of his campaign – the beautiful wall, that is. Which makes me wonder about his use of speech. I mean, I know I’m going to be accused of nitpicking but I’ve seen a lot of walls, none I’d describe as beautiful. Charlize Theron is beautiful. Walls are not.

Understandably the folks south of the border got testy. Surprisingly, they don’t appreciate being called rapists and drug pushers:

Even the former Mexican Grand Mufti honcho got stuck in.

“Mexico will not pay for that wall, we will pay for ladders though,” Nieto said. “Trump can do whatever he wants, he can spend as much money as he wants, but the fact is, so many of our people have friends and family in the United States. And unfortunately for these people they cannot afford a visa or citizenship or cannot wait the long delays in getting one, so ladders are the answer.”

Football hooligans couldn’t do it better. This is the best these countries have to offer, folks. God help us all!

It’s enough to drive a man to drink. I’m sorely tempted to pop down to the local liquor store for a litre of Kalashnikov Vodka – guaranteed to blow my head clean off.

Still , I’ve become accustomed to dealing with the fact the world is littered with the dullest and most useless people steering the ships. But what’s more concerning is why nobody has asked the obvious questions.

What sort of wall? Concrete? Wire fencing? If so, how much?

How will the materials get there? Take a look, there are no roads in much of the territory.

Who builds it? Mexicans?

What about housing for what will have to be a sizeable workforce? What about water, food, medical supplies?

What about tunnels under it? Smugglers, after all, have been tunneling for years where the wall already exists. Reminds me of Einstein’s definition of insanity. Why would they stop what already works?

Then there’s the little issue of this being 2,000km of wall. That’s an awful lot of wall. Wall that has to go through private land which begs the question. What about imminent domain?

What about the environment protection agency and the mating habits of the endangered red-eared slider?

Has any of this been thought about? Did voters, in their desperate desire to rid themselves of the sclerotic, nepotistic, basilisk and the establishment she represents, bother to ask themselves these questions?

The US Department of Homeland  Security estimate the wall will cost USD21.6 billion and take more than 3.5 years to build. Trump doesn’t think so.

‘It’ll get done so quickly your head will spin.’

Guess we’ll see. Anyway, considering government estimates I think it’s safe to double both of these figures – USD44 Billion and 7 years sounds about right then. That’s bigger than the GDP of Slovenia, it’s twice that of Iceland, and 3 times that of Jamaica. Personally, I’d rather just buy Jamaica, lie in the sun and collect all the rum revenues while stashing a little in the cellar, of course. But then, I’m not running the show.

I wonder: Did Trump think through the fact that the US has a pact with Mexico on shared water rights? Did he know one existed before making this part of his campaign? Annoyingly, he’s failed to brief me but I have my suspicions he didn’t.

This is the Rio Grande. Perhaps many Americans haven’t been down here or thought about this much. You gonna build a wall here? 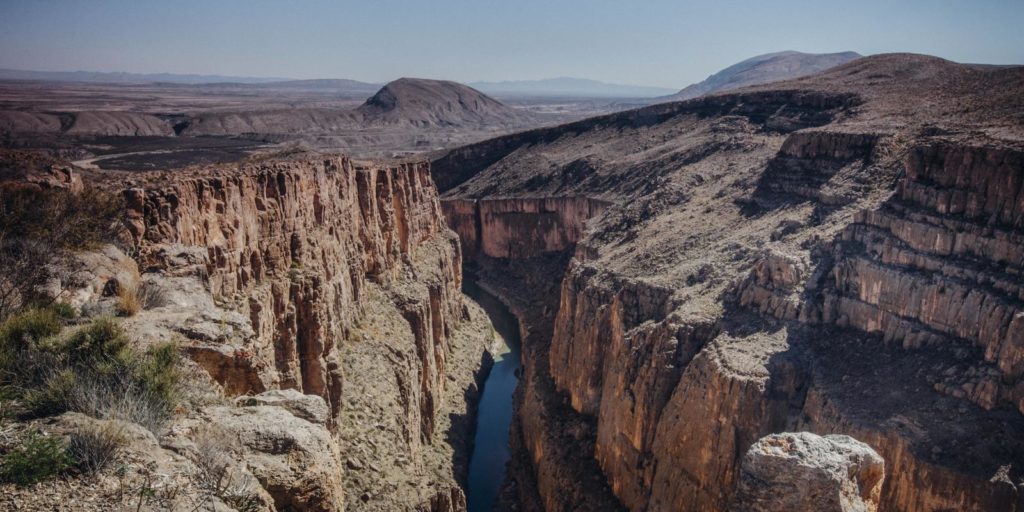 This doozy sits in the report, too:

“It also does not account for major physical barriers, like mountains, in areas where it would not be feasible to build.”

Take another look at the Rio Grande. This, folks, isn’t merely a 2x on opex estimation. Just sayin’…

So what’s up with Trump? Can he not do arithmetic? Does he simply speak like most politicians (lie)? Or does he simply shoot from the lip.

Has he looked at the fact that more Mexicans are leaving than entering the United States?

That a Mexican border wall is impractical, impossible, ludicrously expensive, and will create (rather than solve) the problems it’s purported to solve but that won’t stop Washington from doing what Washington does: stupid things.