You Cannot Go Unprepared into This

A recent conversation I had with an exasperated parent of a teenager showed me how horribly things can turn out if parents have no discipline when raising kids. If parents have been spoiling poor little “Johnny Snotbrat” for most of his life and let him get away with murder at some point he may actually do just that.

This teenager is now causing serious harm to family, acquaintances and the police. I’ve seen this happen before.

The parents – in their desire to keep the calm – let “Johnny” get away with bad behavior. This is somewhat manageable when Johnny is still small. But quite quickly Johnny grows in size and brattiness, and becomes a truly unruly brute who threatens to do serious damage. Every scuffle has always resulted in letting Johnny have his way, appeasing and keeping the calm.

Now, fast forward a few years later and Johnny is 6 ft 5, has hair on his chest and is out of control!

I’ll do my best to keep out of the way of Johnny Snotbrat but there is another event brewing and this one is going to have a vastly greater impact on us all.

Central bankers, the proud parents of the largest debt bubble this world has ever seen, have tried to spoil and appease the markets when they deserved to be disciplined. Instead of allowing the markets to correct themselves and showing discipline, central bankers flooded the world with liquidity and soaked up many problems.

In doing so they’ve created a truly wild monster both in the sovereign debt markets directly, and indirectly in the corporate debt markets as market participants seeking some sort of yield (heck, any sort of yield) have been driven down the risk curve. I detailed this recently in a post discussing the terrible misconception that many people have about a so-called global deleveraging post 2008. It never happened!

Central bankers have created this bastard of a neighbour punching, head-butting, sister shagging teenager which requires continuous feeding. But feeding him more just makes him more dangerous. The last few weeks have seen this wild creature flexing his muscles and when he truly gets out of control he’s going to start tearing people’s heads off. 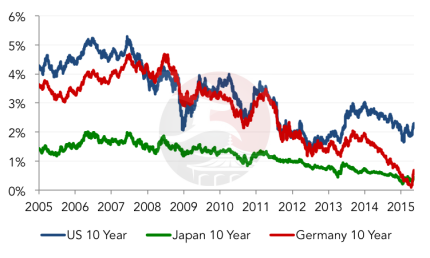 Above you’ll see the last 10 years in the respective bond markets of the US, Germany and Japan – the most important bond markets in the world today. 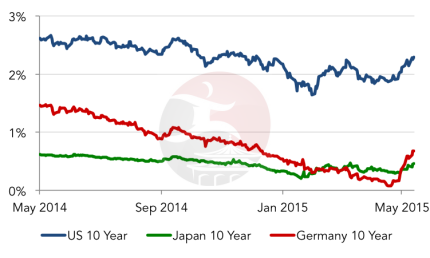 Let’s now take a look at the above chart showing the same bonds since the beginning of this year.

Bond yields are rising sharply on the long end of the curve (long duration bonds) in favour of the short end. This is a rational move. Liquidity is crashing on all the long dated maturities and as you can see yields are breaking out. It makes perfect sense to sell the long end of the yield curve given the fundamentals. What we’re witnessing is that cash flooding into the shorter duration maturities. I’m going to nab a quote which I used last week here, originally from Howard Marks of Oaktree Capital as it’s really critical to assessing risk.

It’s often a mistake to say a particular asset is either liquid or illiquid. Usually an asset isn’t “liquid” or “illiquid” by its nature. Liquidity is ephemeral: it can come and go.

Is this the beginning of the loss of faith in government paper?

We’ve discussed at length how we believe the first move to be a rush to the US dollar. We detailed this in a special US Dollar Bull Market Report on our favourite ways to trade this trend.

Since we first published the report some months back our positions have moved in our favour, though over the past few weeks there has been a pullback – something that is healthy and to be expected.

When I look at the above graphs and the fact that volatility in many of the long dated option positions we recommended has dropped again I believe the market is offering us up another fantastic opportunity to add to these positions.

The bond market is beginning to crack at the periphery (Greece and Italy) and is now showing stress on the long end of the curve.

If there is one thing that I think I’ve learned when it comes to sell offs it’s that you can be an hour early to the party but never a minute late.

There is a crisis coming and we’ll be sitting around watching each of the world’s central bankers attempting to deal with the fallout of their own creation. It promises to be entertaining:

Let’s get ready for the show but for goodness sake make sure you’re prepared for it!

“By failing to prepare, you are preparing to fail.” – Benjamin Franklin

Chris has founded and built several multi-million dollar businesses in the investment arena including overseeing the deployment of over $30m into Venture Capital opportunities and advising family offices internationally. Prior to this, Chris built a career at Invesco Asset Management, Lehman Brothers, JPMChase, & Robert Flemings.
MORE ARTICLES »
PrevPreviousPolitical Accountability from a Perspective of a Venture Capitalist
NextMongolia – Finding Its Feet AgainNext