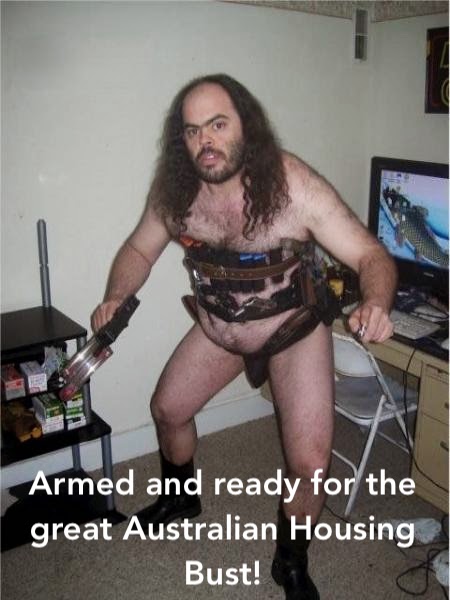 Two of of the best “tried and tested” ways to rapidly grow your wealth are to:

Both methods work, but leverage is not unlike that smoking hot girlfriend you used to have who was, let’s admit it, pretty unhinged.

Hanging about too long was always going to get you into trouble — serious, call-the-police-NOW trouble. But the allure was so strong and kept pulling you back. The decision was really tough. Not because it didn’t make sense, but because you weren’t really thinking with you brain.

That debt, like the smoking hot but unhinged girlfriend, may be about to do what it always promised to do — damage!

Australia’s household debt-to-income level has reached a spectacular new high, hitting 200% for the first time. Total household debt now stands at an eye-watering record $2.47 trillion… or nearly $100,000 for every man, woman, and child in the lucky country.

Even after debt-free households are factored in, the average Aussie household now owes twice the amount they bring in annually from wages, welfare, and other sources of income.

I get it — Joe Sixpack isn’t skilled in managing money. Hell, he’s a plumber, or a lawyer, or works in IT, or maybe he makes overpriced lattes for soccer moms. Whatever it is he does, he’s not the time to think about (or even know about) the eurodollar market or global capital flows, let alone price to income ratios.

What’s more, Joe’s got 2 and a half kids, a wife with a shoe fetish, and all these things take up a lot of his time.

What he does know is that he needs somewhere to kip at night and so do his family. So he needs a house. But he figures this is an investment (poor sod) and so he understandably makes it as BIG as he possibly can.

For many folks it’s the only time in their life they actually think about making a capital allocation to literally anything other than weekend beer and the odd family holiday to Fiji. And maybe it’s a good thing as it is the only asset that may actually leave him with something when the nurse wheels him around with tubes up his nose feeding him mushy peas.

Gasoline on the Fire

Now, the Aussies realised a long time ago that actually the government were and are completely isht at managing pensions, and unless they did something and did it quickly, they were all going to end up like all the other Western economies. Screwed and pretending they have pensions when their own balance sheets make the assertion completely laughable. And so they instituted something called “self-managed super”.

This meant that individuals would manage their own superannuation funds where they’d contribute money and towards that the government would assist via multiple ways including tax breaks and various other incentives.

The mechanics don’t matter for the purposes of this article. What matters is that over 600,000 self-managed super funds (SMSFs) are now in operation, managing over $7 billion in assets.

So, in that respect the Aussies are waaaay better off than many of their Western counterparts. But just when you thought, hooray for them, they went and doubled down on that one bet they’d already made: Australian housing.

You see, there has been an explosion in SMSF borrowing to buy into the property market amid surging house prices earlier this decade.

This is like having the crazy girlfriend, marrying her, and then — in what can only be described as a period of deranged insanity — going out and getting a couple (yes, two more) mistresses who make her look positively boring and sane.

Now, if this all sounds crazy, it’s because it is.

The sheer odds of something going wrong are right up there with patting your head and rubbing your tummy while trying to defuse a bomb with your teeth. Try it.

All (yes, all) property bubbles that have exceeded 3.5x GDP have subsequently fallen by at the smallest 58%.

All property bubbles that have exceeded 3.5x GDP have subsequently fallen by at least 58%.Click To Tweet

The reasons are as simple as Paris Hilton.

Joey with negative equity is no longer a buyer. The only way this entire squadron of buyers remain buyers is when property prices go up.

When they begin to go down, however, they completely vaporise from the market. Perhaps this is why property prices rarely fall by 15% or even 25% at the end of a spectacular boom. They go down hard.

Some other interesting numbers for you to consider.

35.4% of home loans are interest-only. This figure has already dropped from above 40% following APRA’s cap on the amount of new interest-only loans. As one professor at the University of New South Wales recently pointed out:

Interest-only loans in Australia typically have a five-year horizon and to date have often been refinanced. If this stops then repayments will soar, adding to mortgage stress, delinquencies, and eventually foreclosures,

Even if that is true, we are still left with highly indebted households who have nearly $2 of debt for every $1 of GDP, a raft of interest-only loans that will soon involve principal repayments, and stagnant wage growth.

Given that Sydney property prices have enjoyed their fifth straight month of price declines, clocking in a 3% slide over the last quarter, it’s reasonable to ask ourselves the question: Is this it?

What is really interesting to note is that all of this is happening while rates have not yet moved for mortgage holders.

I wrote extensively before about how the Aussie banks are subject to international funding markets, and as such the RBA’s power to re-inflate the market when the rates are effectively set in the eurodollar market will work with the power of an asthmatic in Bangladesh blowing at you through a straw.

And then here’s what LIBOR looks like (LIBOR being a rough measure of that interbank lending market I wrote about):

Now, I’m fully aware many of you look at squiggly lines the same way you look at that bloke with his bum cleavage showing, but there looks like a fairly significant head and shoulders formation on ALL of the major Australian banks.

These are the folks who actually own the vast majority of both residential and commercial housing stock in the country.

People mistakenly think they own their own home even when they have mortgages on the place. Silly, I know, but we, humans can imagine the darnedest things when it suits us.

And one more thing: I — along with every other investor, money manager, hedgie, banker, and of course let’s not forget home owner — don’t know for sure what comes next. Those who profess they do know are to be trusted in the same way you’d trust gas station sushi or a prostate exam from Captain Hook.

What we do know are only probabilities, how those are priced, and that is, in fact, all we need to know in order to make rational calculated asymmetric investments.

“Everyone has a plan until they get punched in the mouth.” — Mike Tyson

Chris has founded and built several multi-million dollar businesses in the investment arena including overseeing the deployment of over $30m into Venture Capital opportunities and advising family offices internationally. Prior to this, Chris built a career at Invesco Asset Management, Lehman Brothers, JPMChase, & Robert Flemings.
MORE ARTICLES »
PrevPreviousInsider Weekly: Bulls Are Freaking Out
NextInsider Weekly: It Can’t Be That Obvious, Can It?Next