Driving the back streets of Medellin a few weeks ago I found it interesting to see the various little pockets to the city. In the poor parts of town I noticed on a couple of occasions taxi drives running their vehicles on empty. I’ve seen this before in countries where there is a lack of sufficient working capital to be able to keep the tank full. Disposable income is low or non-existent…

There are, however, pockets where we found the burgeoning middle class which give credence to the statistical numbers. Here there are delightful tree lined neighborhoods, boutique art stores, restaurants, coffee shops and Land Cruisers beginning to cramp up the streets of Medellin. Colombia has indeed a rising and growing middle class, though there still exists a large disparity in wealth.

One measure used by economists to determine this ratio of rich to poor is the Gini coefficient. A Gini score of 0 would mean a perfect distribution of income and expenditure in a society and a number of 100 represents absolute inequality. This has important ramifications as often there exists a higher propensity for civil unrest as the number gets higher. Conversely the lower this number, the more equal and oftentimes stable a country. Colombia, according to the World Bank, sport a score of 53.5, though this is taken from 2012. I suspect this figure is actually lower today – it’s been falling each year since early 2000s.

The trend appears to be going in the right direction…

We’ve had our eye on Colombia for some time. One reason we haven’t jumped in earlier is that we’ve been cognizant that it’s a resource economy and when we first began taking notes we were already a decade into the resource bull market. Not optimum!

Buying into a market without assessing the risks is never a good idea. As we’ve been discussing for the last 12 months or so there is an underlying trade at work: the unwinding of the USD carry trade which saw capital pour into resources. As the resource bull rolled over, capital infusions reduced and then began to reverse. We’re of the opinion that this is still in its infancy.

The collapse of Chinese demand and the dollar bull market has already wiped something like $5 trillion of commodity driven revenues from the global system. The repercussions are only beginning to be felt. This promises to get really interesting!

As recently discussed, Chile is a great example of the risks we’re concerned about with respect to all emerging markets.

Chile is tied to copper much in the same way Colombia’s economy is tightly tied to oil. When the demand for copper is high then the Chilean economy and peso does well. Chile is a poster child country which saw a lot of people piling into at the top of the resource boom and as such the currency became overvalued even more than it would have if you were to play the currency by understanding copper.

This scared us and never really made sense as all too often what we saw when we looked was foreign buying by retail investors. Retail investors for the most part are unsophisticated, act spontaneously without critical thought and fail to do their own research. This is even more true in markets outside of their own borders. When I see foreign money coming into an economy, and while this isn’t necessarily a bad omen, when that foreign money is retail investors it’s a red flag and the risk reward is rarely good.

Yield matters, access to capital matters, and you’ll find the yields on farmland in developed countries are typically multiples of that in emerging markets. There is a reason that farmland in emerging markets often sells at a discount to developed world farmland. For example, the average dairy cow in the US has a yield 5x that of one in Mexico. Investors who fail to stop to analyse this are doomed to buy into all sorts of silly ideas and end up getting completely hosed.

With that in mind we have been looking at Colombia. What is of interest to us is real estate in Medellin, a city that is growing rapidly and has more infrastructure being built than any other in the country. For me the most important risk is that of the capital markets which translates into the availability of credit and this heavily influences the pricing of risk. Pricing of risk always translates itself into the currency and that is where our biggest risk and greatest potential lies.

Let’s Go Back First and Start with the Capital Markets

The 1970s and 80s saw some truly impressive growth in Miami. Swanky condominiums, 5 star hotels, luxury car dealerships – all of these were built on Colombian drug money. Specifically, the Medellin cartel who supplied up to 90% of the US cocaine market and 80% of the global cocaine market. The cartel was so incredibly profitable that it was bringing in more than $70M a day at its height. They were making so much money that they were spending over $2,000 per day on little rubber bands to hold the cash together, with millions of dollars which rotted and were eaten by rats.

Miami was essentially offshore financed by Colombia. The capital flows ran all the way back to the coca fields in Colombia. While drug trafficking still exists today it’s a mere fraction of its former self. Today instead Colombia relies on commodities such as oil and coffee with the energy sector accounting for 8% of GDP and 40% of revenues in the balance of payments and about 50% of total exports. What this tells me is that much of this is financed much more by the US. Credit lines today run to NYC not the coca fields of the Medellin cartel. Funding of this nature is true of most emerging markets who enjoy immature credit markets and limited domestic capital. The risk equation is substantially different.

During the resource bull private sector debt in emerging market corporates exploded. Historically it’s been unusual for such funding to be conducted in anything other than dollars. Now we have a perfect storm: collapsing commodity prices translating into a collapse in revenues for these corporates. As they pare back exposure they do so by buying back their dollar shorts. As the dollar strengthens they very quickly find themselves unable to pay their debts. It’s going to happen! We fully expect a massive blow up in emerging markets. I mentioned recently that Turkey and South Africa looked pretty precarious and this morning I woke to find that Turkey’s currency is going into free fall, violence has erupted on the streets and the government has begun arresting journalists. Does it spread?

What This Means for Colombia?

In speaking with people in Colombia I found a complacency amongst most of them. The same sort of complacency that existed in Southeast Asia even as the Asian crisis was taking hold.

When you don’t have control over your own credit markets you’re vulnerable to global capital flows and this is where Colombia is at risk. The flip side of this is that domestic credit is still nascent. Only 72.5% of Colombians have a bank account and fewer than 3% have a mortgage. During the 2008 crisis Colombia fared very well though if you recall oil hadn’t fall out of bed quite so spectacularly so the considerations right now are somewhat different.

The hedge fund manager in Manhattan, Tokyo or London doesn’t care much about whether or not Colombia, Chile, South Africa, etc. are sound fundamentally. His VAR (value at risk) models begin to blow out and he hits the sell button. This becomes a self reinforcing cycle. It’s quite beautiful to watch.

The risk here, the single biggest risk, is the currency. Get it wrong and it’s incredibly easy to be wiped out. I think we’ve got at least 2-3 more years of devaluation ahead. Oil and the Colombian peso are likely to stay low for some period of time.

At our recently concluded meet in Medellin we heard from Felipe Campos at Alianza Valores. I was really impressed with Felipe’s grounded approach and thorough research which extends beyond the narrow borders of Colombia. His presentation included this chart below which really highlights the dependence on energy that Colombia has. This will continue to be reflected in the peso. 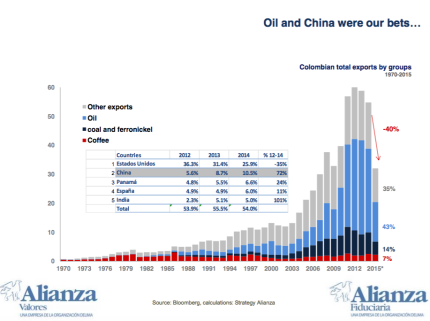 Another really fascinating chart was how closely linked the Canadian dollar is to the Colombian peso. I’d never realised how closely tied the two economies are. This also provides a means of hedging Colombian exposure in the currency markets. The COP is tough to hedge for retail guys and even when you’re hedging a $50M+ position, it’s still expensive. Hedge with the loonie? 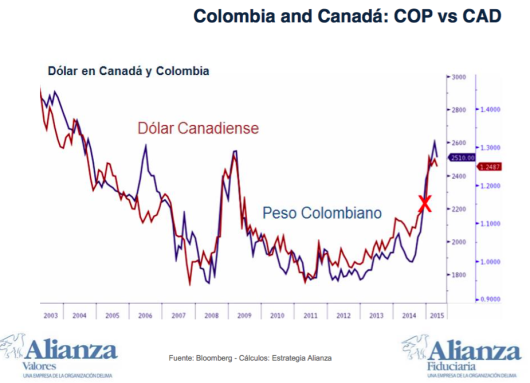 To all those Canadians who suffer under the misguided idea that Canada has a diversified economy, this above chart shows how closely tied both these economies are. The connective tissue? Oil.

As long as oil stays low, the peso remains under pressure.

This will pressure the economy and we expect to find some truly exceptional opportunities in a country that has so many good things going for it in the long term. The time to get your ducks in a line is well beforehand because when the opportunities start showing up two things happen:

We’re preparing now. If we’re wrong, we’ll know within the next couple of years and we’ll still be sitting on cash. If we’re correct, we will be buying prize assets for cents on the dollar because while we are very very long the dollar right now we’re not so naive to think that this will last forever. Like previous dollar bull markets it’ll turn around and this time it may not come back as the problems in the US financial position are unsustainable.

Chris has founded and built several multi-million dollar businesses in the investment arena including overseeing the deployment of over $30m into Venture Capital opportunities and advising family offices internationally. Prior to this, Chris built a career at Invesco Asset Management, Lehman Brothers, JPMChase, & Robert Flemings.
MORE ARTICLES »
PrevPreviousThis Trade Works Like Clockwork
NextThe Power of Distribution Manifested by Coca ColaNext

Well, as a longtime reader and “emerging market agricultural retail investor” I am compelled to reply!

Do we lose sleep knowing that – in USD terms – we are “down” 40% from where we bought several years ago? No. Why? Because we are not traders and because we bought for long term resilency and safety. The exchange of paper for forms of capital greater than just a unit of account has been successful. See the “Eight Forms of Capital”.

With liquidity via other assets and considering the time advantage we gained in executing a long term plan for the land, the TEMPORARY unrealized loss doesn’t bother us at all.

Yes, King Dollar reigns – for a while, maybe longer, but in the end we all know the current monetary system will be reset and owners of productive real assets in the “safer” jurisdictions will likely emerge with wealth intact. I encourage everyone reading to convert USD paper to those types of assets as quickly as possible and view the USD strength as a fleeting blessing. It is better to be months or years early than one day late.Do your homework though! Especially on the people……