Personal security is going to be a huge growth industry and here’s why.

Economists and people with pointy shoes in shiny office buildings tell us that the vote for Brexit was an economic decision. They may be right for a minority but they’re wrong on the majority.

Nope, the amount of people in any given populace who understand the financial system, interconnectivity of global trade, trade agreements, currency hedges, and the myriad other aspects entailing said “economic decision” are about the same percentage as those who can touch their toes without something popping. Many couldn’t tell you how the chicken breasts at Tesco make it to the shelf, and they sure as heck don’t understand the implications of Brexit.

To the vast majority of Brits Brexit was based on far simpler to understand issues. A middle class who increasingly feel less “middle” and in fact more “lower” may not have known what they would be getting by voting for Brexit. But they did know that what they had wasn’t working for them.

A topic which has been given very little thought by academia is that of security. It’s right up there in Maslow’s hierarchy of needs, well ahead of cling wrapped chicken breasts on the supermarket shelf and waaay ahead of figuring out global trade or derivatives tied to currency swaps affected by Brexit or any of the other good stuff.

High on the average voting Brit’s mind was another topic which the media has repeatedly downplayed: safety and security.

It’s one of the key problems the political class don’t seem to understand. At the very beating heart of the contractual relationship with the nation state is the agreement that citizens will be kept safe from invading armies and domestic threats. When Europe lost control of its borders it broke this contract with its citizens.

A trend is now well underway. It’s not a particularly nice one but it can pay off handsomely.

I had the good fortune of growing up in white-led South Africa. I was poor but at least the crime was getting worse and the currency was collapsing.

I remember watching consumer demand change drastically over a few short years. Lawns leading up to neighbourhood houses could no longer be seen behind 6 foot high walls covered by razor wire or electric fences. Alarms, panic buttons, patrolling private neighbourhood security, and myriad other security devices became mandatory. You name it – South Africans signed up for it.

When in South Africa you should never be fooled by the pretty young blonde in a mini skirt because in that handbag of hers, sitting behind the mace, is a small pistol. And she’s got a panic button in there too. When pushed it will have a half dozen ex-military private security guys arriving on the scene, armed more heavily than the Rock and Rambo put together and with vastly more experience too. It very quickly became “normal”.

A high school mate’s father bought into a security franchise and only years later did I understand why they managed to go on skiing trips to Europe each year, had holiday homes across the country, and lived in a house that had separate “wings”. Business was, and in fact still is, very profitable.

I think the same trend is in force and will accelerate across Europe in particular but quite probably the US as well. Private security is going to boom.

Terrorism does just that: it creates terror. Statistically speaking, the odds are low for you to be affected by a terrorist event. What they do, of course, is create massive anxiety because they’re publicised so well.

As I said in “7 Steps To The Easiest Short In Recent History”:

“The simple fact is that Western foreign policy cultivates terrorists faster than it kills them.”

Crime, on the other hand, is pervasive and the message spreads virally. Joey at work is mugged and everyone who knows him learns about it. They realise it could have been them or worse – a loved one – and, when offered a solution, they will take it. It is after all, often a binary option much like household insurance. Sure, you don’t expect to have your house burn down but if it does it can be catastrophic without insurance. Well, the lives of your family are vastly more important than the house.

Both terrorism and crime contribute towards a booming security services industry because both put the average man on the street on edge.

Won’t the Government Clamp Down and Eliminate the Problem?

I remember working in the city of London at a firm I’ll just call P.J. Gorman (to protect the innocent) where security, especially after 9/11, was so tight that security personnel never let anyone in. Ever. There were two checkpoints and without computerised photo ID you weren’t getting through in a hurry.

To get around all this, when I inevitably left my computerised photo ID at the gym or in my girlfriend’s underwear I’d simply enter the building through the post room. I suspect many other corporate security setups are much the same.

Airports and public spaces are worse because they’re guarded by the government.

I remember asking a policeman in London years ago about an electrified fencing that was surrounding an event Tony Blair was attending. The voltage on the thing was so low that I could tap it with my finger and receive a small zap. If I’d had half a dozen pints in me I doubt I’d have felt much at all. Sure, it may have kept out a dreadlocked “greeny” but, pray tell, what good that’s going to do against someone who’s spent the past 10 years living in a cave, fending off cluster bombs and building visions of virgins in his head.

The Brits and increasingly the Europeans may well end up decorating all their most beautiful buildings with anti-aircraft guns, concrete barriers, and civil servants dressed like Rambo, but one things seems pretty certain to me. All this is to say that there will be more terrorist attacks, and everyday crime will increase.

Below are some stats from the UK Government themselves. Now, if this was your stock portfolio you’d be laughing. You’d certainly have beaten the benchmarks. Unfortunately it’s rape and violent crime that are going up like internet stocks in the 90’s. 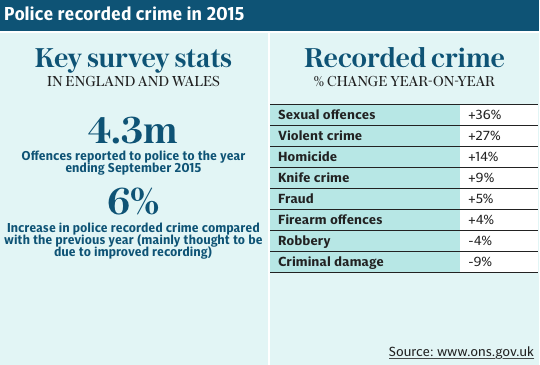 The threat – real or perceived – by a migrant invasion which is closely tied to rising crime was at the heart of the Brexit vote.

Pasty the Brits may be, but not stupid. Putting two and two together, they realise their neighbourhoods are no longer safe. An article in the Telegraph states:

“The pattern of immigration is part of a cocktail of factors that has led to the increase in the murder figures,” said David Wilson, professor of criminology at Birmingham City University.

It’s not politically correct to blame migrants or even immigrants who’ve entered legally but when the average Brit travels to South East London, realises that nobody speaks English, and he feels the social mood change – as you do when going into any ghetto – he doesn’t like it and would rather not have more of Kandahar in his backyard.

When the economy isn’t providing him the life he expected he looks for someone to blame. Those ethnically different will come first. Every time. It doesn’t matter if “they are taking the jobs” or not. What matters is how it is viewed and that is one major reason that Brexit took place.

The same zeitgeist is pervasive across Europe which is why the Euro is on its last legs. When Italy (or France) decides to leave the EU then the Euro itself is finished.

In the meantime, I look for the knock on effects of these shifting trends.

As the Economist reports: work traditionally done by law enforcement is being contracted out. The article goes on to say that the number of police and licensed guards in Europe is now about the same, and facilities such as airports, power plants, and hospitals are protected by private security.

” Part of the boom has come from the massive influx of refugees from Africa and the Middle East, as well as fears of terrorism. “Long-term growth of private firms looks likely for a third reason: lower public spending in Europe combined with growing anxiety about security in general. James Kelly, who heads BSIA, the main association for 450 big private-security firms in Britain, says austerity has lifted demand for their services. He says that G4S, for example, conducts ‘street to suite’ operations: its staff collect suspects arrested by the police, take them to custody, and process paperwork. He predicts that private contractors, operating under the police code, will conduct arrests before too long,”

It will begin at first with husbands, fathers and boyfriends buying their wives, daughters, and girlfriends pepper spray but will move into private security firms who will provide neighbourhood watch services.

Personally I’m interested in companies using smart technology to tackle the problems. Think drones, data aggregation, and profiling for individuals. Like it or not, this is going to be a growth industry as the economic cycle turns down, nationalism rises, protectionism rises, all of which are near guaranteeing recession and one of the knock on effects will be a growth in this industry.

To summarise: the forces affecting this trend are:

Right now we have all of these in play.

“The ache for home lives in all of us. The safe place where we can go as we are and not be questioned.” — Maya Angelou

Chris has founded and built several multi-million dollar businesses in the investment arena including overseeing the deployment of over $30m into Venture Capital opportunities and advising family offices internationally. Prior to this, Chris built a career at Invesco Asset Management, Lehman Brothers, JPMChase, & Robert Flemings.
MORE ARTICLES »
PrevPreviousWorld Out Of Whack: When Bonds Trade Like THIS Asset?
NextPart Deux – Chris MacIntosh Talks With Worth Wray (Global Macro Strategist)Next