Can Someone Find Me A Borrow For This Crazy Investment, Please?

Do you remember when you were growing up and all your friends were allowed Atari game consoles but you weren’t?

Well, I do and the things seemed as foreign to me as Venus. Mostly because the little time I managed to spend on the gaming consoles when my friends weren’t hogging them I found it all a bit silly. I never “got” computer games, and to this day still have poor comprehension of things like Angry Birds.

I suspect that many people around the world view Bitcoin in the same way as I view Angry Birds: with mild amusement and a general lack of understanding as to what the hell all the fuss is about.

I was thinking of this since a buddy of mine recently started taking notice of Bitcoin. Here’s a hedge fund manager who has been known to investigate some of the more out of the box investment opportunities around and Bitcoin is on his radar.

He figured out pretty quickly how to buy, store, and trade the currency. It’s extremely simple and certainly much easier than opening a typical brokerage account. But I wondered if the broader market saw it the same way?

What about Joe Sixpack who’s seen the Bitcoin checkout option on Amazon and thinks it’s another version of PayPal? Or the desk jockey who’s heard about it from his wayward teenage son and thinks it’s the domain of terrorists and crack dealers? What would it take to provide legitimacy to Bitcoin or any cryptocurrency in the eyes of the masses?

To answer my curiosity I googled it and found an article where some know-all was saying that Bitcoin isn’t a “real” currency because it’s not issued by an authority. This may strike a chord but I think the last time someone was so wrong he was standing in front of a tank in Tiananmen Square.

What gives Bitcoin value is largely the very fact that its NOT issued by any such “authority”.

But being an ardent student of history and lover of psychology I understand that there’s a fair few (the majority actually) among us who find comfort in a man in a uniform with a fluttering flag behind him. If it can’t be ISSUED by an authority, then would some such authority ostensibly legitimising it perhaps do the trick? The local government of a Swiss canton perhaps?

Or what about a listed investment vehicle that you can buy through your Roth?

Surely the folks at the SEC who are in charge of what gets to be listed and accessible to mainstream investors wouldn’t allow crack peddling currencies onto their exchange. So if the SEC OKs it then that is authority we can trust, right?

And this is where the intersection between what is available on an authorised exchange and what can be freely bought in the open market collides. And in this collision space lies a simply huge arbitrage opportunity.

A quick search on the Internet reveals an interesting animal: the Bitcoin Investment Trust (BIT). Only qualified accredited investors can buy BIT but everyday Joe can buy it as GBTC on the OTC market without restrictions.

Presumably, since it trades on a regulated and known platform, investors sense it is somehow more stable, more authorised, and more safe. It allows institutions and retail investors to have a proxy ownership in Bitcoin. I see nothing wrong with any of these things.

Some people like buying gold ETFs as a proxy for gold, others like the shiny metal in their grubby hands, and yet others prefer futures contracts. It all depends on what you’re looking to achieve so why not Bitcoin?

When I first looked at Bitcoin Investment Trust I had to do a double take. The price didn’t reflect the price of Bitcoin so I double checked the mandate. But no, they simply invest in Bitcoin. It’s specifically meant to track the price of Bitcoin. The thing is, it trades at over a 60% premium! 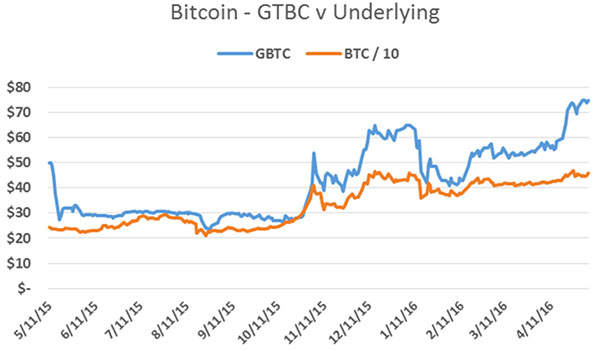 In any other market on this planet, were we to have an asset priced at one level in one place and an entirely different price some other place, the price discrepancy wouldn’t last very long. Traders would buy the asset where it is cheaper while simultaneously selling the asset where it is more expensive and pocketing the difference. Something also known as an arbitrage.

Arbitrage opportunities exist in public markets all the time but the discrepancies are typically extremely small and even more so with higher liquidity. It’s also pretty rare for them to last for any real length of time. Years ago I worked with traders whose sole focus was on arbitrage trading but today algorithmic trading trading has almost eliminated these opportunities and jobs.

Bitcoin’s market cap is now over $7 billion so it can no longer be considered “illiquid”. To have such a huge margin of price difference would be like having Icahn Enterprises (IEP) trading at 54 bucks on the NASDAQ while simultaneously trading for 86 bucks on another exchange, say the LSE. We’d all make a fortune with such an opportunity.

I therefore humbly ask any of the Joe Sixpacks out there who’ve invested in this Bitcoin ETF to provide me a borrow as shorting it is not currently available.

Take another look at the above chart and tell me you, too, wouldn’t want to arbitrage this anomaly?

Chris has founded and built several multi-million dollar businesses in the investment arena including overseeing the deployment of over $30m into Venture Capital opportunities and advising family offices internationally. Prior to this, Chris built a career at Invesco Asset Management, Lehman Brothers, JPMChase, & Robert Flemings.
MORE ARTICLES »
PrevPreviousOnly Two Options For The Saudi Sheikhs
NextHow To Be A Smarter InvestorNext