A few years ago, when living in Phuket, Thailand, a group of Saudis stayed for a week’s holiday in a neighboring villa.

Outside of the religious and social confines of the land of black gold and endless sand, this group made a bunch of spoiled 5-year olds left to run amok in a candy shop without adult supervision look positively angelic.

They were very visible, with an entourage of young Thai “ladies” and a fleet of Land Cruisers to haul them about. On one occasion, after my son witnessed one of the guys buying a beer and throwing a US$100 bill at the waiter, telling him to keep the change, he asked me how come they had so much money to waste.

I explained that Saudi Arabia has two things in abundance: sand and oil. And though the world doesn’t need sand as much as it does oil, they have grown very wealthy selling the oil to the rest of the world.

Depending on whose numbers you take, somewhere between 75% and 85% of Saudi Arabia’s revenues come from oil exports, and fully 90% of revenues come from oil and gas. Clearly the Kingdom is dependent on oil revenues in the same way that an infant is dependent on its mother’s milk. And unless you’ve been living under a rock for the last few years, you’ll have noticed that the price of oil has collapsed.

Now in a “normal” market the reduced revenues would manifest in a weaker local currency as demand for Riyals declines.

But governments and central bankers don’t believe in “normal” markets and so the Saudi riyal has been pegged at 3.75 to the US dollar since 1986.

It’s not hard to see a situation where Saudi Arabia may very well be forced to de-peg the currency to curb the fall in the country’s FX reserves should low oil prices persist.

Let’s look at some of the potential catalysts for this.

Could Yellen Kill The Peg?

While the Sheiks contemplate how to deal with their predicament from diamond encrusted cars and golden toilets, across the pond we find that monetary policy in the US has been tightening albeit modestly. What’s important to understand is that in order for Saudi Arabia to maintain its currency peg it needs to follow FED monetary policy.

By following Yellen the Saudis land up sacrificing growth, and by diverging they sacrifice FX reserves in order to maintain the peg. Clearly neither are attractive propositions. According to the Saudi Arabian Monetary Agency (SAMA), for every 100 basis point increase in the Saudi Interbank Offered Rate (SIBOR) this leads to a 90 basis point decline in GDP in the subsequent quarter, and a further 95 basis points in the following quarter.

Falling GDP in a country where over 60% of the population are under 30 brings about its own set of problems. Political instability in the Kingdom has been rising and the royal family is increasingly fighting for survival. After all, they had the experience of watching the Arab Spring unfold on their flat screens.

If, on the other hand, they opt not to follow the stumpy lady, the gap between interest rates in the US and Saudi Arabia will be quickly exploited by people like me as arbitrage opportunities open up.

So this is what we’re all looking at right now: SAMA will have to buy riyals in the open market by selling from its hoard of dollar reserves. Any rise in interest rates in the US will mean SAMA will have to further deplete reserves.

As I have mentioned before, all pegs eventually break. The question is one of timing.

How long do the Sheiks have under current oil prices?

The falling oil price since mid-2014, has significantly reduced Saudi Arabian revenues. So much so that the scorecard for 2015 showed a deficit of $98bn, and SAMA is estimating a further $87bn deficit this year.

The Saudi government have been funding this deficit by drawing down on forex reserves, spending $132bn in the year to January of this year. With current prices and current reserves they can easily last another 4 years.

Some things I’m thinking about:

This could certainly get interesting and traders have begun speculating on a de-pegging from the dollar. 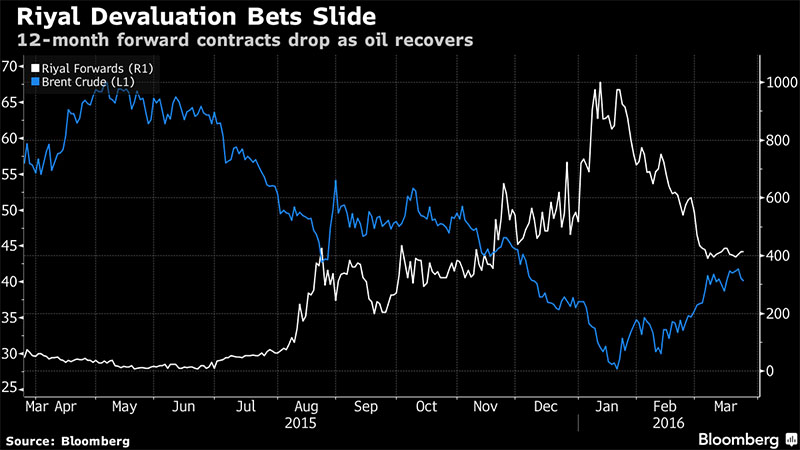 Should low oil prices persist for the next 3 to 4 years, Saudi Arabia will be forced to decide whether it prefers to either cut the production or loosen the currency peg.

I could be wrong but I feel like it’s too early to play this trade and the costs of entry are not astoundingly cheap. Saudi Arabia has almost no debt and can easily access the credit markets. With debt to GDP of just 2% they have a lot of room to move. Coupled with the upcoming partial listing of Aramco their ability to tap international markets for capital is certainly a factor I’m not sure all currency speculators are considering.

What is worth watching are neighbour states. While Kuwait, Qatar, and the UAE all have dollar pegs, they too have vast central bank reserves and sovereign wealth funds. But what looks pretty precarious to me are Oman and Bahrain who could run out of reserves in less than three years. Both these countries have resorted to issuing debt to extend the longevity of their reserves but issuing dollar denominated debt which is essentially asset underwritten by the price of oil in an environment of persistently low oil prices certainly looks like a precarious bet to be making.

Investors looking for asymmetry in markets will do well paying attention to the currency markets, and existing dollar pegged currencies in particular. As I mentioned before… all pegs break, and the returns that can be made in such situations are of the life changing variety.

“If Saudi Arabia was without the cloak of American protection, I don’t think it would be around.” – Donald Trump