A Wild Day From Start to Finish!

That’s the only way to describe it.

If today’s missive is a little shaky or disjointed, it’s because I’ve been running on adrenalin for 15 hours flat, and I’m feeling a little exhausted.

We are in the midst of a period of financial history that will go down in the history books.

I’ve spent the last 15+ hours trading and messaging with a good friend who’s one of the best traders I know. I’m now taking a break to pen this before getting back to European open. I don’t expect to sleep much tonight.

Traders love volatility and what the markets delivered today has been nothing short of freaking AWESOME.

The volatility has been absolutely stunning and the trading opportunities have been popping up like moles in a super charged game of whacka-mole. Except that the moles can bite your head off if you’re not to careful.

As a teenager only just getting interested in financial markets, I’d dreamt of events such as this.

It’s somewhat surreal as we read the stories, search through the history, analyse the charts, the numbers, the ratios, and myriad other pieces of the puzzle; and so to be applying skills as this unfolds in real time is truly mind blowing.

But first let me give you a taste of the fun experienced:

As the day progressed, in between watching positions I snapped some of the flow on Twitter.

Certainly no run of the mill day… 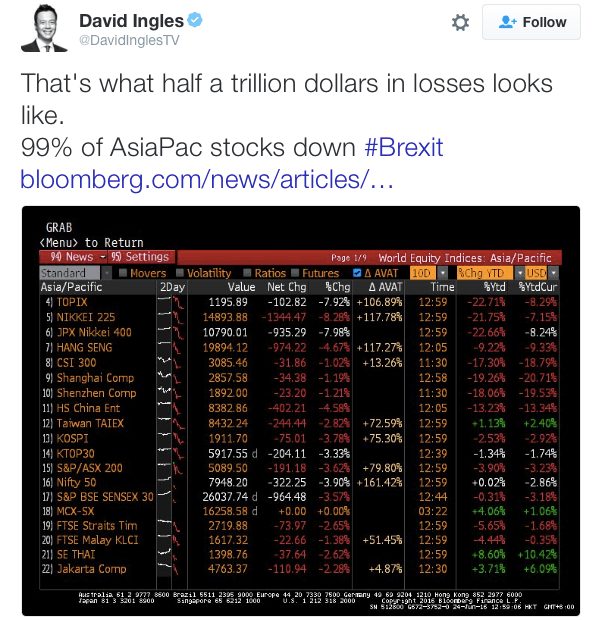 And as I write this, Asia is closing while Europe opens. It’s going to be a long night. 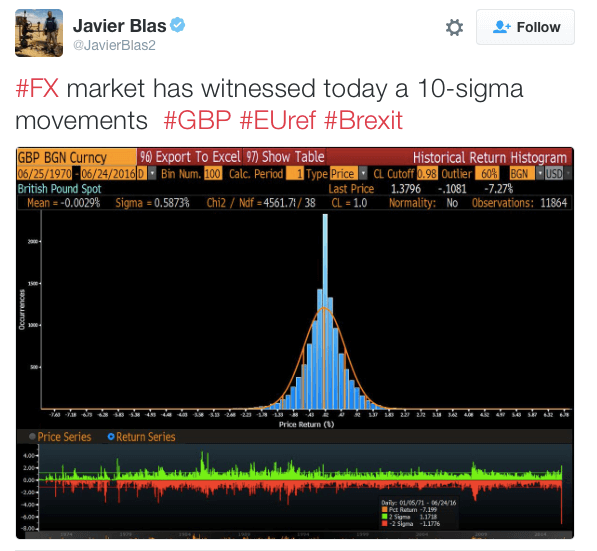 Recently I gave up something which had been very special to me. It was my baby for a long time and today I know with certainty that it was the right decision.

The macro landscape is shifting underneath as at warp speed, and in today’s world capital shifts in minutes. With the Blockchain it shifts in seconds.

The politicians and central bankers are increasingly behind the curve, scrambling to catch up and each and every turn sees them exacerbating and compounding problems.

Brexit should stand as a wake up call not only to central bankers but to the political class globally.

As I mentioned in this week’s “World Out of Whack”:

The vote to stay or leave the EU is as much a vote for or a rejection of the establishment than any other European or British referendum I can think of.

You know when you tell your wife that you forgot to put dinner on because you were too busy doing something else and she completely loses the plot?

Well, from my experience – and I’m quite experienced – it often has more to do with the fact that I’ve annoyed her with something else as well, and it’s not actually got all that much to do with dinner.

Sometimes it’s the market reaction to an event rather than the event itself which matters more. This is what we’re seeing now.

This isn’t about Britain as much as it is about a global anti establishment uprising. The British people opting out of the EU is a profound statement to that effect.

I think it’s fair to say that the extent to which the markets have been reacting indicates just how incredibly fragile they really are.

As I mentioned on Wednesday:

As traders and investors it’s of no consequence what we may wish to happen. As incredibly important, wonderful, talented, intelligent, good looking, and well deserving readers of Capitalist Exploits are, the market doesn’t actually give a toss about us. Depressing, I know. But what actually takes place and how that affects asset prices is what matters.

The illiquidity that will now wash over other asset classes promises to be extreme.

Some questions that I think are worth asking yourself:

Capital is shifting right now at lighting speed and fortunes are being made and lost. Today was an awesome day for my buddy and I but I’m always aware to manage risks.

If markets continue in a fashion that is even a fraction of that which I’m watching on my screens now, then it’s a foregone conclusion to me that we’ll get a stimulus package to meet all stimulus packages. They’ll probably even call it something unique by picking letters out of a Scrabble bag but it’s coming regardless.

This will set up some fantastic trading opportunities and may well be the last “hurrah” that pushes the debt burden of sovereigns to breaking point.

Books will be written about this period of time. Count yourself lucky to be alive witnessing it in real time.

“With markets having wrongly bet on a Remain win in the past few days, and with patchy liquidity sure to amplify price movements, there will be severe pain for levered long investors and, potentially, opportunities for cash rich ones.

Artificially-elevated financial markets were at the risk of either a policy disruption or a market accident. Brexit could well turn these two risks into reality.” – Mohamed El-Erian, adviser to Allianz and former co-chief executive of bond manager Pimco

Chris has founded and built several multi-million dollar businesses in the investment arena including overseeing the deployment of over $30m into Venture Capital opportunities and advising family offices internationally. Prior to this, Chris built a career at Invesco Asset Management, Lehman Brothers, JPMChase, & Robert Flemings.
MORE ARTICLES »
PrevPreviousWorld Out Of Whack! Brexit…Coming
NextThe Rise Of An Investing Legend: Karl Mikael SydingNext