Opportunity Amongst The Entrails Of European Banks

In a misguided and desperate attempt to fight the headwinds of deflation (a byproduct of unsustainable debt which the market has been trying to unwind for the past decade), central bankers have manipulated markets with a range of tools. This ranges from a lot of preposterous jawboning to quantitative easing and slashing interest rates all the way down to levels never experienced before.

The markets’ belief in central bankers abilities to keep this particular boat afloat has never been higher. We can see this in the futures market where the market is pricing in low (and even negative) interest rates well into the sunset. If you doubt me go take a look at Euribor rates where the market still expects 3-month euro rates to be 0% some 5 years from now. One would only do this if one thought that default risk was non-existent.

As if that is not enough, central bankers themselves actually are beginning to believe their own rhetoric:

“But we are magic people. Each time we take something and give to the markets – a rabbit out of the hat.” – Vitas Vasiliauskas, ECB Governing Council member

We are clearly dealing with delusional people, and market participants are increasingly making decisions based on the absurdities uttered by these people.

Expecting the very same people who have caused so many of the problems we face today to be able to both identify and then solve those problems is like expecting my dog to be able to solve a quantum mechanics problem, cook my dinner, and restrain himself from chasing a cat. It’s just not going to happen.

While we can’t stop or change what these monetary masters of the universe have done (and will likely continue to do), we can look to profit from the global mispricing of assets – a byproduct of their actions.

The economic and political problems in Europe have seen investors turn on European banking stocks in the same way an ill treated pit bull can turn on its owner, mauling him to death.

Ask one hundred people where things are headed with European banks and you’ll likely receive an overwhelming majority telling you they’re in trouble and to stay away.

This is one of the most fearful markets in the world today.

Quite simply: European banks today are universally feared and hated. I have no doubt that some will disappear over the course of the next decade, if not sooner. But certainly much of the pessimism is baked into the proverbial cake.

Markets are forward-looking and the market is pricing in serious problems for European banks. But here’s the deal:

Things don’t actually need to get better. The worst, already priced into the market, just need NOT eventuate.

This market is priced for the absolute worst. And while the worst may yet happen, it’s unlikely to happen to all the players.

This shouldn’t come as a surprise. Any investor who was alive during the last decade harbours a deep-seated hatred of financial institutions. First, they came near bringing down the world economy in 2008 and then they lobbied the political class to ensure they could keep the holiday home on the French Riviera. And it all worked.

Having spent the beginning of my career in the entrails of investment banks I sympathise. I can name a few people who should have been drowned at birth who inhabit the hallowed walls of these “fine” institutions.

All that aside, when a market is so unloved I’m instinctively curious. And so into the carnage we go hunting… And while parsing the entrails of financial reports we found something very interesting and we think it’s worth sharing.

Anywhere you go in the world I can pretty much guarantee you that when meeting a Dutchman you’re likely to find them amongst the friendliest, most open, and genuine people you’ll meet. Maybe I’ve just been lucky but I’ve just found another reason to love them.

The opportunity we are investing in is ING, a Dutch banking group (ING on the NYSE or INGVF in Amsterdam).

ING, like its unusual headquarters, stands out for a number of reasons.

One of the reasons is that ING trades at 80% of tangible book value, sports a price to earnings of 9.8x, and has just increased their dividend to 7%.

This is easily one of the more compelling opportunities in the market today. It’s no surprise that it is hidden in a sector as bleak and miserable looking as European banking.

Digging deeper, we see that their capital levels are one of the highest in the industry and rising. They are also sporting strong loan volume growth and are implementing a deposit repricing rollout to further strengthen their profit margins.

To understand why ING has managed to significantly increase profitability and growing its customer base while its competitors have languished, we need to look at their cost structure. It is here that we find that, unlike its more traditional peers such as Deutsche Bank and Commerzbank, ING operates without branches.

Preferring to leverage technology, they have managed to operate and compete with a far lower cost structure and this has allowed them to achieve a 30% return on their equity.

Take a look at this slide from their 2016 investor presentation: 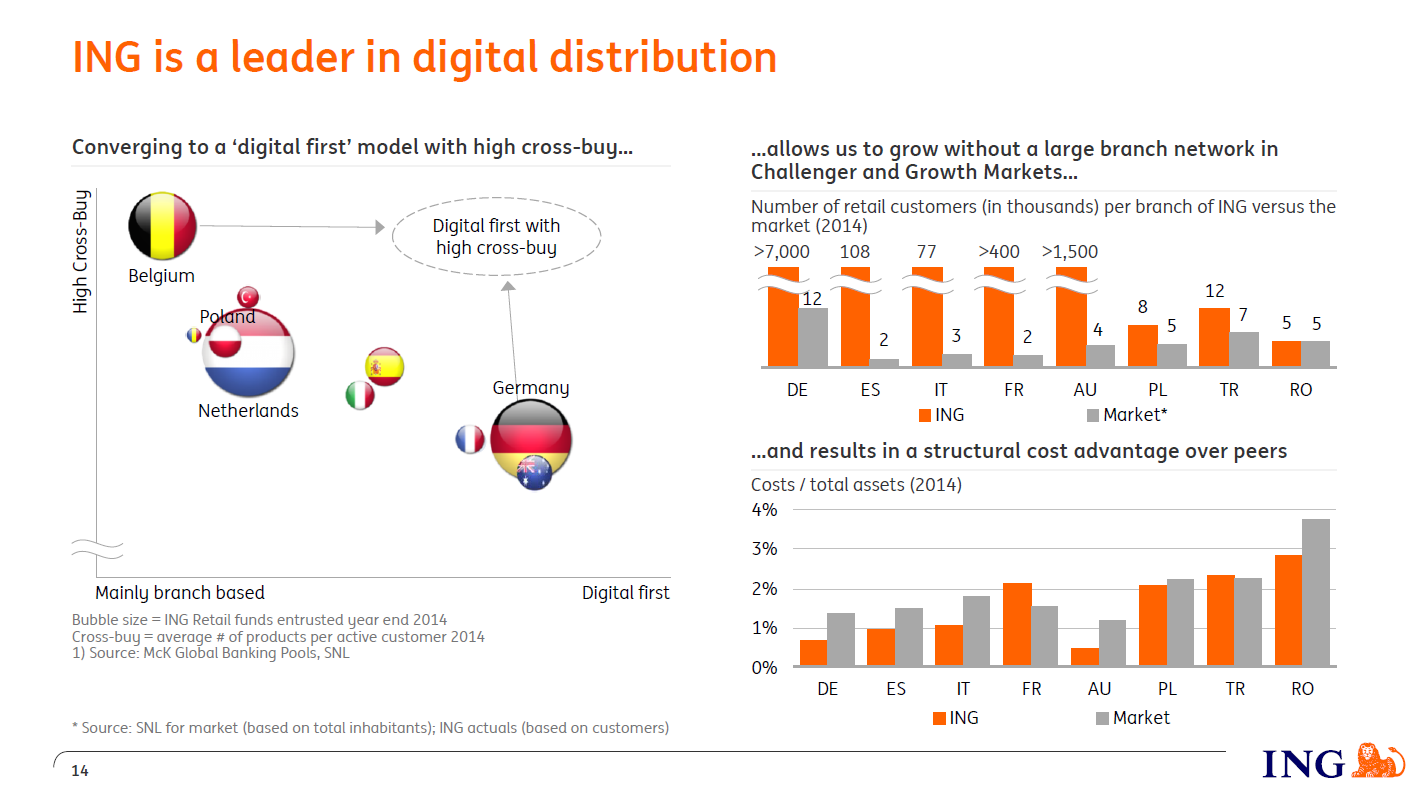 ING has been tarred with the brush of recent well publicised negative market events such as exposure to the energy sector and Russia. It’s common knowledge that European banks have been financiers of Russian business and so the subsequent collapse in the ruble, together with negative impact of the energy sector, has severely impacted their balance sheets.

ING’s Russian exposure is approximately 1% of their loan book so we think investors’ fears are way overdone with respect to ING.

The other well publicised market event has been the Ukraine. But ING’s Ukraine exposure amounts to 0.2% of their loan book.

And given the fact that ING’s NPL coverage ratio as of last quarter was 66% we think once again that the market is mispricing ING. Certainly two of the most publicised negative market events have brought negative views of European banks regardless of who is actually exposed.

Considering all of the above, it is not hard to see that throwing the baby out with the bathwater has provided the opportunity to buy a well run company at a nice discount.

(As a side note, I’d suggest buying ING in Amsterdam for greater liquidity.)

And while buying ING outright makes a lot of sense, this is not how we’re personally trading this.

Brad, the head trader at our Asymmetric Opportunities Fund, has prepared a detailed writeup on how exactly we’re playing this: a way to place a small amount of capital at risk and potentially achieve a 1,150% payoff.

As a subscriber of Capitalist Exploits you’ll automatically receive this tomorrow (and if not, I encourage you to sign up here). Consider it a window into how a successful hedge fund trader approaches such opportunities.

Have a good weekend!

“People who confuse what they wish were true with what is really true create distorted pictures of reality that make it impossible for them to make the best choices.” – Ray Dalio, founder Bridgewater Associates

Chris has founded and built several multi-million dollar businesses in the investment arena including overseeing the deployment of over $30m into Venture Capital opportunities and advising family offices internationally. Prior to this, Chris built a career at Invesco Asset Management, Lehman Brothers, JPMChase, & Robert Flemings.
MORE ARTICLES »
PrevPreviousHow To Be A Smarter Investor
NextThe Only Constant Is ChangeNext