It’s Crazy What This Commodity is Being Sold For!

Internally we have a running joke here. We talk of the “Yeti” deal. Like the Yeti, everyone has heard about the deal but few have seen it, and the longer this persists the greater the doubt that the “Yeti” actually exists.

The “Yeti deal” is a project that I began work on with a good friend and adviser. Our syndicate members have heard a lot about the deal, but as I said, for a number of reasons it’s not come to the stage of being investable… yet. The deal involves coconuts… coconut water to be precise.

We began due diligence nearly a year ago on a particular company which shall remain anonymous, landed up restructuring their existing corporate entity, shareholders, company domicile, rebuilt their financials and a host of other things required, in order to both fully understand the deal, as well as ensure it was suitable for both ourselves and our syndicate’s capital. Suffice it to say, it has been a long, though very interesting journey.

During the course of this due diligence process we’ve learned a heck of a lot about coconuts, and our strategy to participate in this exciting space has changed materially as a result.

Coconuts are truly fascinating for a number of reasons, not least of which is the ability to price taxis in most any Southeast Asian country by asking the taxi driver what price a coconut sells for in the wet markets. There is a pretty consistent ratio between the price of a taxi trip in downtown Bangkok and that of a coconut in a Bangkok wet market. The same is true of the price of a taxi in Colombo, and what a coconut sells for in a Colombo market. Ditto Jakarta and Manila… all countries which produce a lot of coconuts.

Aside from double checking if your taxi driver is screwing you by using the “coconut barometer”, let’s look at the products and uses for coconuts as a precursor to the story:

We’ve long been proponents of investing in agriculture and have mentioned it many times in posts on the site and in our crash course, which provides a bit of an overview and insight into our investment thesis.

In any event, the numbers are hard to ignore, so when I think about coconuts the one thing that stands out is that with a coconut palm you’re literally growing water, food, and other resources together. In a world where water is such a scarce and valuable commodity this is particularly intriguing. Investing in water is problematic, if only because parasites… ughh, I mean governments, can and will commandeer it in times of crisis. I struggle to see them doing that with coconut plantations, though nothing would surprise me anymore.

Coconuts enjoy a hot, humid climate and grow in the tropics and sub tropics, which often means that many of the countries where coconuts are grown, water in fact demands a premium… clean drinking water, that is. In most of Southeast Asia, central America, South America and the Caribbean you can’t drink the water from the tap without getting violently ill. When you’re drinking the water from a coconut you never have to worry about whether its going to make you sick or not, as the tree strips all impurities out.

In fact, further to the above point, while its not necessarily a marketable differentiator, we’ve spoken with agriculture professionals, including a professor of agriculture, who claim that there exists no discernible difference between organic coconut water and non-organic. This is because the tree is so efficient in extracting impurities that the water found in the nut is identical. The soil which the palm trees are grown in shows a difference between organic and non-organic, but not the coconut water found in the nut.

Let’s take a look at some of the numbers involved in getting you that lovely, refreshing bottle of coconut water, fresh off the shelf of your favourite supermarket…

You’ll get approximately 22 trees per rai (there are 2.5 rai to an acre). A good tree will produce 120-150 nuts a year so let’s be super conservative and work on 100 nuts a year. Each nut holds roughly 300ml. (bearing in mind the younger the nut the sweeter, and larger nuts hold more but are more sour in comparison). So each rai will produce 30,000ml x 22 or 660 litres a year. Bear in mind it’ll take about 3-4 years for a tree to reach full capacity. They grow very quickly.

Now consider that Harmless Harvest, a US based company who source their coconut water from Thailand, sell their coconut water for between US$6.49 and US$7.99 per 500ml bottle at Whole Foods in the US. Meanwhile, one nut in the Bangkok wet markets goes for between 8 and 20 baht (depending on time of year). At roughly 30 baht to the USD this means 300ml sells for between US$0.26c and US$0.66c. Of course there is bottling, logistics and HPP expense involved, so it’s not all profit, but the rough cost is under US$1. Nice, huh?

With demand continuing to grow as the overall coconut water market expands, and with US cities continuing to experience drinking water price increases due to droughts (that threaten cities like Las Vegas), it’s not difficult to imagine moving 50,000 or even 100,000 bottles of coconut water each week.

Let’s add it all up. Assuming 660 litres per rai, and an end consumer price of US$13 per litre ($6.49/ 500ml bottle) we’re looking at $8,580 gross from just 22 trees on one rai of land. I won’t delve into the price/rai of agricultural land in Thailand, simply because it varies greatly depending on location, quality, etc. I will say though that if Thai farmers were receiving anywhere near this for their coconut water, let alone all the other products from a coconut, they would all be driving a Maserati and not a Toyota.

The money comes from commoditizing the product(s) and moving from grove to grocer. The biggest spread isn’t growing the underlying nuts, but controlling the nuts from co-op onward (in our opinion). There is sizable profit in coconuts – but the farmers don’t make it.

Attentive readers will understand quickly what we’re investing in, and why we’ve taken so much time to delve into this market and understand it from the inside out.

Looking beyond the coconut water, let’s take a look at activated carbon.

Reference the prices of activated charcoal being sold on Alibaba. You’ll notice it’s selling for up to US$2,000 a metric ton. Now I’ve lived in Southeast Asia for years, and one thing that is extremely common is a sight such as this: 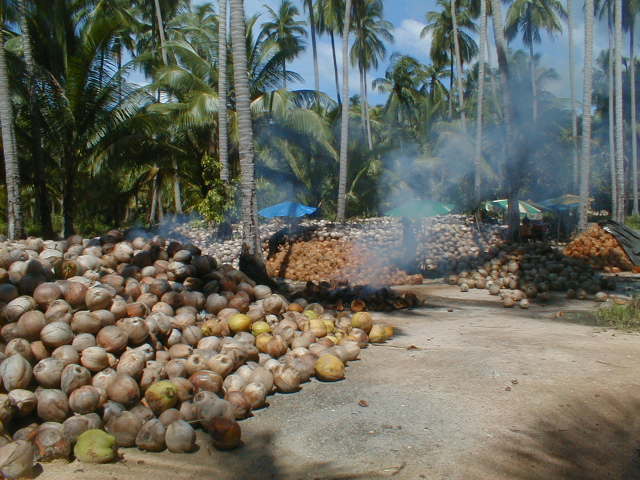 Yeah, they’re burnt simply to get rid of them.

For the most part coconut husks are treated as a liability. In fact, the company we began due diligence on actually pays someone to come and take their husks away for them.

Let’s take a commodity such as zinc, for example, which requires a complicated process to bring to market. Unlike coconuts, it doesn’t just grow on trees on the side of the road. First, an ore body needs to be identified, geological surveys conducted, a mine built and then the zinc needs to be crushed to powder, treated by froth flotation which is a process involving about 50% zinc and the remainder being sulphur, iron and silicon dioxide. Then with roasting the zinc in this concentrate it becomes zinc oxide. This crude zinc oxide is then turned into a metal using thermal smelting or eloctrolytic refining.

I haven’t even mentioned the costs associated with building the infrastructure so often required to extract zinc, as its not typical for ore bodies to be found conveniently next to railroad tracks, barges, or highways. Then there are the environmental impact assessment reports and the like involved in ultimately getting to our US$2,180 per tonne price point ,which is what it currently sells for on the LME.

The one thing that I absolutely love about my work is that what I inevitably start investigating so often involves opening up doors of opportunity and knowledge I had yet to identify existed. It’s enough to make anyone feel alive and like a child again.

“Eat coconuts while you have teeth.” – Singhalese proverb

Chris has founded and built several multi-million dollar businesses in the investment arena including overseeing the deployment of over $30m into Venture Capital opportunities and advising family offices internationally. Prior to this, Chris built a career at Invesco Asset Management, Lehman Brothers, JPMChase, & Robert Flemings.
MORE ARTICLES »
PrevPreviousYou Want to Know the Truth About the World? Ask a Child…
NextKilling Two Birds with One Stone: Capitalizing on Two Exciting TrendsNext

Great point on the market for coconut by-products. This is a variation of the same story we’ve seen in the West over the past 10-15 years…Midwestern US farmers used to pay contractors to remove corn husks from their fields after harvest (or would let their neighbor’s cattle graze on the land for free), and now thanks to the emerging biofuel/biomass industry we have a vibrant market for crop residue that enables farmers to realize a new revenue stream.

Interesting reading this. I am in Marshall Is at the moment, advising
gov’t on a coconut related project. About 60-70% of coconut trees here are senile. Japanese gov’t (via ADB) is funding a replanting project. So in the process they are cutting trees and doing nothing with it. My job is to find ways to earn money from these felled trees.

Coconut water price differential is crazy. I think it costs $10/litre in
Stockholm, when its on special! Perhaps margins will reduce once coconut water becomes more popular. It may still be considered exotic.

Great article! I was especially fascinated by the fact that they burn the nuts and have to pay to have them removed. If they had a portable biomass co-generator (such as those made by Agripower in the US) they could avoid paying those tillage fees and use that fuel to generate electrical power and co-gen!