Earlier last week we introduced you to the first part of a missive on shale oil by my friend Harris Kupperman. We followed that up with Part II where Harris dug deeper into some of the numbers in this sector – numbers which should be enough to bring terror into the hearts of even the most fear defying luminaries such as Rambo, Darth Vader and the Williams sisters.

Today I bring you Part III, penned in January of this year, where Harris discusses the leverage and subsequent securitization of shale oil and how interestingly similar it is to the housing bubble. Something which should be vivid in investors’ minds but due to human nature has already been forgotten.

It’s a truism that the further removed one is from the source of any investment the higher the risk of loss. Securitization is this wonderful means of sanitizing and making opaque investments. The convoluted spaghetti that all too often lands up being created serves to prolong and exacerbate an already silly market. Such are the markets…

At some point during the great housing bubble of the last decade, financial alchemists met over beers to solve an intractable problem. Decades earlier, they had perfected the art of taking mortgages, pooling them into mortgage backed securities and selling them to pension funds, insurance companies and other mindless institutional investors. These funds would always buy the senior tranches that were almost bulletproof, but what do to with the lower tranches? These were the tranches that would be worthless if there was even a small default rate. Who would agree to take these on for only a few dozen basis points of extra yield?

In the past, the guys securitizing these mortgages would often hold onto the unwanted equity tranches as they rarely defaulted and even if they did default, the fees earned on the securitization would more than offset the losses—but this still tied up capital. Was there a way to make this product slightly more appetizing—maybe even outright sexy for those same institutional buyers? 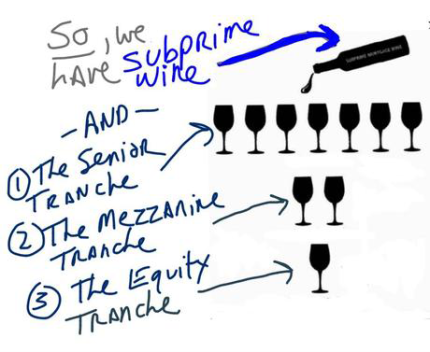 The offspring of these late-night beer sessions was the CDO-squared. Effectively, the garbage that the banks didn’t want was packaged into new CDO vehicles that looked just like regular CDOs. The Pavlovian response of the pension funds was to buy the supposedly lower risk senior tranches – especially as these were now highly rated by complicit rating firms. What about the equity tranches of this new offspring? Who cared? The banks were able to offload the majority of the equity tranches of the original CDO – if they were stuck with the worst of the worst, they could deal. The money was already made.

When it all blew up, lessons were learned. Mainly that if you repackage crap, it’s still crap. The equity tranches of these CDOs squared turned out to be worthless, as were the senior tranches. Senior debt or equity – crap is still crap.

What is the senior debt on a shale play that needs $100 oil to be profitable worth? With oil at $51, it’s worth roughly zero. What is the equity worth? Even less. What is the junk debt worth? Somewhere in the middle. The first epiphany in the shale patch will soon be that it doesn’t matter where you are in the capital structure of an uneconomic shale play. If that play needs $100 oil to work, you’re screwed. There is minimal salvage value there. At least the original subprime loan was worth what you could sell the underlying home for, minus the frictional costs along the way. The loss severity on these shale plays will be much higher. It is CDOs squared all over again.

Over the past few weeks, I’ve heard people articulate that there is something approaching $200 billion of junk debt tied to the shale space. For some reason, people seem to speculate that we may see a default rate in the teens. That sounds like $20 or $30 billion of total losses—as in, large but meaningless. Unfortunately, it’s probably better to use the CDO squared theory of finance.

If you recall in the prior two pieces, for the past decade, the game in shale has been to lock up land, borrow money and get oil and gas out of the ground. Since the decline curves are so steep, after only a few years, you basically have fully depleted land and likely less money back than was originally spent—hence you have to borrow even more money to drill more land and hope that no one notices that the returns are negative. Without new money going into the ground, the whole hamster wheel stops. You are left with depleted land and untapped land that suddenly is cut off from future debt funding. At that point, we learn the real cost of producing this oil and see who can self-fund, and who cannot.

What if almost ALL of the debt tied to the shale sector turns out to be largely worthless? Now we’re talking big money, as in hundreds of billions.

Shale spreads out into other sectors of the economy though. During the great housing bubble, all sorts of sectors blossomed as debt was created and money went chasing this boom. Just think of all the mortgage brokers, real estate agents, construction workers and whatnot that grew rich off of the housing bubble. I live in South Beach; this boom was what transitioned our economy from cocaine and money laundering into something slightly more respectable. Now look at the chart below. Effectively all of the gains in US employment since 2009, were in states that are related to the shale boom. South Beach was hit very hard from 2009 to 2011. What will this shale bust do to jobs in those states? 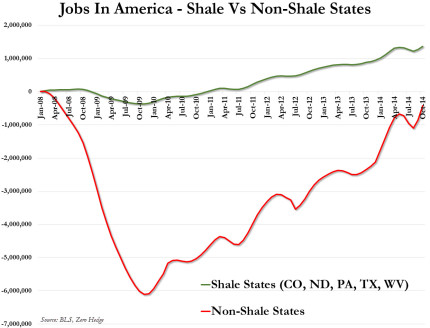 Then, there are the service providers. Exploration budgets are getting slashed as we speak. What is the value of a new highly specialized deep sea drilling rig designed for harsh arctic conditions? What about a fifteen-year old gulf rig? Look at some offshore drilling companies, they’re all highly leveraged and that was back when they could still command stratospheric day-rates. There are roughly 800 active offshore rigs in the world, already about 200 are idle, yet 200 more are expected to be delivered in the next 6 years. It is the oil tanker glut of 2010 onwards. Most of these tanker companies are shadows of themselves, if they even survived. Many of these drillers will blow up as well.

Traditional oil companies are in better shape as long if they aren’t leveraged, but many of them are. According to the International Energy Agency, total debt at oil producing companies around the world is roughly $1.6 trillion and has been increasing at $100 billion a year since around 2008. Suddenly, we’re talking trillions of dollars that are potentially at risk.

Let me give you some sense of scale on this risk. Before subprime blew up, there was roughly $1.3 trillion of subprime housing debt outstanding. Total write-downs by US banks after the GFC were just under $1 trillion. The debt at risk here is of the same order of magnitude as the great housing bubble, even before we consider all of the sovereign budgets that need higher oil in order to maintain fiscal stability. 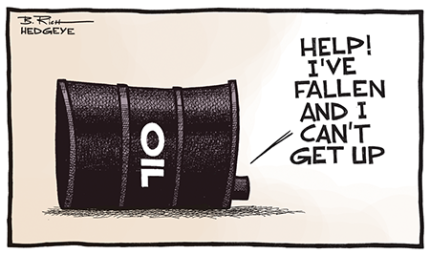 In part IV, I’ll talk about what sustained lower prices will mean to many sovereign budgets along with why the reversal of the petrodollar recycling trade could be disastrous for everyone. There will be winners and losers from the oil price decline. I think that this will be the dominant theme for 2015 and it is the reason that I am so focused on it. There have been some large moves in some of the most leveraged players in the shale space, but the big fireworks have hardly even begun. We are in the “subprime is contained” circa fall of 2007, phase of the market. It is time to get positioned.
[hr]
The above was written on 5th of January this year. Well before we experienced the following: 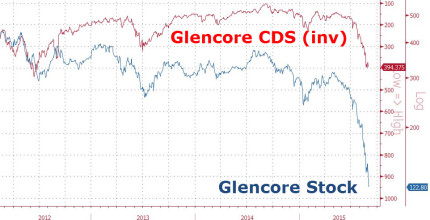 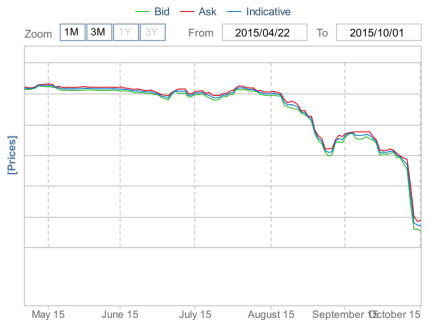 We will be publishing the next letter on Friday.

“Your selling something that you know has no value.” – Sam Rogers (from the movie Margin Call)