Pray Tell What Happens When…

Friedrich Von Hayek’s Road to Serfdom was first published a full 68 years ago. Hayek argues convincingly that all forms of socialism and central economic planning ultimately lead to tyranny. Interestingly, he argues also that this tyranny will come to us from people of good intentions and not from the likes of Stalin or Hitler.

Looking at the world’s big three currencies, discussed previously in my post entitled Ugly, Uglier and Ugliest, we are watching tyranny unfold in front of our eyes.

Higher taxes, increased regulations, more handouts…I don’t intend to rehash my bearish currency arguments herein, but rather to look at allocation of capital and discuss why I’m short the Yen and long a place absolutely nobody is paying any attention to.

Yes folks, call me crazy…it’s Fiji. I know we don’t mention it often…

There is way more investment capital flowing into Japan’s debt market than will likely ever flow into Fiji, and what a pity that is. With a trade balance now in free-fall, all the Nintendos in the world cannot save the Japanese. China could turn around tomorrow and say you know what, ”Take dem stinkin islands” and it would make nary a difference. 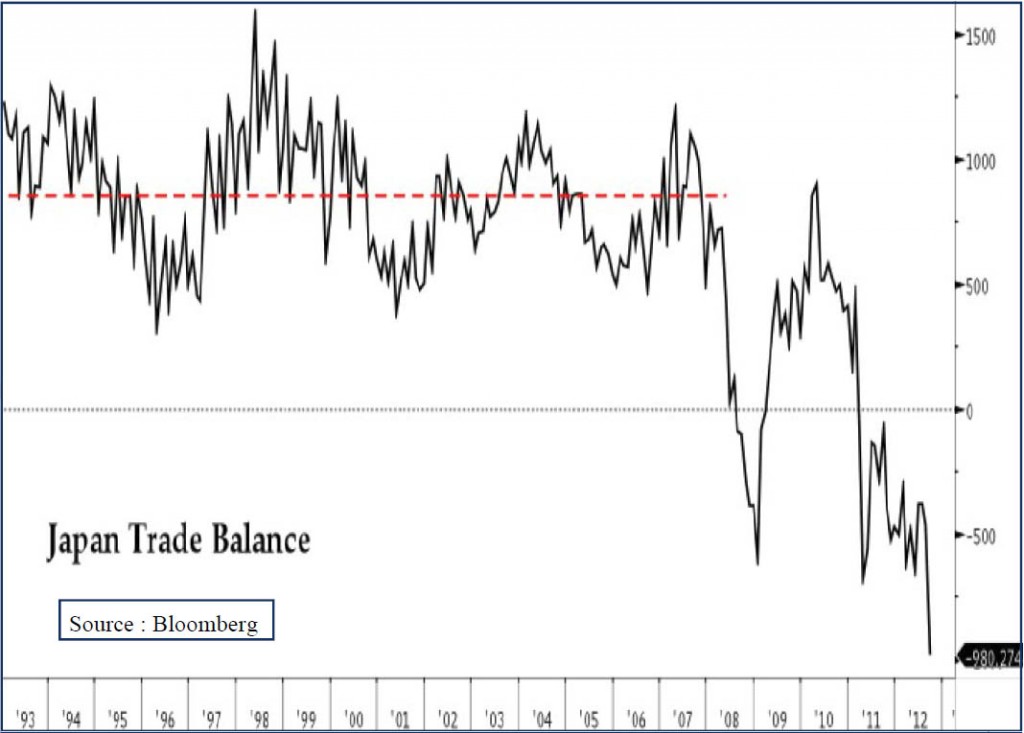 We produced a complimentary report on Japanese debt and how to play it, which you can access here. Suffice is to say we’re now even closer in my humble opinion to a massive devaluation of the Yen than when we wrote that report.

Our friend Harris “Kuppy” Kupperman recently spoke about his reasons for adding to his short position here. Although I’m always wary of agreeing with my friends, I struggle to find any reason not to on this one.

Global debt markets are now so completely out of whack that anyone who actually thinks the debts of the United States, Europe and absolutely, positively, Japan will be paid back needs their head examined.

These debts will NEVER be paid back. To think otherwise is tantamount to believing in the tooth fairy.

The question however isn’t about whether these debts will be paid back or not, but what fallout occurs when they aren’t, and in what fashion.

I find it difficult to envision a world where the continued “solution” put forth by central bankers changes its course from expanding their balance-sheets via bond issuances and the manipulation of interest rates below real rates of inflation.

History indicates this course is changed only when the printing press is taken away from those that are free to use it without retribution.

Market participants presently seem aware, but due to the enormity of the problem (and having no real historical playbook to work from) seem to have chosen to ignore the consequences of these actions.

It’s akin to being stuck on a runaway train, but deciding that looking out the window is just too scary.

This in and of itself allows men like “The Bernank” to continue with their failed and dangerous policies. Where their exists scant reaction from the market these monetary kings feel justified and emboldened by their actions.

As has happened with Greece, I believe the market will take away the central bankers present powers. This is likely to occur with such speed and ferocity that any ability to cope with the fallout will be non-existent.

Believing that sovereign powers that print their own currencies and debts are immune from the fallout is a convenient, academic yet incorrect argument.

When I read through history I find unbelievably foolish theories tend to surface just at the time when a system is on the brink of collapse. Remember all the reasons tech stocks were “justified”, and why housing prices were “justified”?

I suppose this makes sense. Humans are constantly trying to “figure out” their complex world. Justifying an existing set up allows us to settle an underlying mental argument in our own brains.

Attempting to make sense of world debt markets and why they seemingly defy gravity simply leads to a rise in unreasonable and preposterous thought. What is clear to me is that just because a market is out of whack, does not mean that it will lead to an immediate (or even reasonably soon) correction.

The fact is that nearly every bull market tends to defy gravity far longer than one thinks possible. That sovereign debt markets have defied gravity for a long time is no reason to begin believing this time is different.

As previously discussed, Mark and I have ZERO intention of being anywhere near social fallout, and at the same time we’re intent on profiting from what is inarguably a foregone conclusion.

Coming full-circle back to Hayek’s original thoughts on tyranny. It’s evident that the populations of the United States, Britain and much of Europe are experiencing increasing levels of tyranny, but what of Japan?

As far as I’m aware the country seems to be operating on much the same level as it has for the past 20-odd years or more. What and how will the populace feel, and what will they finally “do” when the house of cards their esteemed leaders has created inevitably comes crashing down on them..?

Stay tuned and find out!

“There is no wavering in our relationship of trust…We have not overcome deflation yet so the priority should be on that. We’d like the BOJ to cooperate.”- Shinzo Abe

Chris has founded and built several multi-million dollar businesses in the investment arena including overseeing the deployment of over $30m into Venture Capital opportunities and advising family offices internationally. Prior to this, Chris built a career at Invesco Asset Management, Lehman Brothers, JPMChase, & Robert Flemings.
MORE ARTICLES »
PrevPreviousHeads up Cowboys!
NextA Revolution in Agriculture – Part INext

I always enjoy reading you and Mark’s musings from where ever you find yourself in the world. With respect to Japan, I know their problems fairly well and have read through the presentation you guys put together. I have been debating putting the trade on myself but am wrestling around with what MMT says about it and like you as well as Kyle Bass said recently that sovereign nations with access to a printing press can certainly default. I’ve been reading around this but have yet to really find a solid answer on it. Could you elaborate on exactly how a sovereign nation like Japan can default? Many thanks.

I find it interesting that when researching history you find all manner of ridiculous theories postulated, most prevalently at the brink of crisis. Remember all the reasons justifying internet stocks in the 90’s, and the reasons for “investing” in real estate in early 2000’s?

MMT is in my mind in the same boat. Sovereign nations can default via inflation. In the case of Japan the fact that their debt is held mostly by Japanese doesn’t preclude them from this. Ultimately they can pay back the debts by printing gobs of YEN but the external market will simply revalue the yen. The sheer extent of their problems ensure the revaluation will likely be swift and unforgiving.