While Mark and Chris are up to their necks in salt water and coconuts at the Fiji Meet-up, I wanted to discuss an interesting opportunity in Fijian tourism.

No, I’m not going to babble on about gorgeous scenery and warm water whereby those who start a tourism company will bloat with wealth. I would rather talk about something much sexier…feeding the hundreds of thousands of tourists that wash up on Fiji’s shores annually.

Tourism has been the lifeblood of Fiji for decades, employing many thousands of islanders, all-the-while acting as a backbone for the government budget. I am surprised the national slogan isn’t “Promote tourism or bust” because it is relied upon and needed that badly.

Nonetheless, the country’s balance of trade has been negative for years, largely due to the imports of energy and foodstuffs. Last year alone Fiji imported A$325 million of foodstuffs, a large proportion which was consumed by the over 300 hotels and resorts on the islands. Mind the fact that the economy is a paltry $3.81 billion and we are talking some serious moolah!

Now, the issue is not necessarily one of insufficient supply on the islands. Mark and Chris will gladly tell you how inexpensive good produce is at the markets. So if the Fijian’s aren’t paying $7.00 per kilo for tomatoes in the winter time, then who is?

The crux of the problem is that the majority of farms in Fiji are small holder and with insufficient cooperatives (and lack of access to capital) to gain leverage, they are unable to supply the hospitality industry with either the quantity or service required. This has led to hotels being serviced by large Australian and New Zealand food distributors, leading to high prices ($7 per kilo for tomatoes) at resorts. If you’ve visited the country you know what I am talking about. Food at resorts ain’t cheap and freshness is up for debate.

So what does this all mean?

Well, the further I dig into the hospitality and agricultural industries, the more intrigued I become. There is only a minor presence of commercial agriculture in Fiji, sans sugar  cane, and as Chris mentioned in his post “Hope”, land is cheap and labour even cheaper. All of this means that there is an opportunity to service the hospitality industry locally, something I have been speaking with friends about doing. It’s a no-brainer to supply local, reliable organic and fresh produce to this marketplace.

The incentives for projects like this vary widely, but as the Meet Up delegates are learning, tax breaks exist and we can even get our equipment in the country duty free. That’s not to mention the 10% tariff (used to be 20%, darn) on all produce, dairy and meat imports, giving us a natural buffer from foreign competition. 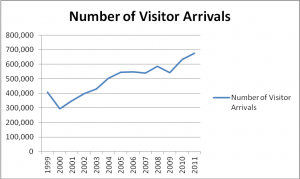 While growing food is all nice and dandy, if the high-end market isn’t around, then a growing operation would be a flop. So naturally my intrigue stems from the growing tourism numbers (see chart above) which will provide a backstop and deepening market for high quality, fresh produce. And according to my studies, using history as my guide, where there are growing numbers of people there is an increasing number of mouths to feed. Thank you Woodstock!

“When it is understood that one loses joy and happiness in the attempt to possess them, the essence of natural farming will be realized. The ultimate goal of farming is not the growing of crops, but the cultivation and perfection of human beings.”― Masanobu Fukuoka, The One-Straw Revolution