“The person who risks nothing, does nothing, has nothing, is nothing, and becomes nothing. He may avoid suffering and sorrow, but he simply cannot learn and feel and change…”

Leo Buscaglia nailed it with the quote above. Ask any friends, colleagues or contacts you know who’ve enjoyed success about risk. If they’re anything like me or my group of friends, they’ll tell you that regretting risks NOT taken is higher on their list than regretting risks taken.

This is the polar opposite to what we hear from the mainstream. It seems we bipeds hate pain so much that we’ve allowed the bureaucrats to develop encyclopedic volumes of laws “protecting” us from it. Entire industries have been built around providing said protection.

Everywhere you look we’re being told to “watch out,” to “be careful,” to be fearful. Risk is everywhere!

Terrorists with dark beards and funny accents lurk on street corners. Pedophiles, while stroking their mustaches, snickering to one another, peer through dark sunglasses at our kids in shopping malls, just waiting for Billy to stray. Billboards on freeways tell us to slow down or die in a bloody pool of mutilated meat. Children are warned by teachers against climbing trees, parents won’t let their kids out in the sun between the hours of 10 AM and 2 PM (really?), and news channels terrorize us about Ebola.

Fortunately for us all there are groups of people who are driving forward with innovation, purpose, creating, building, living and breathing… they are called entrepreneurs. Try to scare them with real and imaginary risks? You may as well be trying to teach a lamp post how to code HTML… and thank the heavens for that. 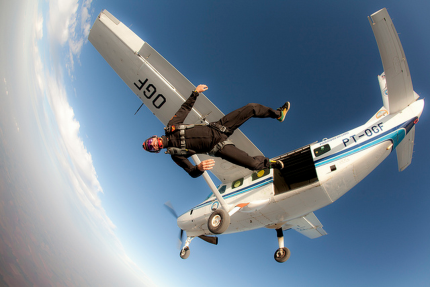 Risk taking is required. That’s a fact. We need it like we need air, food and water. Without it we’d all still be enjoying each others company sitting huddled in caves in Africa somewhere. Some of the world’s most amazing, life-enhancing inventions would simply not exist: air travel, plumbing, the internal combustion engine, electricity, the microchip, quantum physics, vaccines, the string bikini… None of it.

Any individual, family, or even country cannot ignore the reality that invention, growth and wealth all have a twin sister, and that twin sister is RISK.

Let’s for a moment consider this from a macro level. The hermit kingdom of North Korea is a great example. Not a lot happens there unless young Kim says so.

It’s not that North Korea is afraid of risk on an individual level but certainly the moron running the place sees risk in allowing citizens to develop their own businesses, trade and interact with the world. A country can ignore this reality, but it cannot ignore the consequences of doing so.

So, if the anti-risk brigade aren’t successful with dumbing down everyone, what exactly is it that drives risk taking behaviour?

The reason we will always have humans taking risk and moving us forward is due in no small part to dopamine. This is the stuff that sends a rush of euphoria through your body. Dopamine is why it feels awesome to drive fast, snowboard, water ski, bungy jump, sky dive… and even why it’s so exciting to “create” things.

At the root of our animal brain sits the limbic system. This controls our emotions, our behaviour, our motivation and importantly our adrenaline flow. When we do something that our brain perceives as dangerous it dumps a load of dopamine into our body. Coincidentally this is exactly what happens when you “snort” cocaine! Not recommended by the way!

In fact, identifying such an opportunity before wide spread vindication would likely have been a euphoric experience. Whoa, look at this baby! These guys are complete fraudsters. We have to short this one!

Here is the kicker. Those endorphins make you stronger, they make you more alert, they heighten your senses. This is why when something goes bump in the night your body stiffens. Your body senses danger and sends blood to your muscles. Sure your face goes white, but you’re not trying to pick up a girl, you’re getting ready to fight for your life.

Taking risk as an entrepreneur, as a trader or as an investor is critical. That risk has to be calculated and thought through. I’m not talking about gambling in Las Vegas – that’s not taking risk, that’s just plain stupid. There isn’t an unknown risk to losing your money there. It’s pretty much guaranteed.

All the best investors and traders I know are laser-focused on risk, and how to mitigate it.

In part 2 on Thursday I’ll discuss what is arguably one of the best risk mitigation methods for anyone with even modest assets, and chances are you’ve NEVER heard of it.