World Out Of Whack: The Shifting Zeitgeist

Talking with old people is a “helluva” lot of fun. I mean really old people – those closer to having a lid over their heads. People who grew up watching the advent of cars, TVs, and who still marvel that we have shaving cream in a can and chicken in packaging.

You realise how damn lucky we are today on so many fronts. Women very rarely die in childbirth, we can reasonably expect that our kids won’t die from some horrific disease before making it to adulthood, and we take for granted food and wine from the other side of the world and sundry other goods which we find in our local supermarkets and shopping malls. Foods and goods that a generation ago either simply didn’t exist or were available only to people with bow ties and butlers.

Most people living in advanced economies used to take for granted the idea that tomorrow would likely be better than today. Real positive incomes have been the norm since World War II. Sure, there have been very brief periods, one notably during the 70’s where inflation was high and this wasn’t the case, but the trend has been positive and steady. Up until around 1993 when it all ended.

A recent McKinsey & Co report provides us the unfortunate reality.

Talking of the advanced economies, the report mentions that:

“Between 65 and 70 percent of households in 25 advanced economies, the equivalent of 540 million to 580 million people, were in segments of the income distribution whose real market incomes—their wages and income from capital—were at or had fallen in 2014 compared with 2005. This compared with less than 2 percent, or fewer than ten million people, who experienced this phenomenon between 1993 and 2005.” 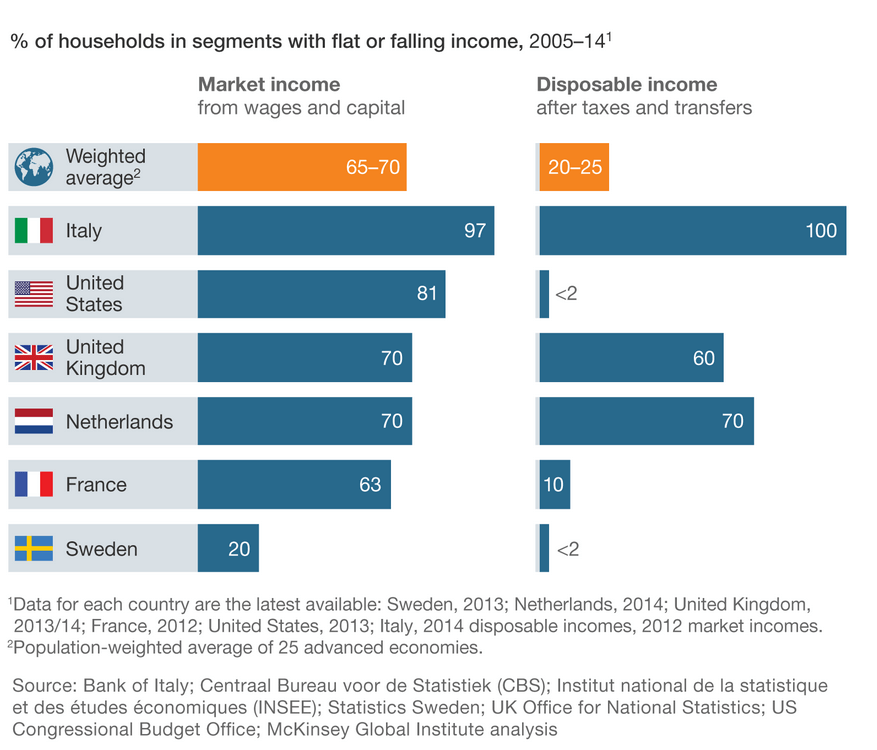 Well-fed people have little incentive to disturb the status quo, even if they don’t agree with it. They have too much to lose and so, while they’ll sit down with Johnny at the bar and grumble about this and that, they won’t actually DO ANYTHING about it.

Today an expectation that tomorrow should be better than today is no longer a reality and the repercussions are coming fast and furious. Increasingly the discussion with Johnny at the bar is taking a step further.

As we near the end of the debt super-cycle and central bankers flaunt 30 years of bubble finance, we find ourselves with not only the largest and most unsustainable debt levels the world has ever seen but also large and rising wealth inequality. Ironically, it is this inequality which is driving political change, and these political changes may well accelerate the end of some pretty awful ideas. Ideas such as the Euro, Quantitive easing, ZIRP, NIRP and myriad other policies which have led to global financial imbalances we sit with today.

Just over a month ago, the Brits voted to rid themselves of their mandarins in Brussels. As I’ve mentioned repeatedly, the votes cast are much more “against” the establishment than for any particular party.

In Europe we have not only the monumentally stupid idea of importing young men of fighting age from countries where the customs and belief systems are at complete odds with a secular Europe, but we also have an arrogant undemocratic elite whose disastrous policies preside over the greatest income gap since World War II.

Like homing pigeons, the ramifications of this phenomenon are now coming home to roost. They are both economic and social.

Just like a good bikini, the below graphic is quite revealing. It shows the breakdown for Americans, though I suspect it’s not significantly different for Europeans (hat tip to Todd Harrison for the chart). 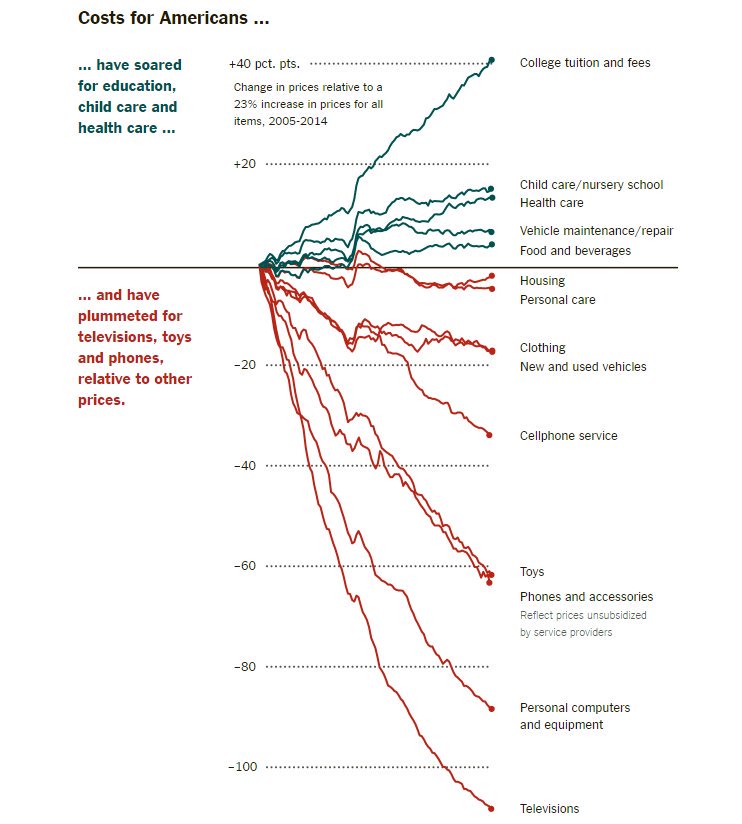 The reason why we see such rising anger in both Europe and the US is because of a simple fact: people are worse off than a decade ago and they are looking for answers.

When the FED “saved” the world from a collapse in 2008 they in fact sowed the seeds for the political change coming. Brexit was simply “hors d’oeuvre”.

Consider that not a single banker or mortgage broker involved in the housing bubble has been put behind bars and realise that the populace, while ignorant of how financial markets operate, know that they’ve been screwed as they watch the ruling elite take home bonuses they could only dream of.

This is all they need to know.

It is why the “Trump phenomenon” exists. And in fact, every time Trump says something crazy like, “the second amendment people could deal with Clinton,” he further distances himself from the establishment.

The establishment would never be caught dead saying such a thing in public. They’ll gladly carry out any amount of lying, cheating, stealing, and murder but would never be caught mentioning it. Doing so is considered absurd. The mainstream media for their part are in shock, completely unsure of how to deal with such apolitical statements.

When we survey the crime scene, we find a shrinking middle class and an openly arrogant and criminal political class. A recipe – if ever there was one – for a rapid and radical shift in the zeitgeist.

When  economic prospects of citizens do not advance they lose faith in the system under which they are living in. Topics such as free trade and immigration become hot topics. Free trade and globalisation are increasingly seen as a bad thing for people who feel that they are not a beneficiary of this. And immigration is seen as “them taking our jobs”.

The McKinsey report mentions something else which is very important to understand: 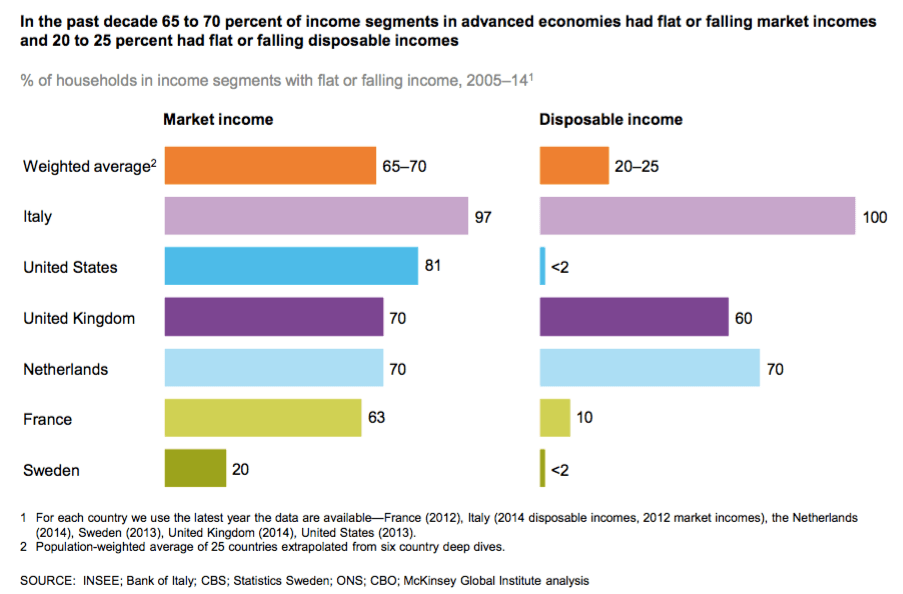 This, folks, is a burgeoning groundswell of disaffected angry people. You can’t have over 50% of income groups with fewer chickens in the pot and not expect a backlash.

Regardless of the country you live in, or what political views you have, I’m curious to know the following:

I’m interested in the ramifications of this and how it plays out in the financial markets. As a capitalist, my job is to protect my capital and profit from the unfolding events.

“Politicians are like sperm. One in a million turns out to be an actual human being.”

Chris has founded and built several multi-million dollar businesses in the investment arena including overseeing the deployment of over $30m into Venture Capital opportunities and advising family offices internationally. Prior to this, Chris built a career at Invesco Asset Management, Lehman Brothers, JPMChase, & Robert Flemings.
MORE ARTICLES »
PrevPreviousConversation With A Gold Veteran
NextAsk And Ye Shall ReceiveNext