The Potential Exists For an Epic Short Squeeze in Physical Gold

I recall a long time ago when I was easily excited by the unqualified love of young inebriated women, hedonistic experiences, fast cars, guns and seemingly unusual setups in financial markets, which promised fortunes if traded correctly.

I now find that I just enjoy a day with my kids and later a decent glass of red. Ah, simpler times! I’ve also realised that “unusual” setups in financial markets typically turn into nothing more than a loss of my capital. Betting on outcomes which seem “so damned obvious” isn’t as easy as one would think. Probabilities, as I discussed last week, are a key factor, as is risk/reward.

This is of course as it should be. The markets are there to extract money from inexperienced, gullible “traders”. OK, some are experienced and just careless, but many are newly minted dreamers, set out into the world by some seminar “guru” who convinced them they could day trade their life savings into a small fortune. You know what they say about small fortunes, right? Financial Darwinism!

Given this backdrop, I had a recent phone conversation with our friend Tres Knippa. For those that don’t know him, Tres is a broker and trader on the floor of the Chicago Mercantile Exchange (CME). Clearly not a Johnny-come-lately. Tres shared with me some numbers.

The numbers Tres shared with me were:

These should be very scary numbers for the folks running the Comex, but even scarier numbers for anyone not holding physical gold and trading paper!

Tres also shared the chart below with me. This is a graphical representation of the amount of paper gold versus the Registered Gold available for delivery: 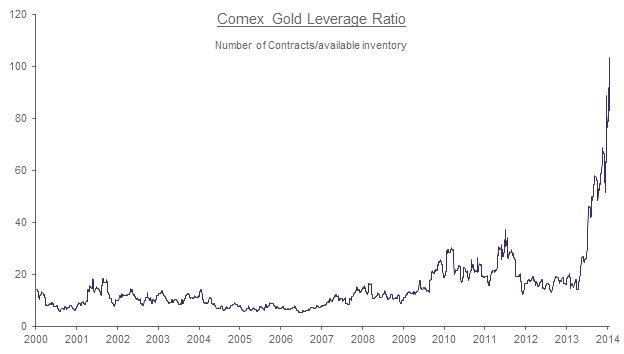 Zerohedge recently posted an excerpt from a video Tres did here. Now, for those who are paying attention, the similarities between this little setup and an extended game of Jenga cannot be dismissed out of hand!

Zerohedge also posted a neat little story about the German’s only having recovered a paltry 5 Tons of gold from the US, after a year! You can read all about it here. In short they have repatriated just 37 tons of the 674 tons they have promised to repatriate. At least the Comex may get forewarning of any demand for delivery from the NSA, who is likely still monitoring Sausage Lady’s iPhone. Regardless, it’s unclear to me what they would do about it should that demand for delivery actually come down the wire.

Over 2 years ago when we put together our Japan report I mentioned to Tres that I preferred to go long Gold, short Yen. At that time his preferred trade was centered around the JGB options market, and to be long the USD short the Yen. Looking back he was right and I was wrong. The USD has indeed performed better, and likely will continue to outperform in 2014. Although up to this point it’s been more a factor of a breather in the gold bull market than USD strength.

I’m a gold bull, not a gold bug. I do believe that the long term trend for gold is bullish. This current setup clearly has the potential for some fireworks. Maybe nothing happens (doubtful), but the risk/reward setup is rather favourable from where I sit. Heads I win, tails I win.

Whatever you choose to do with the above information, I encourage readers to never ever confuse “trading for profit” with investing. I’m happy to trade futures contracts, buy gold in the FX spot markets – essentially trade paper in one form or another, but I would NEVER let that obfuscate the fact that I need to hold PHYSICAL GOLD as protection. Timing a profitable trade is like passing gas, it is largely a matter of knowing when it is inappropriate, and acting accordingly!

Grant Williams, the prolific editor of Things That Make You Go Hmmm… said it perfectly in his latest missive:

“Gold is a manipulated market. Period.
“2013 was the year that manipulation finally began to unravel.
“2014? Well now, THIS could be the year that true price discovery begins in the gold market. If that turns out to be the case, it will be driven by a scramble to perfect ownership of physical gold; and to do that you will be forced to pay a lot more than $1247/oz.
Count on it.”

Think about this as a parting thought. Would the Comex, if under pressure for delivery, ever void your positions in order to “stabilise” the market? Or, would that just not be palatable in the Land of the Free? As Grant said above, “Count on it.”

For the traders out there, Tres shared with me another anomaly in the gold markets which he’s been trading successfully for the last couple of months. I’m in the process of translating this from “trader speak” into English, and it will be sent out to members of our currently complimentary Trade Alert service shortly. You can get access to this and more by dropping your email here.

“I firmly believe that in the years to come, when we look back at the great game being played in gold, we will pinpoint January 16, 2013, as the day when it all began to unravel.
“That day, the day the Bundesbank blinked and demanded its bullion, will be shown to be the beginning of the end of the gold price suppression scheme by the world’s central banks; and then gold will go on to trade much, much higher.” – Grant Williams
Share
Tweet
Share
Reddit
Email

Chris has founded and built several multi-million dollar businesses in the investment arena including overseeing the deployment of over $30m into Venture Capital opportunities and advising family offices internationally. Prior to this, Chris built a career at Invesco Asset Management, Lehman Brothers, JPMChase, & Robert Flemings.
MORE ARTICLES »
PrevPreviousThe #1 Investment Going into 2014?
NextBuying Bombed out Equities for Outsized ReturnsNext

We can all read COMEX’s weekly numbers ourselves. Misreading them gives a false impression of nonexistent shortages. Supply and demand have more impact on gold’s daily price than any short interest.