If It Seems Too Good To Be True…

When my children were born I watched mesmerized as my wife did what countless women before her had done.

The physical act of giving birth must be quite simply one of the most painful experiences known to man. Or in this case to women. For some women, childbirth can go on for literally days. And when the baby finally comes, sometimes it’s so bad they have to bring out those salad tongs to help the process along.

And yet, as painful as it, is women go back for more.

Why would you go through the most painful experience in your life and then say, “Hell yeah, let’s do that again!”?

The answer lies in dementia. Humans are biologically designed to forget pain and focus more on the good stuff. Women giving birth receive immediate gratification in way of a small baby in their arms. The emotions involved trump the pain experienced.

I’m not sure any such excuse can be given for investors who despite plentiful evidence will routinely repeat painful mistakes of the past.

Whether it be TMT stocks in the 90’s, US housing in the mid 2000’s, or tulips in the early 17th century – people’s instincts never change.

Markets are a reflection of people, and people’s emotional instincts don’t change.

History shows that – like women opting to have more kids – investors routinely head back into investments showing all the signs of pain experienced from previous painful experiences.

Market bubbles all exhibit the same path to crazy.

A new market force or technology enters the market, creating efficiencies and/or demand. Or in the case of real estate, it can be something as simple as a boom in a commodity. Then the real estate market closest to business conducted around this commodity finds increased demand.

This is a rational stage and there will even be many who, based on previous growth rates and valuations, question the new values.

In this stage there isn’t any bust because there are fundamental reasons for the values to keep rising. And importantly, you’ll find that lending practices are still conservative.

The final blow off stage – the stage where people lose their heads and have their financial lives decimated – takes place when FOMO takes hold and prices diverge from any underlying business activities (i.e. the original drivers of the new rising values).

At this point prices become unhinged to any sort of cash flows or business environment which first began driving the asset values.

“New paradigms” are mentioned as even the respectable and conservative finally succumb to the euphoria.

The Canadian real estate market largely avoided the crisis and collapse we saw in US house prices in 2008 where prices dropped by more than 30%.

According to World Bank figures, Canadian GDP has been crawling along at 2.4% for the last 5 years, curiously the same rate of growth the US has had.

And yet, its real estate markets, Toronto and Vancouver in particular, have been doing anything but crawling along.

Even if we take into consideration the exchange rate differential, today Canadian real estate is over 50% more expensive than US real estate. 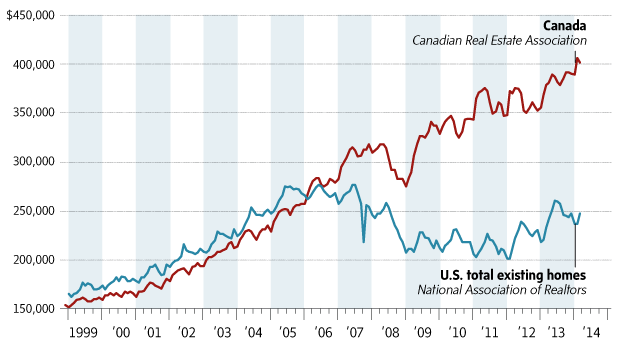 Vancouver is not unlike any other city in the world. Sure it has pretty vistas, great food, and shoddy weather for half the year, but then so do many other cities around the world.

There is no “new paradigm” in Vancouver that makes it “different this time”. It is just another market – not unlike some other overpriced cities – that has this wonderful mix of money laundering, low interest rates, and speculation.

With an income to asset ratio of 11.7, Vancouverites are certainly taking on a lot of risk and clearly a lot of leverage. This ratio is still behind cities such as Shanghai and Hong Kong, though the credit bubble in China has a lot do do with that.

Like in Sydney, Chinese money has been driving a lot of the demand in Vancouver too. Chinese buyers now make up over 30% of all real estate buying there. Real estate has always been a favoured means of laundering cash, and Vancouver, after Hong Kong, has become a veritable safety box for hot Chinese money.

This is an Achilles heel for Vancouver’s market as I’ll show you in a minute. But the average Canadian is too busy caught up in the euphoria of ever rising prices.

This is the typical latter stage of any irrational boom where one finds an acceleration in frenzied buying.

So, why does China matter?

With China’s debt soaring to 237% of GDP even the most casual observer would begin to scratch his head. The Chinese government is borrowing heavily to fund and achieve its 6.5% growth targets but we’ve seen how this typically ends.

George Soros, the legendary investor, is so worried about the global landscape that he’s come out of retirement to work hands-on with his managers and here’s what he has to say about China:

“What’s happening in China eerily resembles what happened during the financial crisis in the U.S. in 2007-08, which was similarly fueled by credit growth. Most of the money that banks are supplying is needed to keep bad debts and loss-making enterprises alive.”

What this means for Canada, and Vancouver real estate prices in particular, could be catastrophic.

Problems in China will have a disproportionately negative effect on Vancouver real estate prices.

Oh, and one other thing.

The bank of Canada rates the probability of a sharp correction in housing prices as “very low”.

Long term readers will know that politicians are generally completely oblivious to the bubble as it’s unfolding in front of them.

“Irrational exuberance is the psychological basis of a speculative bubble. I define a speculative bubble as a situation in which news of price increases spurs investor enthusiasm, which spreads by psychological contagion from person to person, in the process amplifying stories that might justify the price increases and bringing in a larger and larger class of investors, who, despite doubts about the real value of an investment, are drawn to it partly through envy of others’ successes and partly through a gambler’s excitement.” ― Robert J. Shiller, Irrational Exuberance

Chris has founded and built several multi-million dollar businesses in the investment arena including overseeing the deployment of over $30m into Venture Capital opportunities and advising family offices internationally. Prior to this, Chris built a career at Invesco Asset Management, Lehman Brothers, JPMChase, & Robert Flemings.
MORE ARTICLES »
PrevPreviousWorld Out Of Whack! (Some Week In June Of 2016)
NextCan’t We Just Print More Money?Next