Why Bitcoin is Important

These are some of the opinions I’ve heard thrown around when discussing Bitcoin.

I have no particularly original insights into Bitcoin, and I won’t pretend to understand the technology behind it. I can barely understand how my coffee machine makes such great coffee. This is the complexity of the world.

Firstly, let me say that I think Bitcoin is “cool”. I love disruptive technologies. 5000 years ago shipping changed the world. I discussed this in depth in an article entitled Predicting Prosperity. I alluded to the “Guano age” of the 1800’s which was destroyed by the advent of nitrate-based fertilizers.

The Internet, at least, the Internet that most of us know has only really existed since the mid-90’s, and even then VOIP and data streaming were far from common. Technologies which we take for granted today have often only been around for less than a decade. Yet we’re all comfortable enough with them.

When a friend introduced me to Bitcoin nearly 4 years ago now I was busy, looked quickly at it, decided I didn’t understand it and dismissed it as quackery of some kind. This despite my friend being a man I hold in very high regard. Hindsight, as they say is 20:20. It was still very early days in Bitcoin history.

Fast forward to today and we’ve spent more time learning about digital currency (not Bitcoin per se) and this is how we see it.

I found the chart below from Gartner. It provides us with a visual image of what I’m talking about. 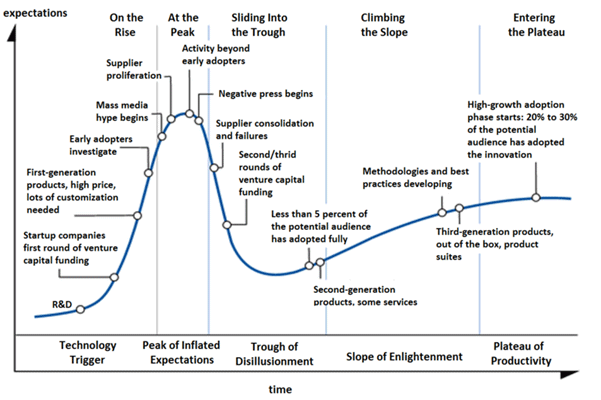 The crazy, silly hype that existed is now over, and I think we’re in the third stage.

The value then perhaps lies not in Bitcoin but in the technology. Technology is a market I can understand and play in. Trading, or rather gambling on what price a Bitcoin should trade for isn’t.

How useful then is the technology?

“in 2013 money transfer fees would have fallen by 90% if Bitcoin had been used. Global transaction fees at retail point of sale, meanwhile, were $260bn on over $10trn of sales. Using Bitcoin those fees fall by almost $150bn to $104bn.”

I don’t care who you are, these sorts of numbers are compelling and the odds favour this technology being utilized in the future.

How Best to Play It

Investing in Bitcoin is easy, and the crypto currency is relatively liquid.

The market is currently disillusioned with the price of Bitcoin. It’s collapsed from well over  $1,000 to just over $400 today. The guys entering the market who not 6 months ago had all the arrogance of a pimply-faced teenager who’d found the powers of tequila and testosterone, today sport far humbler views!

The technicals on the chart are very favourable and hard to ignore. I think that the next leg is coming and it’s going higher, much higher.

Chris has founded and built several multi-million dollar businesses in the investment arena including overseeing the deployment of over $30m into Venture Capital opportunities and advising family offices internationally. Prior to this, Chris built a career at Invesco Asset Management, Lehman Brothers, JPMChase, & Robert Flemings.
MORE ARTICLES »
PrevPreviousDestroying Wall Street by Democratizing Financial Analysis
NextBut It Says So on Facebook!Next