It seems as if all the present focus in financial markets is on Europe and “solving” their debt crisis. Debt is by far the biggest problem facing the developed world. What is interesting is that there lurks a far greater crisis on the horizon in my opinion, one that dwarfs the present European drama. Let me explain.

Shorting the JGB (Japanese Government Bond) market has been a graveyard of hedge fund manager’s capital for well over a decade now.

It has seemed both inevitable as well as imminent to many an astute market observer, that the Japanese government would not be able to sustain ZIRP  (Zero Interest Rate Policy) indefinitely while debts ballooned. At some point the bond vigilantes would have their say.

Betting on rates rising to compensate for the additional risk attached to skyrocketing debt has been both logical as well as completely wrong for over a decade.

The reasons for the Japanese government’s ability to maintain ZIRP in the face of increasing debts could make for an entire and very long blog post so I’ll keep it brief… very brief.

Yep, that’s it. The Japanese keep their money at home preferring to invest their cash in the perceived safety of JGB’s, which has allowed their government to fund insane and wasteful infrastructure projects. Fully 98% of the population are pure Japanese. It’s nearly impossible to acquire citizenship if you are not Japanese. Outside of small tribes still living in the jungles of Papua New Guinea or the Amazon basin, the Japanese are possibly the most homogeneous society on earth.

How we got here – Achieving the impossible

Japan for the last 20 years has been China’s largest trading partner. A period that has seen arguably the largest Asian boom in history. How is it that Japanese tax revenues in nominal dollars today are the same as they were in 1985? At the same time expenses are over 200% of what they were in 1985.

What ZIRP has done is to have future expenses spring-loaded like a tightly coiled spring. This has been achieved due to the debts of the government being internally financed. (Roughly 96% of JGB’s are domestically held). Xenophobia, coupled with deflation have allowed for this extraordinary situation to develop. This cannot last much longer for a number of reasons. 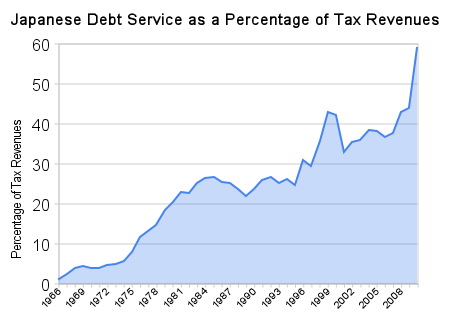 There is no way that interest rates can be moved higher by the BOJ. It’s just not mathematically possible. When you realize that they cannot maintain both ZIRP as well as the integrity of their currency, then you realize too that the Yen is headed for a very large iceberg.

2. The tax base in shrinking due to demographics, shown in the chart below

This is important since those same tax revenues are now declining. Furthermore with nearly 1/4 of the population now entering retirement they will be selling their bonds to finance their existence. Japan cannot grow its way out of debt.

The Japanese have financed themselves for 20 years now, and while their debts began piling up, so too their overall interest expenses actually declined. This is due to pushing their capital costs rate down to zero. Now interest costs have begun to rise even while their cost of capital has remained at zero. Simple math tells me they have no means of financing their debts other than looking offshore.

In all honesty I’ve been puzzled in the past that we can get to the stage we’re presently at, and I have to confess to losing money on shorting both US Bonds and JGB’s in the recent past.

A couple months ago I began to build a position. The way I’m playing it is NOT to enter the futures market in order to short the JGB’s but to simply go long gold vs the Yen in the FX market. This allows me a number of things.

When the Japanese government is forced to seek bond buyers offshore, which will happen due to the demographics, I expect a rise in rates. We only need a very small move to tip the boat. This is what happens when you’re highly leveraged. Lehman and LTCM found out the hard way, and Japan is going to find out too.

If for some reason that I’m not smart enough to see at this point in time, they manage to pull it off for another couple of years, then all that will happen is the “future expenses spring” gets depressed even further. The plus side (if you’re short) to this is that I cannot see any means of letting this balloon down lightly. The ensuing panic will be historic.

There is no mathematical way that this can last in the face of the fundamentals. All arguments I’ve heard against this idea fall into two categories. Namely the “yeah its been a losing trade for so long” followed closely by “I’ve been burnt alive already and don’t have the stomach for it any longer”. Neither of these objections present a mathematical reason why this can continue.

Am I missing something?