The Importance Of Asking Good Questions

About 3 months ago I decluttered. Not the horrible kitchen cupboard which has everything from screw drivers to toothpicks, sea shells, and a hairbrush the dog chewed. I decluttered mentally. For the uninitiated or curious, you can read the background here.

The results so far have shocked me.

My productivity has quite literally blown through the roof.

For a start. Focus! When I shared “Wild” with you I was very focused. 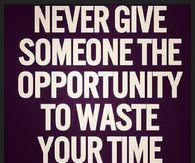 s part of creating better habits, I’m disengaging with people who waste my time and I strongly recommend it. It’s been blissfully liberating.

In a world littered with information, it’s imperative to be discerning. You can’t cover everything, nor should you try. Time is the one thing you’re never getting back unless Elon Musk invents a time machine. But given his disastrous mess with Tesla and Solar City I’m not hanging around waiting.

Let’s run through typical things which happen every day in business but are a complete and utter waste of time. You may recognise them.

So, how do people waste your time?

Here I’m talking almost exclusively about business-related interactions, though they can certainly apply to social communications.

Or sending you emails which have no meaningful outcome attached to them but on the face of it fall into the theme of work. I can honestly say that over 80% of the business emails you’re getting are likely a complete waste of time.

You get sent an email that the sender, in their misguided, knee-jerk, reactionary multi tasking and thoughtless mind, sent you and you reply, copying someone else and now 3 people or more are involved.

Then the questions start flying to identify if there is an outcome and who, if anyone, should do anything.

This goes back and forth a few times and more people get dragged into the fray before another email which is deemed more important arrives in your inbox. You begin to ignore the first email thread (still going but running out of steam) but annoyingly, because it remains unresolved, it is still seeking your attention.

In your gut you know it’s going nowhere but you keep engaged, partly due to the fact that you need to spend more than a few minutes to determine why it’s been sent to you and how it fits into your outcome.

And then there is a part which is due to social etiquette. It gets left in your inbox – in that no man’s land where it’s neither dead nor alive but importantly there is never any outcome because it should never have been sent in the first place.

This happens dozens of times a day every single day. It amounts to a colossal and exhausting waste of time.

Here’s how to deal with them.

Screw social etiquette. Tell the person kindly but firmly to please think about what they’re sending you before hitting send. Explain why it’s offensive (wasting your time) and if they persist, block them from future engagement. Your life is at risk, quite literally. Don’t be shy about this. I mean it. You have no idea how much they are suffocating you until you rid yourself of them.

Fail to kill this and you risk getting dragged into doing the same thing yourself. It’s like a digital water cooler where all the laziest and stupidest people in the office linger, munching on potato chips and Mars bars.

I guarantee you that you’re cementing your life into one of mediocrity and leading to a retirement blessed with cat food and bad hips because, of course there isn’t going to be any government pensions to pay for them; something you’d know and understand, had you been forwarding useful articles like those on Capitalist Exploits and of course you’d have done something about, instead of forwarding pointless pictures of obese people in mankinis.

The reason people mindlessly forward information around like hyperactive 5-year olds is because they fail to think for themselves. It’s sheer laziness and should be punished harshly for the massive waste of time that it brings down on everyone that is unfortunate enough to be on the receiving end of it.

I vote for the digital death penalty and I’ve instituted it myself already. In all seriousness, you have no idea how much they are suffocating you until you rid yourself of them.

If you’re one of those people who does this. Here is a cure.

With every single email sent, article forwarded, or text message sent, make sure you know what is being stated cold.

If you can’t think through the entire process then you’ve not given due consideration to the person whose time you’re about to encroach on and you should be beaten with a stick.

Do this and you’ll find that your speed and quality of decision making will be greatly enhanced. And because it takes time to think through these processes you’ll be far more discerning about how you spend your time in future.

One of the reasons people forward useless information around is because they are multi tasking – checking their Twitter feed, writing a report, and clicking on every email that pops up on their screen. Multi tasking is bullshit. At its core is a failure to concentrate and in order to concentrate we need to slow down, engage and be deliberate, thoughtful, and logical.

So when you’re tempted to engage in today’s default of rapid fire, shoot first, think later trigger responses and forward a workmate some article, which on the face of it seems harmless but upon reflection provides zero benefit to either you or your workmate, realize that you’re destroying value. You’re actively pushing two parties further and further away from making productive decisions.

And so in conclusion. Think hard about it and then share this email with anyone that could use it and let me know your thoughts in the comments section below. I’m not alone on this, am I?

“Remember that your goal is to find the best answer; not to give the best one you have.” — Ray Dalio

Chris has founded and built several multi-million dollar businesses in the investment arena including overseeing the deployment of over $30m into Venture Capital opportunities and advising family offices internationally. Prior to this, Chris built a career at Invesco Asset Management, Lehman Brothers, JPMChase, & Robert Flemings.
MORE ARTICLES »
PrevPreviousWorld Out Of Whack: Pokemon Go
NextRaoul Pal: “The Era Of Doing Nothing And Getting Paid For It Is Over”Next