World Out Of Whack: South Africa To Crack Up? 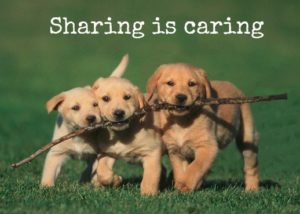 Awwww! It’s true, though, provided what is shared is useful.

A fellow subscriber to the Capitalist Exploits community who asked to remain anonymous is a macro strategist with a strong interest in South Africa.

After my article on that clown Mugabe and subsequently on South Africa mean reverting to the rest of the dark continent he reached out to me and shared something interesting, which I in turn will share with you. But first…

I grew up gawping at maps of the world. Weird huh!

The biggest part of adventure is always the unknown and when I was 10 or so I didn’t know a whole lot about those different coloured blotches on the map.

By the time I packed my bags…(actually just one bag) and set out to experience my own adventures at the age of 18, a bunch of those blotches on the maps had already changed their shapes. My “old” map was probably from the 80’s. Macau was still administered by Portugal. And there was British Honduras, Hong Kong still administered by our tea-drinking friends, and Sudan was one place (no South Sudan).

In fact, looking at it now in the 50’s there were only 95 countries in the world. Today there are about 196. I say “about” because some like Taiwan aren’t recognised by certain countries but are by others.

The point is this. We’ve been moving consistently towards more decentralisation – a topic I covered recently when discussing the coming financial disruption and again when talking about how the economics of warfare have evolved. That same trend is in full swing in political systems.

Here’s just a sampling of the secession movements underway today:

You can check out an entire squadron of secession movements globally at Wikipedia.

And so when the trend is your friend, betting on additional countries breaking up isn’t loony talk. It’s more probable than most would think: 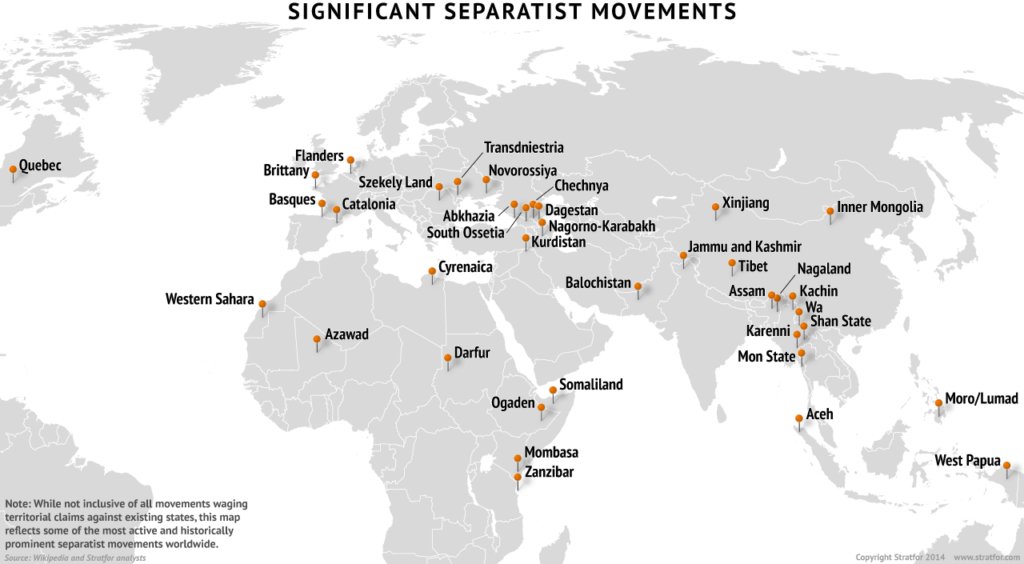 And Now… As Promised

Here is the essence of the secession thesis for western SA.

First, here is the simplistic vision of western SA secession that misleads people into dismissing the idea.

South Africa is failing. The Western Cape is run by the competent DA.

People are ‘semigrating’ to the Western Cape.

Powerful political and business interests will begin to form a secession movement.

The DA will lead a secession government in a dramatic political breakaway referendum.

The version above is unrealistic, politically infeasible and most importantly too fast.

The white tribe of Africa is a politically vulnerable and culturally persecuted, yet economically powerful, ethnic minority.

Emigration is a dispersed, individual survival strategy used by whites since the 1980s, but there are numerous marginal factors limiting further emigration. These are:

– Many remaining whites are less internationally mobile (lacking passports, skills, or the means to move)

– Offshore options are limited to (effectively) the Anglosphere which has cost-of-living and lifestyle tradeoffs that many white South Africans aren’t yet prepared to make. Offshore economies have numerous challenges of their own, like terrorism, asset bubbles, zero growth, unsustainable welfare, war risk etc.

For the above reasons, the ‘semigration’ trend from eastern to western SA is very hot and well under way. Internal data suggests this has ramped up significantly in the past 2-3 years. It is the relatively low-cost way to physically escape some degree of political marginalisation in eastern SA and move to what feels like a friendlier and more advanced country.

Secession thought of as a discrete political/geopolitical event is conceptually implausible in SA, but thought of as a step-by-step, cultural process over time, it becomes far more conceptually plausible. In SA, white South Africans are far down the track of mental secession. The next massive trend is semigration or ‘spatial secession’.

Once more and more people and capital congregate in the Western Cape, provincial political dynamics will begin to shift and agitate, not for secession, but for greater provincial autonomy, more national functions devolved to provincial/municipal level etc. The ruling national govt will deny this autonomy due to tax and realpolitik reasons, causing growing/festering political grievance in the WC.

If South Africa as a unitary entity fails and the currency craters, the geographic grievances will begin to escalate and accelerate, and WC politics will take on a quasi-autonomous characteristic. Local grievance parties that promise local voters greater autonomy will begin win votes.

The economic crisis in SA will become so acute that WC politics will leap into secession politics as an existential imperative, agitating for a referendum. During this whole process, I see whites coming under increasing political and security threat in eastern SA.

Whereas white Zimbabweans moved overwhelmingly to SA from 1980-now (some to UK, Oz, NZ, US of course), white South Africans do not have such an easy escape hatch. The escape hatch is either emigration or political self-determination in a new African state.

Eventually secession will be regarded by all major political groups as win-win. Whites and Coloureds tend to occupy their most historically legitimate region (Western and Northern Cape), and blacks tend to occupy the rest (blacks would be a large ethnic minority in WC). The black political elite will see it as a welcome defeat of expansionary ‘Great-Trek-Gold-Rush’ colonialism. Whites will have fortified their own African state.

I see this as a 15-30 year process. Obviously not inevitable, but you have ingredients for secession that Catalonia and Scotland simply do not have. You have a highly vulnerable ethnic minority group, but it is economically strong and internally mobile. Whites will not be able to tolerate isolated enclave living for long before moving to the Western Cape and joining a growing white community becomes a no-brainer. In addition, you have distinct ethnic groups (whites and coloureds) with a 400 year + historical settlement claim in western South Africa. In essence, this comes down to pure geo-ethnic survival which is what really lends the idea its power and again something the likes of Catalonia does not have.

Of course there are risks to this view. If the ANC is able to de-federalise and then control the Western Cape politically and turn it into an indistinguishable province from the rest of SA, this would be a major countervailing force. Also, since the secession movement could be easily tainted as racist (as opposed to legitimate ethnic self-determination), it could struggle to obtain the requisite international support it might need, even though ironically the “Cape Republic” would be more racially/ethnically diverse than eastern SA.

One thing I know for sure: The maps my kids are looking at today won’t be the same maps their kids look at.

Figuring out even just some of these pieces ahead of the hoi polloi and positioning to take advantage of such changes has in the past led to fantastic profits. The future is likely to be similar.

I can’t do a poll on this. It’s broader than Jabba the Hutt.

What area or region in your opinion has the highest probability of secession in the world today?

Let it rip in the comments section below.

“Own only what you can always carry with you: know languages, know countries, know people. Let your memory be your travel bag.” — Aleksandr Solzhenitsyn

Chris has founded and built several multi-million dollar businesses in the investment arena including overseeing the deployment of over $30m into Venture Capital opportunities and advising family offices internationally. Prior to this, Chris built a career at Invesco Asset Management, Lehman Brothers, JPMChase, & Robert Flemings.
MORE ARTICLES »
PrevPreviousInsider Weekly: Echoes Of The Dot-Com Bubble
NextWhere Snowden Failed, THIS Won’tNext