The Power of Shut Up!

Sitting with my lovely wife recently in a hospital waiting room (don’t ask) flicking through magazines, she showed me a picture of an elderly woman, a famous celebrity.

Now, let me say that I care for celebrities and follow their movements in the same way I care for and follow the mating habits of the long-beaked echidna – not at all. Gratefully, my wife is the same. What was interesting about this celebrity was how young she looked.

Medical advancements have already done wonders, and if even a tenth of the types of medical technologies we’ve seen young companies working on come to fruition, we’re in for an amazing future.

With respect to this particular celebrity my wife showed me, I’ll give a little credit to Photoshop but certainly, after the inevitable ravaging of breasts (babies and gravity do that), there had definitely been some re-upholstery work done, probably some vacuuming of bits here and there, and a smattering of collagen injections. These are the visible cosmetics, all products developed by amazing entrepreneurs.

What photos of old woman with bouncy breasts and puffy lips don’t show are the non-cosmetic medical advancements. Bio-engineered blood vessels, medical molecules, 3D printed organs and face replacement technology to name a few. These amazing technologies are of course a godsend to us all including middle aged women of the world who aspire to age like Joan Collins. Faced with the realisation they’re plummeting uncontrollably towards a gravity assisted osteoporotic, glaucoma-ravaged death, they have so many ways of looking and feeling much better than their ancestors.

Possibly THE most inspiring thing about working with entrepreneurs is engaging with those who are doing truly revolutionary things and building life-changing technologies.

It doesn’t always culminate in our investing in them, as simply investing in big ideas is a road to the poor house, but I am reminded of the fact that it takes a special kind of person to conceive of, invent and build life changing products.

What comes with this is often ridicule and skepticism. Those who have come before have certainly had to deal with their fare share of this. Let’s take a look at some of the skepticism and ridicule from our past.

“The abolishment of pain in surgery is a chimera. It is absurd to go on seeking it…Knife and pain are two words in surgery that must forever be associated in the consciousness of the patient.”

Thank goodness for Dr. Alfred who, while publicly said the above, never gave up in his quest and is now known as the man who invented anesthesia. 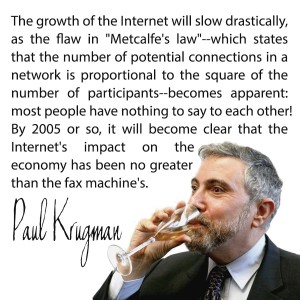 Now, since life is all about balance and Dr. Alfred was indeed a genius, I felt it only fair to balance things out and share with you a true blockhead. I acknowledge that it’s not fair to pick on Kruggie as it’s like shooting fish in a barrel but I couldn’t resist.

“Rail travel at high speed is not possible because passengers, unable to breathe, would die of asphyxia.”

What? When he sped downhill on a bicycle, did he find there was less oxygen around him?

“[Television] won’t be able to hold on to any market it captures after the first six months. People will soon get tired of staring at a plywood box every night.”

This made me think of everyday entrepreneurs looking to do something. Maybe not world-changing but doing something they’re passionate about. Unless they’re in an environment that encourages the entrepreneur mentality they will no doubt face naysayers. Some tips then which have both helped me and many of the entrepreneurs I’ve worked with.

As Mahatma Gandhi famously put it, first they ignore you, then they laugh at you, then they fight you, and then you win. – Chris “History shows us that the people who end up changing the world – the great political, social, scientific, technological, artistic, even sports revolutionaries – are always nuts, until they are right, and then they are geniuses.” – John Eliot

Chris has founded and built several multi-million dollar businesses in the investment arena including overseeing the deployment of over $30m into Venture Capital opportunities and advising family offices internationally. Prior to this, Chris built a career at Invesco Asset Management, Lehman Brothers, JPMChase, & Robert Flemings.
MORE ARTICLES »
PrevPrevious9 Charts to Meditate On
NextAnd the Bloodletting Begins…Next

Chris you’re on a roll recently, thanks for this inspirational entrepreneur pep talk!

As a serial entrepreneur, now working towards the most exciting venture yet – and well into my 50’s, it is still difficult to go around people to reach the goal. Especially when they are smart, curious, successful – but unable to recognize paradigm shifts and fearful of leaving the status quo. It requires a certain insensitivity, especially when they are friends who you can tell – get it – but are unable to make the jump.

Good luck down in Columbia!.

Hi Peter,
Absolutely. Wish you were joining us. Keep your head down and your bum up!