This Man Is A Moron

Then maybe you missed our earlier post this week about success… and what that might mean to you.

While on the topic here’s another way to cure depression…

Book her a secret weekend away in luxury… just don’t tell her you paid a pittance. You’re welcome!

We had only 3 months to wait. In a blog post about the dollar being a collapsing star from back in May we noted the following:

When the pointy-shoed crowd realise they’re “overweight” EM and EM currencies, the selling will be indiscriminate, which will set off the algos programmed to sell anything exhibiting volatility beyond some predetermined metric. And as those circuit breakers trigger there won’t be enough dollars to meet demand.

It feels like right now we’ve a perfect setup for what nobody expects: a much, much higher dollar.

It was deeply unpopular at the time, which is often a good sign you’re on the right track.

And here we are. The US Dollar Index (DXY):

This is a BIG deal. I don’t want to scare you but it may be worth freaking out now. Or maybe I’m wrong. Time will tell.

I think that’s what we should call the “coming to cinemas near you blockbuster story behind the largest corporate fraud in history”. Can I trademark that?

This week, Elon admitted to securities fraud in a blog on the Tesla website. Check it out here if you like.

Then we had this from a lass I’d never heard of. One Azealia Banks… a rapper (some people call that music, though I’m unsure why). 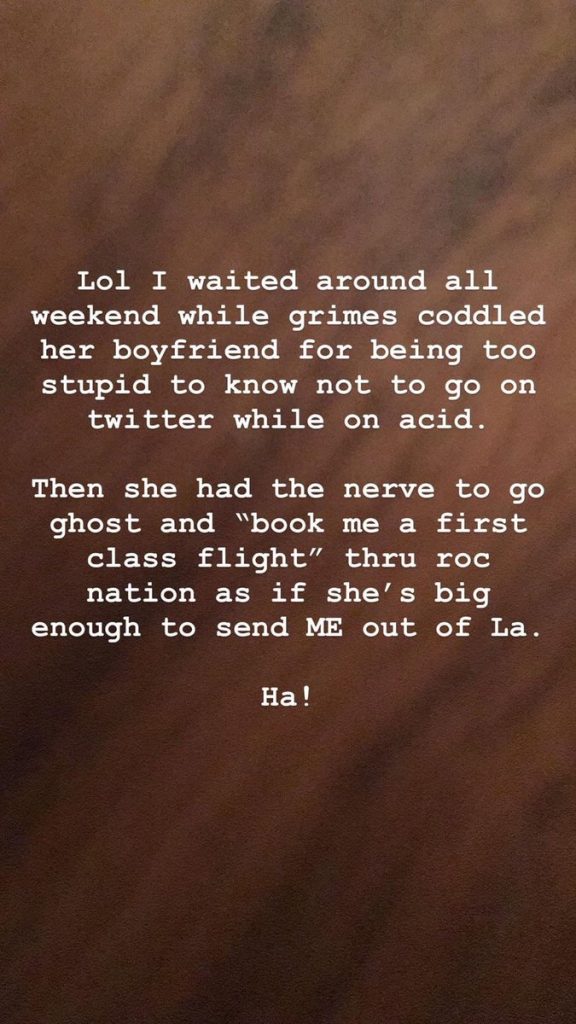 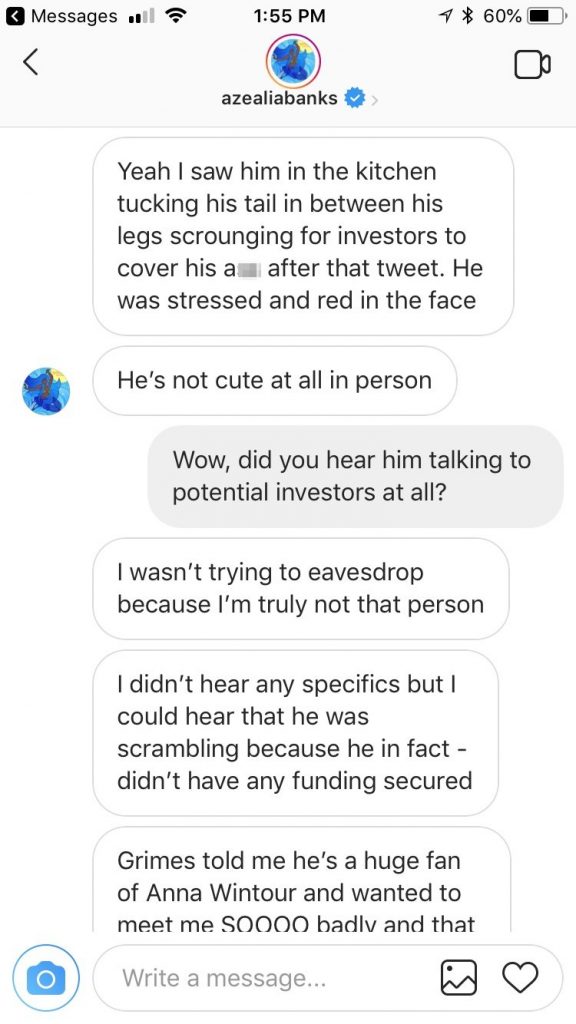 Far as I can tell she’s as crazy as a bag full of monkeys, though this house of cards (Tesla) will fall with our without some crazy rapper telling us Musk’s high on acid tweeting about funding.

And if that wasn’t enough for you, it was followed by this.

I’m excited to work with Silver Lake and Goldman Sachs as financial advisors, plus Wachtell, Lipton, Rosen & Katz and Munger, Tolles & Olson as legal advisors, on the proposal to take Tesla private

And in a truly amusing turn of events Silver Lakes response was “hell f&*^ing no, we’re not.”

Followed by Goldman, who then clarified that they, in fact, had no mandate. Oy vey! A wee bit embarrassing really.

Oh, what a tangled web we weave, when we act to deceive… 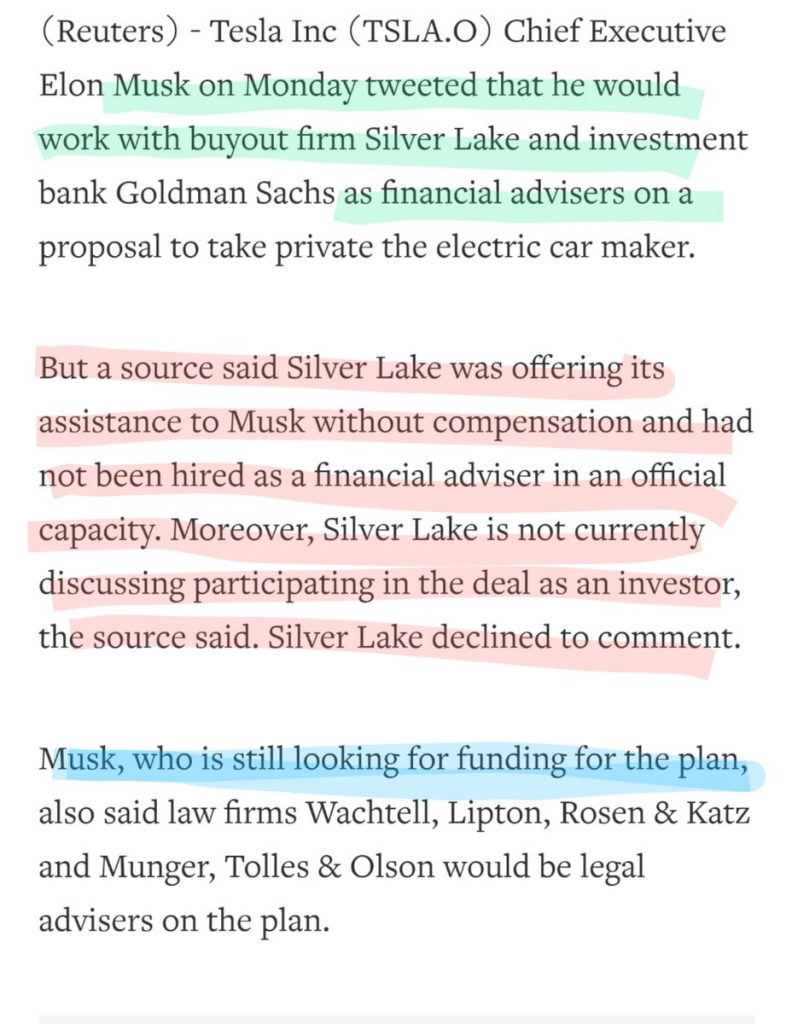 On second thoughts, Silver Lake makes perfect sense. In a bankruptcy they’re exactly who you’d hire. Take a look. Bankruptcies are right up their ally. 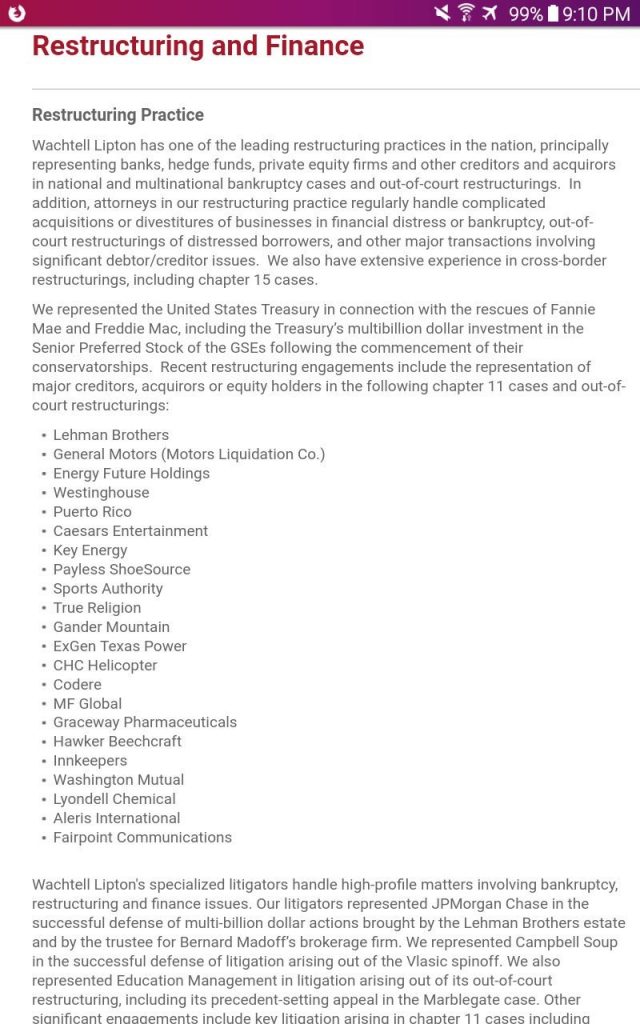 Musk suggested that existing shareholders would come along for the ride in an SPV. Ok, I know, I know… retail are stupid and get fleeced all the time, but come on.

It’s clear to me that most retail investors, shareholders in this fustercluk of a fraud, don’t understand that they cannot by law participate in a “private SPV” owning shares in Tesla unless they meet the accredited status requirements for such a deal.  Elon knows this too… unless he was tripping on acid and simply forgot about it.

But what they don’t know won’t hurt them. Until, of course, it does, which, as night follows day, is coming.

Musk’s clearly not transparent with his own board. But hey, who could have seen that one coming?

Well, actually we shorts did. 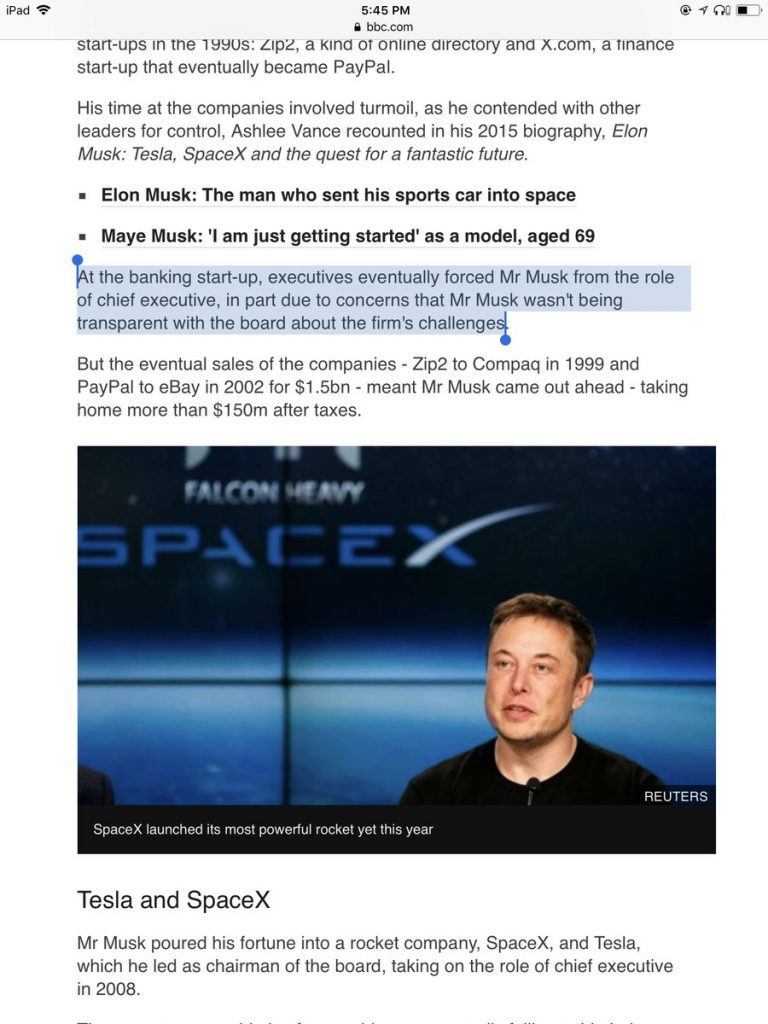 Imagine for a minute, if you will, a business where you over charged your clients and then turned your clients into a product itself. It’s Facebook meets reality TV. And where you, the product, have the world staring at you from every angle as you grunt, sweat, and fart. Nice! 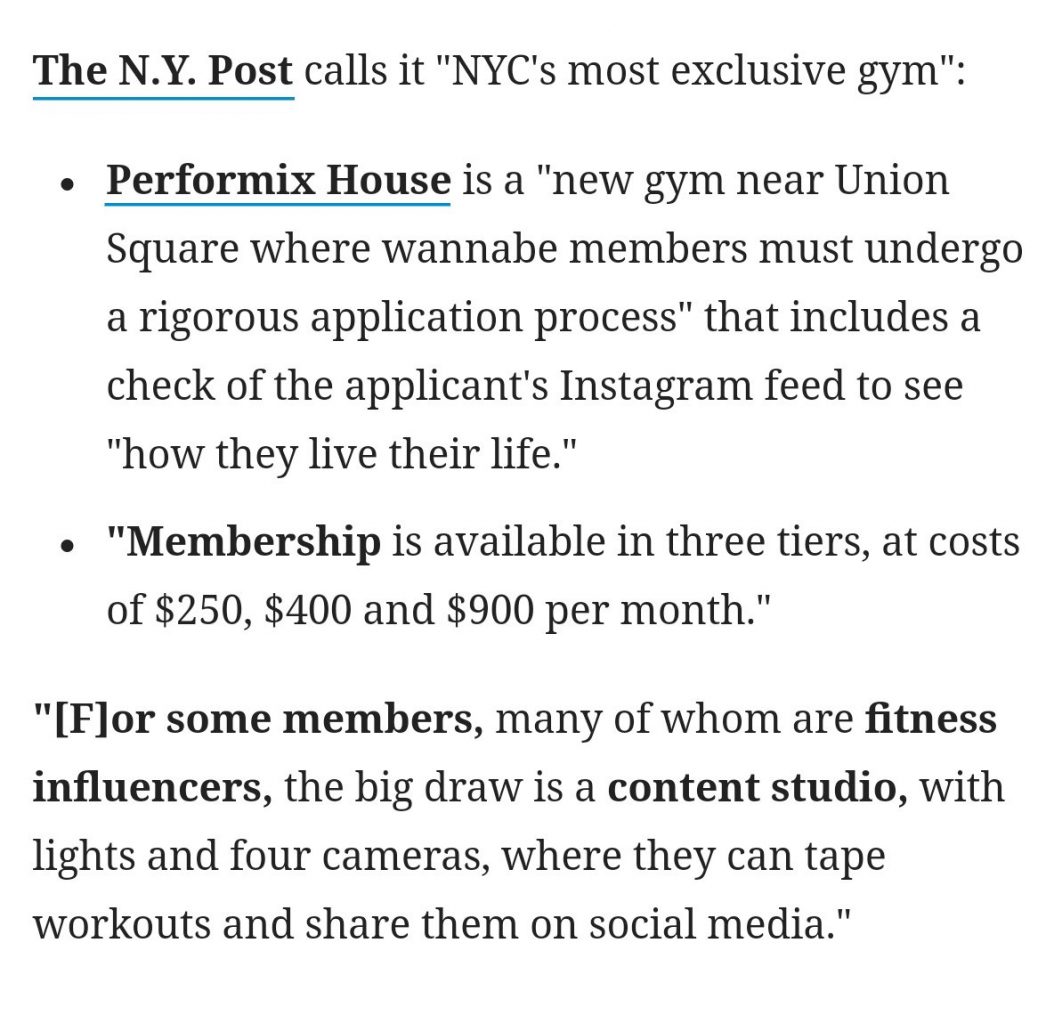 I pity the utter morons who sign up for this. Though, no doubt there will be a steady stream of soy-latte sipping, woke, incels-in-training who will be like, “oh my gawd, did you see me on the Insta feed, girrrl?” And they will love it. In this day and age it’s actually a good business model.

This Man is a Moron

London just had another terrorist attack. But fear not London’s  mayor has a solution.

I’ve got an idea for you Sadiq. Ban muslim extremists… and stop pretending it’s not them that are the ones going around burning, looting, raping, and murdering.

Payback is a Bitch

You may not remember it, but I wrote about the carry trade here a few years ago. It applies today to the vast amount of dollars that have been borrowed and in turn invested into non-dollar denominated assets. Turkish assets mentioned earlier in this piece are presently at the most extreme end of this unwind.

I promised it in an article that explains why we’re where we’re at today… and what’s to come. Here’s EM debt denominated in greenbacks: 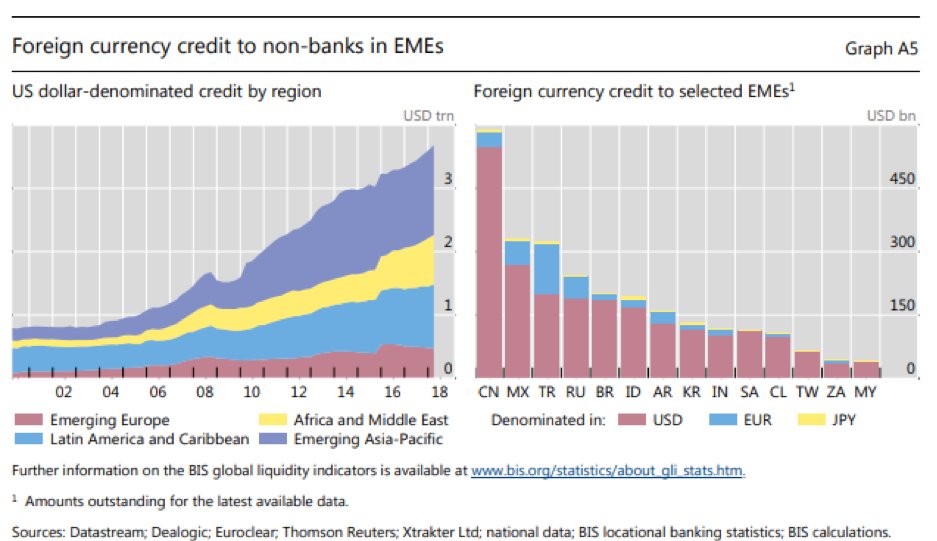 Recall, if you will, the GFC and how the FED put their foot to the floor, pumping liquidity (dollars) into the marketplace. That made dollars cheap and plentiful. It also led EM’s to borrow in dollars extensively. I know, I know… no foresight. But hey, it’s not like they would risk a repeat of the 1997 Asian crisis, right? Riiight?

The higher the dollar goes the worse this gets, creating a self-reinforcing feedback loop punching the dollar higher…much higher. There is more to it…much more but I’m outta time and I don’t want to keep you too long.

Until next week, thanks for reading and please share the love.