I’ve been absent for a few weeks and for that I make no apology. The recently concluded New Zealand meet up over the last few weeks left me with little time for luxuries such as sitting down to jot out some thoughts to you. Hopefully, when I do get something out it’s worth your while. It certainly helps me crystallize thoughts which is a tangential benefit to what began as a hobby some 4 years ago now.

The heading I’ve chosen today is, I think, apt for the market environment we find ourselves in. Certainly there are a lot of chaotic events taking place today. I’m not just talking about Yemen or Syria and ISIS, but extremely tenuous situations fiscally throughout Europe, China and Japan to name a few. I name these in particular because they’re the largest players in this game, and what happens in these countries has global, meteor striking earth, impact potential.

This was one of the themes at the meet up. I can’t possibly cover even a fraction of what was discussed so I’ll throw in a few key takeaways instead.

From discussions with attendees at the event it was evident that although we’re in a bull market in equities few believe it’s a “real” market. We have the world’s first “unreal” bull market. It’s a strange creature, the birth-child of massive global interventionist central bank policy combined with global interventionist “snatch and grab” government policies such as FATCA, which is incidentally destroying the world economy.

This piece of legislature has to be the most destructive economic event since the black death in 1665. The plague started in the East, possibly China, quickly spread through Europe, wiping out 15% of the English population along the way.

Today FATCA started in the West and has spread globally infecting every major financial institution in its path. It has likely already killed more than 15% of global business as many market participants have shut their doors to any business which carries this risk. American citizens have become pariahs on a world stage. The risk of non-compliance is not something many can withstand financially. The true cost will never be known, but that loud sucking sound you hear every day is the sound of capital coming OUT of the system. This is but one reason why no matter the amount of quantitative easing and bailouts inflicted on the economy, deflation is the stronger force.

This is something we’re seeing taking place with some regularity now, whereas a year ago central banks were all singing the same song. Major central banks seem to be diverging from the “until death do us part” mantra. With a system so incredibly fragile we’re betting on some serious financial shocks to the system. Namely, a historic USD rally as we’ve detailed extensively in this report. Global capital is flowing out of emerging markets, largely fueled by the unwinding of the USD carry trade.

There are no easy answers. We have our guesses and so far we’ve been correct. The USD is the place to be as “risk off” gathers steam. As such we’re staring down the barrel of deflation. The concept of risk has been massively skewed leaving asymmetric opportunities which Brad discussed.

Nowhere is economic policy divergence more strained than in Europe, Greece specifically. Grant Williams, who graciously spent the better part of the week with us, discussed how large a problem Greece actually is and why watching Greece now is really important.

While none of us know what will happen for sure we do note that that which is unsustainable will not be sustained. Greece has some key dates coming up which are worth watching. I nicked the below infographic from Bloomberg. It shows us a number of straws, any of which could break the camel’s back.

Buying sovereign debt right now is a supremely risky proposition, especially given the reward offered. Buying government bonds is the first commandment of the mutual fund manager classes, way above “thou shalt not kill” and “thou shalt not charge less than 2 and 20”. The broad market has yet to acknowledge that governments are broke and fiscal policy in the hands of central bankers has been shown to be about as sophisticated as a Russian hammer.

Massive misallocations of capital stare at us like wild caged animals through the bars of a cage in the zoo. The zoo keepers are absent, irresponsible, have been poking the animals, aggravating them and the cages are getting old. When they give way, I don’t know but I don’t want to be around to find out. Holding leveraged assets where debt is floating or cannot be fixed for the duration of the cash-flows from the asset, impresses us as foolish in this environment.

Going back to our meet up – after hearing from a host of companies in our due diligence pipeline, as well as some that are in our portfolio, we enjoyed a wine tour on Waiheke island and then headed down to the absolutely stunning Queenstown. For those of you who’ve never been – Queenstown is quite simply breathtaking. A picture postcard every which way you care to turn. It is fast becoming home to the rich and famous seeking a safe, stable, beautiful location bursting with activities all year round.

We took our members to look at a portfolio companies ambitious plans to acquire a high country block of land sitting at the head of a lake, complete with airstrip, lodge, house and various other utility buildings. We were then treated to a helicopter flight up river to the head of a glacier, below which was this pool. 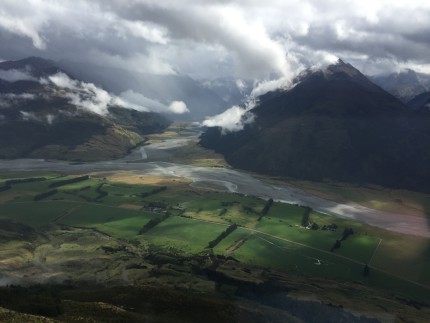 There are worse things than having a bug out pad in a first world, stable, wealthy, friendly, English speaking, largely empty country.

“No structure, even an artificial one, enjoys the process of entropy. It is the ultimate fate of everything, and everything resists it.” – Philip K. Dick

Chris has founded and built several multi-million dollar businesses in the investment arena including overseeing the deployment of over $30m into Venture Capital opportunities and advising family offices internationally. Prior to this, Chris built a career at Invesco Asset Management, Lehman Brothers, JPMChase, & Robert Flemings.
MORE ARTICLES »
PrevPreviousIs This How It All Begins to Unravel?
NextMongolia – Is This Guy for Real?Next

Sorry to have missed this.

Yep, Full Faith and Credit in the Empire of Chaos! It seems it is all just resting on confidence now, and the central planners have their psyops teams at the helm overseeing all the manipulations and pronouncements. Must keep the herd from spooking even if there are hungry and aggravated predators testing the fences……But there is “safety” in numbers so the artificially expanded piles of liquidity stream into the USD corrals. Time is limited for selling off the flock at exaggerated market prices before the fences give way – probably all at once – and the herd is decimated and the vultures begin to pick at the bones……

Gotta think at that point in time the folks who own REAL assets in safe jurisdictions – with perhaps some PM’s somewhere that can be fed to ones OWN vultures – will be the few that saw it coming, accepted the “unreal” as reality and prepared for it. Their families and their legacies should likely be saved because of that. Maybe in Queenstown!