Getting Paid for Doing the Obvious?

A not so startling realization is that running uphill burns more calories, is more taxing on your body, makes you breathe harder, and will make you tired faster than running on a flat or downhill. Running downhill is easier and less taxing on your body. Consequently only protein bar munching fitness nuts, and criminals escaping the scene of a crime, willingly and gleefully run uphill. The rest of us enjoy it when the decline hits.

When you trade a currency pair what you’re doing is borrowing one currency in order to buy another But as a trader you don’t care for taking settlement. What you’re concerned about is profiting from the change in exchange rates. Since you’re borrowing one currency it stands to reason that you’ll be paying interest on your borrowed currency (short position), and consequently, since you’re buying another, you’ll be receiving interest on the bought currency (long position).

This particular paying and receiving of interest is commonly referred to as rollover. At day’s end all accounts are settled and if you don’t wish to pay or receive interest then you need to close out your trade before day’s end.

Here is the important bit to understand…

When you’re borrowing a currency which enjoys a lower yield than the currency which you’re buying then you get paid the difference at the end of every day. A good thing from a cashflow perspective.

If, on the other hand, you’re the other way around, you pay the difference. The problem, as with life in general, is that there is typically no free lunch. More often than not the best risk reward trade setups leave us paying, not receiving interest on a cross pair. You don’t want to be the guy who thought he was going for a nice gentle downhill run only to find you’re running up the steepest and longest hill you’ve ever come across, ensuring that you will absolutely puke along the way.

What is typical is that the currency which is weakening simultaneously enjoys a higher yield than the one which it is weakening against. This makes sense since the risk to holding the currency is higher and higher risk, ceteris paribus, should mean higher reward.

For instance, long US dollar and short Chinese yuan means that the spread works against you. You’ll be paying the difference between yields not receiving it.

Below is a chart, taken from Interactive Brokers, with the rates. Bear in mind these change all the time and differ from broker to broker but the principle is important to understand.

The attentive amongst you will notice a wonderful anomaly. Long USD/JPY pays you to hold this position while the yen is weakening. It’s the Holy Grail of cross pairs. The reason here is that the BoJ can hold the bond market together and keep yields very low and ironically massively devalue the yen at the same time. We’ve been in this trade for a long long time now and it’s paid us handsomely not only since the yen has lost so much value against the dollar but also because of the positive carry aspect.

The reason I talk about these little nuances is that it’s important for me to be positioned the best possible way at all times and if that’s true for me, it’s likely true for you too. This all becomes important as we stand today on the precipice of an emerging market liquidation – something I’ve written about here and here. 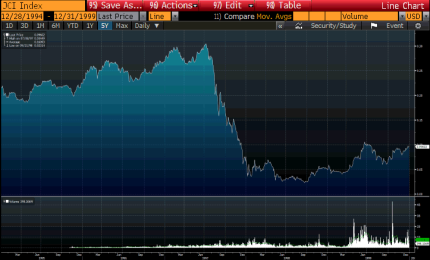 Just for some historical context consider Indonesia which went down 95% in dollar terms in a little over a year! Korea, hardly a basket case country itself, collapsed 90% in the same time frame. Liquidity just evaporated from the market. I’m not sure investors today get it.

We’re there again. Liquidity is drying up and we think that we’re on the brink of liquidity collapsing, resulting in some gloriously curvy wavy charts like the one above. How long? I think we’ve already tipped over, we’re in it… just the very early stage. The next stage is the waterfall, the rapid “oh my God, how did that happen?” stage.

Where and What Blows Up?

Some great work done by CreditSights reveals where risk lies: 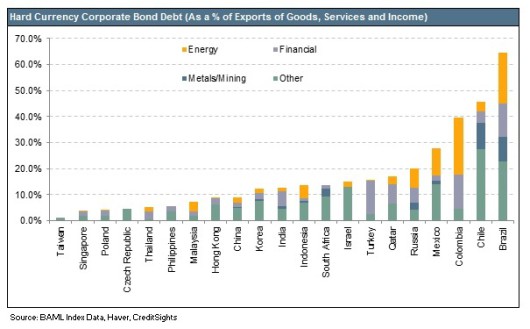 Brazil is already being punished, Chile has ways to go as does Colombia. Heck, put into context of how enormous this carry trade is, I think they’ve hardly moved yet. 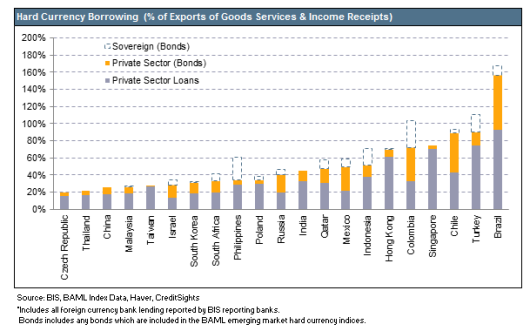 I think we’ll also get trouble in energy. We’re already seeing it in shale and next week I’ve got something special to share with you on that topic as it’s timely. I also think we’ll see it in emerging market equities in a big way. Emerging market corporate debt looks even worse.

Understanding the opportunity is one thing, though.

I know plenty very very smart PhDs but the one thing that no longer surprises me, but did for a long time, was how few of them were rich. They’re the equivalent of the geek in the bar who can identify the hottest girl because he has studied every possible feature of every single girl in the room but you know he’s still going home alone because he hasn’t gotten off his behind to talk to any of them and see how they actually work.

Understanding how to execute on an opportunity is a different mindset! It requires a tolerance for risk, a belief in your own analysis, a backing of yourself, and it requires action.

We detailed in our complimentary USD Bull Report what was going to happen in this market. It’s happening now and the big move lies just over the horizon. Or we’re wrong. How about we let the market show us?

Have a good weekend and as mentioned, next week I’ve got a treat for you regarding the energy sector that I think you’ll find fascinating.

“Ideas are easy. It’s the execution of ideas that really separates the sheep from the goats.” – Sue Graft

Chris has founded and built several multi-million dollar businesses in the investment arena including overseeing the deployment of over $30m into Venture Capital opportunities and advising family offices internationally. Prior to this, Chris built a career at Invesco Asset Management, Lehman Brothers, JPMChase, & Robert Flemings.
MORE ARTICLES »
PrevPreviousThe Power of Distribution Manifested by Coca Cola
NextLetters From a Hedge Fund Manager – Part INext

Hi Chris,
Great post as usual. I’ve been following you for some time now, and think your investment philosophies on capital movements are spot on. Few questions for you:

-What are some things you think could disrupt the deflationary effects on the dollar and jeopardize potential gains from investing in pairs based on the carry trade unwinding?
-For Americans, where can we find a brokerage to make these trades? Where does the rest of the world place theirs (assuming one is not a US citizen)?
-I think China will be forced to devalue the Yuan again…you agree?

Hi and thanks for the kind words.
– What could disrupt the deflationary forces? Another massive round of US QE. Right now on a relative basis it’s the other way around as other countries are conducting their own QE but QE in non reserve currency countries is NOT the same as QE in the US. Many don’t seem to understand this important point. Such a monetary injection would need to overwhelm the effects of the carry trade unwinding but remember it would also have to overwhelm the pricing of commodities. I don’t think it’s likely but in theory could happen.
– If you’re trying to short the yuan and you’re an American, you’re kinda out of luck. Saxo offer the offshore remnimbi.
– Yes, agree. No way is this the first move. If you look on a relative basis it’s still really overvalued. I think we see 6.8 within 12-18 months. That’s on the low side.

Thanks Chris for sharing your thoughts on how to execute this structural trade well. Seeing where CHF funding rates are at the moment and the fact the currency has been very strong for various reasons, do you see an opportunity for a generational trade similar to the one on the Yen?

Author
Chris MacIntosh
Reply to  ME

In risk off, which is where we’re at, I don’t want to be short the Swissie. Volatility isn’t sufficiently low on the crosses with CHF to warrant anything right now in my opinion.