Myanmar – In the Mix

(China, Missionaries, Methamphetamine and the CIA)

As is often the case when investing in Frontier markets it is important to get a grip on what has come before, the current reality and what to be scared s*#tless of.

We’ve found that it is typically the unseen risks that pose the greatest danger to our capital. Spotting frauds, scams and poorly-run companies marketed by slick-suited and booted IB’s and IR firms are rarely a problem, and typically a source of great amusement (yeah, sometimes we’re not making any friends).

As such we focus on eliminating these risks wherever possible. I dedicated an entire post to this subject in 1 Simple Step to Becoming a Better Investor.

I’d like to share some macro perspectives and the risks as I see them regarding Myanmar. Writing it down helps crystallize my thinking.

Sanctions have managed to keep many countries out of the Burmese playpen, while others have become heavily entrenched, building long-term relationships and inroads into the country.

Two of the major players in this Asian pariah-turned-rock-star have been China and Thailand. Chinese Foreign Direct Investment (FDI) accounts for over half of the total FDI the country has received, and China has had a near monopoly with major infrastructure projects in Myanmar. 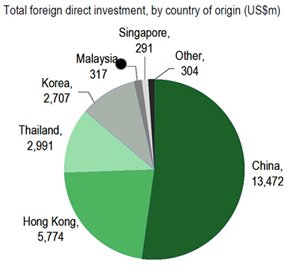 The chart above shows this pattern clearly. Hong Kong is an anomaly since it represents multiple countries really, which are simply based or incorporated in Hong Kong. Many of those are likely Chinese.

Speaking with people far more knowledgeable than I, what seems to be clear is that while China has spent gobs of money in the country, the relationship has not always been pleasurable.

The abrupt suspension of the Myitsone Dam project, where China spent $3.6 billion…not a trivial sum, highlights this point. The key to the fractured relationship appears to be the large disconnect between the average Burmese and the beneficiaries of these projects…namely Chinese businessman and Burma’s generals…ah, I mean politicians. 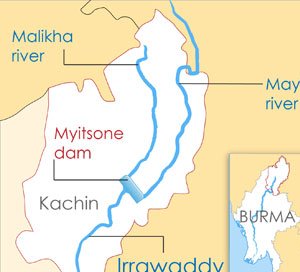 The building of dams, the Myitsone dam in particular, which is the largest of many being built on the Irriwaddy river in Kachin State has displaced villagers, flooded productive agricultural land used to sustain the livelihoods of hundreds of thousands and caused animosity towards the above-mentioned beneficiaries of these projects.

Flattening peoples homes, flooding their food source and shooting them when they get titchy is a spectacular way to generate ill will. You can do this when you have a brutal military regime running the place who care what the populace think in the same way I care about Justin Bieber’s latest smash hit…not so much!

The problem is that the generals are selling the world on reform, “Hey, we’re a democracy now!” A story entirely inconsistent with (continually) running roughshod over your own people.

As I alluded to in my previous post Myanmar, Hillary, God and Muhammed there will be difficulties employing democracy, or even smatterings of it while opening up economically. In fact, it is almost a certainty that the euphoria with which Western governments have been heaping praise on the Thein Sein government is premature.

The fighting and repression in the north of the country (where a HUGE amount of the world’s illegal drugs originate, especially methamphetamine), is as violent and inflamed as ever.

Side note: It’s likely not a coincidence that the CIA has such a large presence in Chiang Mai, Thailand. The place is littered with CIA operatives, together with American Christian missionaries involved in one way or another in northern Thailand and Myanmar.

I would prefer not to go into too much detail on this particular aspect of geopolitics, but will say simply that it is “interesting” that the two, CIA and Christian missionaries, throughout American history have often been present hand-in-hand. I will leave readers to ponder that fact and draw their own conclusions.

In any case, it is NO coincidence that this northern region is known to be arguably THE most resource rich in all of Myanmar. Jade, gold, teak and much more.

The region is also the direct conduit geographically for China’s access to Burmese ports, which make it arguably THE most strategic state in Myanmar, for both the Chinese as well as the Burmese government. At the same time it is a state filled with Christian Kachins fighting for independence against the predominantly Buddhist Burmese military.

I wonder whether the power brokers in Naypyitaw have full control over the military up north..?

Frankly I don’t know, but what I do know is that the exploitation of resources and the drug money in this region are substantial and there are many who are benefiting handsomely from the status quo. Losing these benefits is not a particularly palatable option for them. I also know that billions of dollars of Chinese-financed energy projects were contracted with the former military regime.

Chinese SOE’s have a vested interest in getting their pipelines built through territory controlled by the Kachin people. Executions of innocent women and children continue to this day. Refugees in Northern Thailand I spoke with have little reason to lie about these things. These facts are largely ignored by anyone visiting Naypyitaw. Like I said in my previous post, Naypyitaw, as far as I can tell is specifically designed to keep ignorant foreigners…well, ignorant.

Chinese firms are building strong relationships with the current government, military and far less so with local SME’s. These relationships foster love and mutual goodwill with the local populace in the same way the US army fosters love and goodwill by supporting the Saudi royal family, Gaddafi, Pol Pot, or any number of other “strategic partners”.

With the halting of the Myitsone dam project by President Thein Sein, Chinese reliance on a hard-nosed military government to help steam roll projects has turned around to bite them in the ass, as the government have tentatively sided with their own people.

This must have come as a huge shock to the Chinese, and indeed our sources tell us this is indeed the case.

The Myanmar government suspended this project out of the good of their hearts, fear for the well-being of their citizens and genuine deep affection for their own people. If you believe that I’ve got a bridge to sell you!

No, instead I believe they have simply done the math. Opening the country up to foreign investment and capitalism will make them far richer than they already are. Suspending the project is a necessary step towards showing the world that they are serious about doing what is required to ensure the money comes, and keeps coming from previous sanction-happy countries.

I have to wonder as well whether the Junta…uh, sorry, I mean government are diversifying their political risks by directing investment from multiple partnerships and countries. Not a silly move of course. Who wants to be a subsidiary of China?

The point here is that China has mainly chosen to engage at the bureaucratic level in Burma. While engaging with SMEs has mainly come via their other neighbours to the east.

The approach from Thai companies has been noticeably different. Thai partnerships are to be found throughout SME’s in the country. Integration is noticeable, and I don’t get the impression that these partnerships were unwelcome. Culturally I have been told that the Thais are better positioned to understand their western neighbours than most any other culture in South East Asia. This makes perfect sense.

Singapore and the port?

The Dawei port project signed between Thailand and Myanmar back in 2010 and subsequently awarded to a Thai construction company, once completed will divert a lot of port activity from Singapore. It should come as no surprise that Singapore tried very hard to have the project stopped citing “environmental” concerns.

Even more interesting is that the Singaporean government are instructing the Myanmar government in modernizing their economy. I wonder…is an off-take agreement in place for the port?

What does all this mean for our own investing?

Greenfield opportunities exist in telecoms (Myanmar has the lowest Internet, mobile and telephone penetration in ASEAN…arguably the only untapped market left in Asia), financial services, tourism, agriculture, and of course resource extraction.

The answer to the above question is found in another question: To whom will go the spoils?

While we ruminate on those thoughts, below are various listed plays our astute readers may wish to investigate…

The above is simply a list of existing companies you may wish to look into further. Neither Mark nor I own any of their shares.

We have been looking at a few opportunities in the private equity (PE) space and have found an Oil and Gas company which we will be pulling the trigger on in the next few weeks.

It has all the criteria we wish to see, solid management, attractive capital structure and an early seed valuation.

If you’re an accredited investor and have an interest in private equity and the deals Mark and I are placing our own capital into then we invite you to learn more by clicking here.

On 30 March 2011, in his inaugural address to the Myanmar National Parliament, Thein Sein said: “[…] [E]very citizen has to avoid any activities and speeches that harm the image of the country and interests of the people.”

Chris has founded and built several multi-million dollar businesses in the investment arena including overseeing the deployment of over $30m into Venture Capital opportunities and advising family offices internationally. Prior to this, Chris built a career at Invesco Asset Management, Lehman Brothers, JPMChase, & Robert Flemings.
MORE ARTICLES »
PrevPreviousMyanmar, Hillary, God & Muhammad
NextMongolia – Where Did Everybody Go?Next

My Friend Tim Staermose from Sovereignman.com tells me that another company worth watching is Eumeralla Resources listed in Australia under ticker (EUM). Note I know zilch about the company and am not a shareholder. Do your own DD