I’ve long since argued that democracy isn’t necessary for prosperity. Rather than railing against democracy I merely am making the point that economic liberty is more important to wealth creation than political liberty. It is a market economy that is the key to unlocking wealth.

The reason this is so is because humans are, well, human. 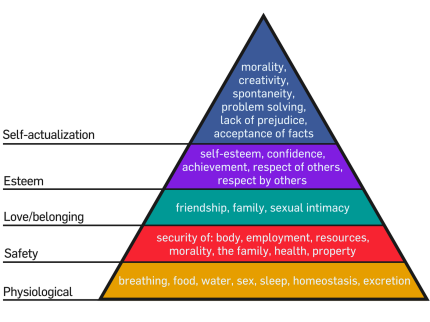 Part of being human involves looking out for our own best interests, and accordingly Maslow’s hierarchy of needs provides a good starting point. Any system that halts the progress of any stage in the above diagram will simultaneously halt wealth creation and any system that assists or allows humans to pursue their own needs, ideas, passions and wants will foster wealth creation.

Over the last 100 years or so Europeans and Americans have been fortunate enough to have been born with their bum in the butter so to speak. They have enjoyed:

This superior status has led to all sorts of ludicrous assumptions being made from those who typically know little of history, geopolitics and economics, which typically includes congress, the Troika and entire swathes of the media fed populace. It is how once great powers wither into the dust bowl of history. The populace blissfully unaware of what has happened, or worse yet believing that something has happened to make their lives miserable which is completely divorced from reality.

The media is so astonishingly powerful over a populace fast asleep and trusting. I present one such example: I still come across people telling me about global warming. Haven’t they heard of climate gate? Haven’t they figured out that Al Gore duped the world? Yes, the ice caps are safe and smiling polar bears are to be found frolicking with their little cubs. Turn the heat up.

Looking at the recent G20 meeting it’s astonishing that an air of superiority remains. You can see it written all over the faces of western leaders: “We do things differently” or “we’re smarter, more sophisticated, it’s in our genes”.

I can see how it happens. I recall the first time I visited the Pyramids in Giza. I thought to myself, how the hell did Egyptians build these amazing buildings when today they clearly can’t put up anything that will last more than a few short years? The place is now falling apart. I’m sure at some point Egyptians were nodding appreciatively to one another over a hooka pipe saying “We’re Egyptian, of course we’re smarter, of course we’re better”.

This is what is happening in the West today.

Try starting up and running a new business in Europe. Heck, I’ve a friend who is simply trying to build a home. When you see the enormous barriers to economic activity you begin to understand how this happens. By the time you’ve complied with the hundreds of asinine laws, hired yourself your tradespeople who typically can only now do very specific jobs, for fear of being caught wiring a plug without the correct license to do so, then it’s not hard to see how Europe is decaying with such breathtaking speed. The punitive tax system together with regulation of staggering magnitude have quenched any entrepreneurship, while concessions for what is left are awarded to large corporations in multiple fields of activities. The ability for small business, which is coincidentally the lifeblood of any and every vibrant economy, is stymied.

The truth as always lies in the facts. The West is in its death throes and we see this in Western powers pressuring Russia or striking out in the Middle East. This is an attempt to remain relevant and establish hegemony. Why this desperation?

These are massive global shifts that are taking place right in front of us. What this looks like in 10, 20 years time is a factor of that which it is today. Within 15 years the Asian middle class alone will make up over 2/3rds of the global middle class. Today it is 1/3rd.

Our friend Doug Casey likes to joke that Europeans are going to be predominantly used as housemaids for the Chinese. When he says it in front of Europeans and Americans they still laugh. They shouldn’t. It’s happening.

Western politicians, as thick as they may be, can see their power ebbing away at every turn and their reaction has been to drive the dagger deeper into their economies increasing regulation, cramping entrepreneurship, raising taxes, taking on obscene debt loads and centralizing rather than decentralizing their economies.

Consider the points 1 through 5 I’ve made above.

The fact is that the West used to be superior to the rest of the world but the competitive advantage has eroded substantially. At the same time emerging economies have embraced the market economy, strengthened judicial systems, enhanced education and most importantly of all managed to increasingly get out of the way of individuals looking to transact with one another.

Gratefully the world is an incredibly multi cultural place and with a little effort we can invest globally, we can domicile globally and in many instances live in places which please us and these various choices need not be the same. When it comes to investing capital the trends in motion are hard to ignore and this is but one reason that we’re focused on emerging markets and Asia in particular. Given the balance of world population together with the growth and increasing dominance of the emerging markets it is I believe pure folly to ignore.

“History is filled with the sound of silken slippers going downstairs and wooden shoes coming up.” – Voltaire