“But The Elites Will Just Ban Bitcoin!”

I was thinking about this as I’ve been reading….and re-reading the absolutely brilliant book “Sapiens: A Brief History of Humankind” by Yuval Noah Harari, who is one of my new favourite thinkers.

In particular, there is a chapter which takes a sword to the notion that empires always crush rebellions with an iron fist:

Throughout history empires have crushed rebellions with an iron fist, and when its day came, a sinking empire used all its might to save itself, usually collapsing into a bloodbath. Its final demise generally led to anarchy  and wars of succession. Since 1945 most empires have opted for a peaceful early retirement. Their process of collapse became relatively swift, calm and orderly. In 1945 Britain ruled a quarter of the globe. Thirty years later it ruled just a few small islands.

In the intervening decades it retreated from most of its colonies in a peaceful and orderly manner. Though in some places such as Malaya and Kenya the British tried to hang on by force of arms, in most places they accepted the end of the empire with a sigh rather than with a temper tantrum.

He goes on to discuss the French empire, who were more stubborn (no surprise there)… but in terms of historical context pretty orderly:

Its collapse involved bloody rearguard actions in Vietnam and Algeria that cost hundreds of thousands of lives. Yet the French too, retreated from the rest of their dominions quickly and peacefully, leaving behind orderly states rather than chaotic free-for-all.

More recently, of course, we had the collapse of Stalin’s version of heaven, and as Harari explains, pretty damn peaceful, all things considered:

The Soviet collapse in 1989 was even more peaceful, despite the eruption of ethnic conflict in the Balkans, the Caucasus and Central Asia. Never before has such a nightly empire disappeared so swiftly and so quietly. The Soviet Empire of 1989 had suffered no military defeat except in Afghanistan, no external invasions, no rebellions, nor even large-scale Martin Luther King-style campaigns of civil disobedience. The Soviets still had millions of soldiers, tens of thousands of tanks and aeroplanes, and enough nuclear weapons to wipe out the whole of humankind several times over. The Red Army and the other Warsaw Pact armies remained loyal. Had the last Soviet ruler Mikhail Gorbachev, given the order, the Red Army would have opened fire on then subjugated masses.

Yet the Soviet elite, and the Communist regimes through most of Eastern Europe (Romania and Serbia were the exceptions), chose not to use even a tiny fraction of this military power. When its members realised that Communism was bankrupt, they renounced force, admitted failure, packed their suitcases and went home.

Three empires vaporised, and the elites basically walked away.

Do we have an empire today?

Sure, we could say this is the US, but actually if we look at the way the world operates, this particular empire is more closely tied to the global economy than any previous one. That global economy is largely influenced by central-bank-driven credit creation and fiat currency, which is incidentally how we have such an enormous sovereign bond bubble.

Now, we can debate where we’re at in the cycle of this particular empire, but we do know we’re not at the beginning. The bigger question is: How exactly does it end, and what replaces the existing clearly broken monetary system.

Which brings me to Bitcoin and an oft stated contention.

Let’s tackle this one head on because there’s been ample reason and opportunity for governments to do just that.

Governments can indeed effect a ban but they clearly cannot affect that ban in practice where it matters.

And this is the reflexive beauty here. With each crisis of confidence, Bitcoin acquires more users.

With each crisis of confidence, Bitcoin gets more popular.Click To Tweet

But this doesn’t affect us right? We’re living in the civilised, developed world.

Venezuelans? Aren’t they like Argentinians on steroids? Crazier than dogs in a cat factory.

Pffft! Well, this is Africa. What do you expect?

All of these countries are really piddly little places sporting Banana republic governments and finances.

If we are to listen to Jamie Dimwit we’re led to believe that Bitcoin is only for banana republics and criminals. It couldn’t possibly happen to “our” countries.

And then this week, something spectacular happened.

Saudi Arabia proved that Bitcoin is not just for criminals and poor people trying to escape currency debasement. It’s also for the Uber wealthy, who thought they were part of the system and then found that…ah….NO, they’re not (surprise!).

Prince Alwaleed of Saudi Arabia, in a recent statement on Reuters called Bitcoin, Enron in the making.

This thing does not make sense. It’s unregulated. It’s not under the control of the U.S. Federal Reserve or any other central bank.

Pride comes before a…. 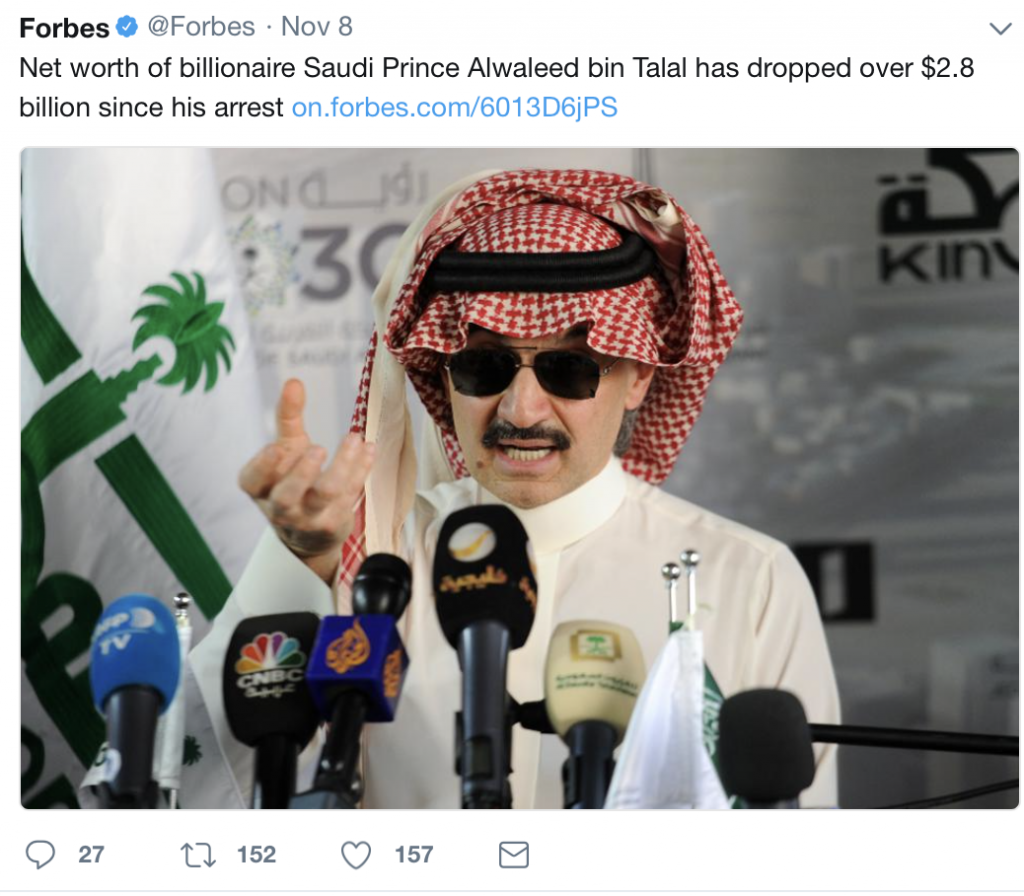 With all his accounts now frozen, I suspect that like Venezuelans… and Zimbabweans… and Argentineans… and Cypriots, Prince “Bitcoin is Enron” Alwaleed may be waking up to the utility that bitcoin provides. Clearly he never thought that utility would be applied to him.

I’m sure that all of the governments of these countries would dearly love for Bitcoin NOT to be around, except perhaps for Japan, who would gladly see their currency debased and who have legalised and accepted Bitcoin.

The Problem for Government is Twofold

First: A country such as Zimbabwe has capital controls.

This doesn’t and won’t stop folks from finding ways of getting their money out of the country. Necessity is the mother of invention. So yes, it can be banned but it can’t be enforced. The decentralised nature of bitcoin means that there is no Bitcoin HQ guarded by dobermans, electric fences, and Vin Diesel.

Second: And I’ve pointed this out to those saying governments will ban it. Their response, which isn’t stupid, is that they can shut down the miners. Like China just tried. Andreas Antonopoulos tackles this adequately in this clip.

Everything is becoming decentralised. We need only look at the president of the United States, the first head of state to run government policy via Twitter. 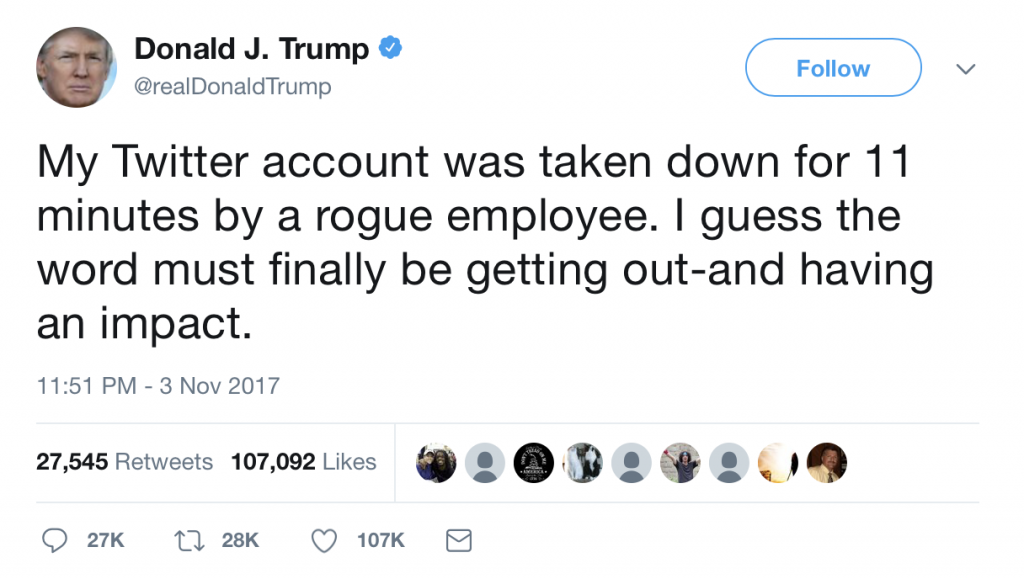 Twitter, unlike Bitcoin, does have an HQ, and if the stern faced men in pointy shoes wanted to, they can indeed shut it down. But clearly the power of an individual today has never actually been greater. This at a time when the nation state is in its death throes.

There are multiple forces driving Bitcoin right now, but lurking over the horizon is one which may well change the entire financial and economic landscape.

Given where I started this missive and looking at how a number of previous empires went relatively quietly into the night, is it too much to consider that in the next major crisis something similar may just take place?

I’ll leave you with a photo from the future. This is a guy waiting for Bitcoin to crash so he can buy some. 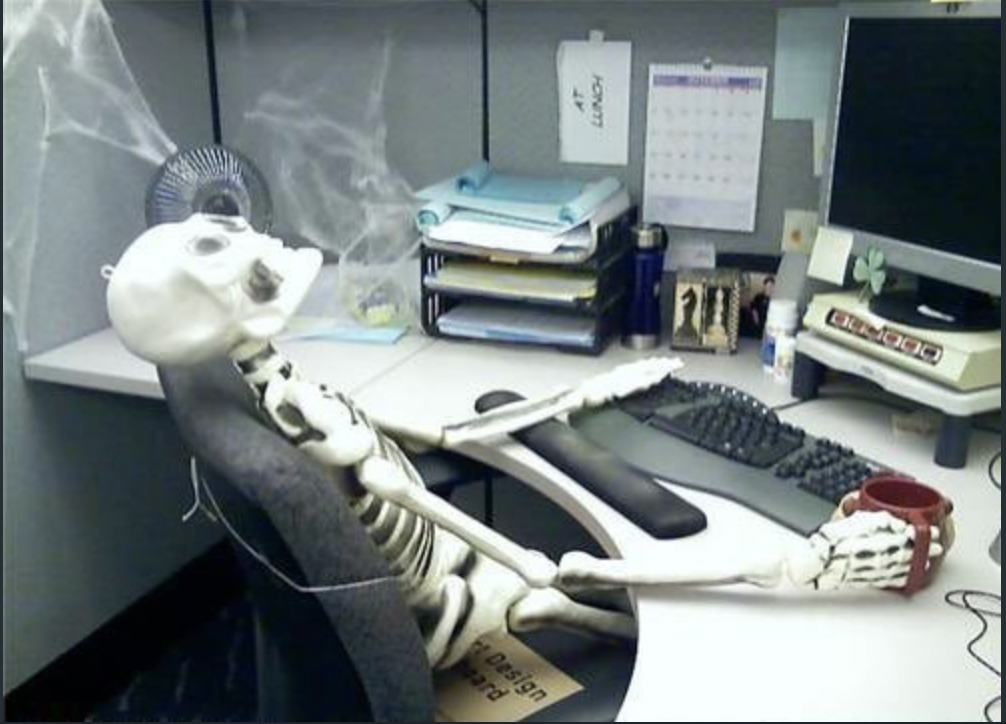 “Bitcoin is not “unregulated”. It is regulated by algorithm instead of being regulated by government bureaucracies. Un-corrupted.” — Andreas Antonopoulos.

P.S. We’ll be diving into some cool themes next week. Make sure you’re signed up for the intel.

Chris has founded and built several multi-million dollar businesses in the investment arena including overseeing the deployment of over $30m into Venture Capital opportunities and advising family offices internationally. Prior to this, Chris built a career at Invesco Asset Management, Lehman Brothers, JPMChase, & Robert Flemings.
MORE ARTICLES »
PrevPreviousInsider Weekly: An Economic Recovery Nobody Notices
NextThe “Other” Side of Asymmetry You Never Hear AboutNext