On Monday, I shared with you a conversation I had with an entrepreneur Mahdi Kazemzadeh, who’s built a business in Iran.

Here’s the astonishing thing: despite being Iranian Mahdi isn’t a terrorist. No, really!

The mere mention of Iran gets the dog-pack enzymes flowing with an easily influenced Western media-fed crowd. Pack mentality surfaces, except that those who are exhibiting it don’t call it that. No, instead they call it patriotism (discussed here), which miraculously is seen as a good, honourable, virtuous quality rather than a mental disorder.

I’ve spent a lot of time discussing the qualitative aspects affecting the global macro landscape and I receive hundreds of emails each month thanking me for sharing them. I’m deeply humbled and in fact 99.9% of readers are kind, curious, engaging, and where they disagree they do so in an intelligent and intellectually stimulating way. I genuinely love it, even if I can’t respond to all.

I like to think of Capitalist Exploits as a home for independent, objective thought. The ability to step back, observe, question where the consensus may be wrong, look to economic history for guidance, and to then objectively invest according to probabilities is at the very centre of how I feed my family and what this little corner of cyberspace is all about.

We’re here to make money, not to be popular.

As such, it’s amusing when occasionally a moron pops his wee little head up.

Fortunately, morons are desperately easy to spot. They stick out like a giant zit on a prom queen. Logic has left the building, wild accusations are used, and the pack instinct is alive and kicking. They operate purely from an emotional level, not unlike a 4-year old who’s been told Santa isn’t coming this year.

After publishing the conversation on Monday discussing Iran with Mahdi I received the usual thank yous and then this doozy:

you better quit talking ignorant bullshit about the U.S. and Trump, two subjects you know absolutely nothing about. I know you’re probably upset with yourself since you turned out to be a shit money manager and are having a very tough time dealing with redemptions but why don’t you concentrate on educating yourself and start practicing some class.”

The reason I share this with you is to demonstrate something that we’re all going to have to get very used to.

The seasons have changed. This, folks, is the pack animal zeitgeist that I’ve written about in “What the Incoming “Strong Men” Mean for the Global Economy” and elsewhere in these pages.

Humans have an insuperable tendency to form packs and proceed to bark at other packs. When a neighbour’s dog walks past my property, my dog rushes to bark at it. Every time! The neighbour’s dog isn’t a threat, it’s just what dogs do.

When a Japanese military recon plane enters Chinese airspace, fighter jets scramble furiously to bark at it. They know it’s not going to bomb China. It’s what pack animals do.

I’ve little doubt that the clown who emailed me (the one with the intellectual capacity of ringworm) gathers his knowledge of Iran from the @realDonaldTrump Twitter feed. A pack animal. Grrr! Woof! Bow-wow!

Paradoxically, when I was writing about why “the ginger ninja” was going to win the presidency (for example, this one) I received a good dozen emails which could be summarised as, “Whoo yeah! Go Trump, stick it to em!”.

I get it. It was the point I was making : the rising anti-establishment zeitgeist. The thing is – and I made this clear but it still falls on deaf ears: I’m interested in outcomes. It doesn’t matter one iota what I might wish to happen. If I was to trade based on what I wish would happen I’d not be able to afford this fancy machine I’m writing to you on.

No. The only thing that matters is outcomes and attempting to protect yourself and profit accordingly. Some seem to have unfortunately mistaken my identifying a trend for my supporting of a trend.

The response that I get when I say this is, “Oh, so you support Hillary then?”. Well, no.

Actually, I was tickled pink that the reptile was kicked to the curb but that doesn’t mean you don’t question what’s taking place, and it certainly doesn’t mean that you need to support the opposition either. It’s useful to remember that your vote is statistically meaningless, anyway.

I wrote an entire article about why voting is a terrific waste of your time years ago:

“The reason I don’t vote, apart from the mathematical certainty that my vote is meaningless and the near mathematical certainty that I will be contributing towards propelling a parasitic self serving, egotistical, yet entirely ignorant, podium doughnut towards stardom is that I don’t care for any political party either. Not the Reds, Whites, Pinks or Browns, the Tea party, Libertarian party, or any other party.

They all end up the same way, with some folks moving to expand their sphere of influence to the detriment of others who disagree with them. Voting is meaningless in its present form. “The people” are presented with a select group of egomaniacs with whom they have no connection, and who have proved repeatedly that they will never “represent” said “people” anyway. What a charade. I would go so far as saying its unethical to participate in such a fraud.”

Despite what you’re told by the media and any given podium doughnut, George Carlin was right: 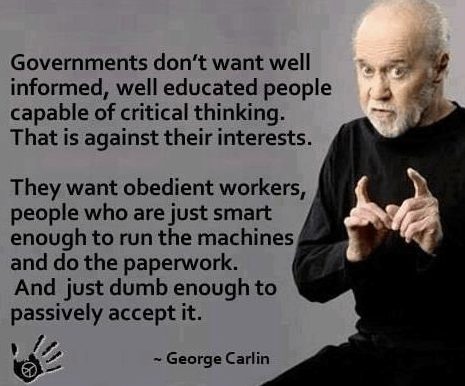 Simply investigating multiple angles is a mental challenge few are prepared to engage in, especially where it conflicts with their chosen “guru’s” ideology. Far easier to shut your mind off and follow. Just follow. Read history and tell me it isn’t so.

The psychology of a gas station lout says that if you “diss” my guy, then I’ll beat your head in with a brick. It matters not what “your guy” has said or done. The reason this matters to us as investors is because the pack actually dominates humanity.

Patriotism is simply the loyalty of dogs in a pack.

Consider this: the German soldiers who murdered millions in World War II were patriots as were the Japanese pilots bombing Pearl Harbour. In fact, we can objectively say that the the thugs who drove a truck into a crowd in Nice were patriots.

Do we admire them for patriotism? No, they’re not “our” guy.

Do their own admire them for their allegiance to the pack? Sadly, yes.

Patriotism, like love, is blind because it’s driven not by logic but by emotion. It’s irrational thought at it’s finest.

Which brings me to how patriotism, nationalism, and meatheads all come together in our world of global macro finance.

I just hopped of the phone with a friend, the gracious, humble, and razor sharp Grant Williams. We were discussing this very theme. Grant, of course, wrote about this in late 2015. War is the likely outcome. Back then few thought it possible. Increasingly, it’s not only possible but highly probable. I fear Grant is probably right.

You see countries behave as idiotically as pack animals. Politics itself rewards unprincipled behaviour. The aggressive, arrogant, and self serving are drawn to the power it represents like moths to a flame. In order to achieve the top spots they fight, cheat, steal, and lie to get there. How is this different to dogs fighting for alpha status in a pack?

Once in power, these pathological ego-maniacs (that’s how you become an alpha dog) send entire countries to war with little crackpot third world nations that the electorate has never heard of, can’t pronounce, and can’t find on a map. Given the “right” information (remember Saddam’s WMD) the crowd bay for blood. Grrr! Woof! Bow-wow!

Read that email response to my podcast on Iran again and tell me this imbecile wouldn’t be one of those pack animals baying for blood in any altercation his “guru” leader tells him is just.

Humans have incredible powers of compassion, kindness, creativity, and loyalty. They also have another side, and right now from sea to shining sea lines are being drawn and the “other side” is rearing its ugly head.

Let me ask you a question, and this is a question irrespective of your nationality, religious, or political persuasion.

Tell me, have you experienced in the last few months heated debates or even outright arguments about political outcomes and those elected or those up for election?

If so, is this unusual to you? Are you finding that siding with one political party over another is today causing problems it wouldn’t have caused in the past?

Do you sense the shift on the ground wherever you are?

Can you feel the lines being drawn in the sand?

I’d love to have your thoughts and feedback in the comments section.

From where I sit I believe we’ve solidly entered an environment where pack animal behaviour is going to rule the day. You don’t need to be a genius to figure out that the probabilities of barking dogs getting into a scrap have been magnified.

“Humans are the only animals who will follow unstable pack leaders.” — Cesar Milan (The dog whisperer)

Chris has founded and built several multi-million dollar businesses in the investment arena including overseeing the deployment of over $30m into Venture Capital opportunities and advising family offices internationally. Prior to this, Chris built a career at Invesco Asset Management, Lehman Brothers, JPMChase, & Robert Flemings.
MORE ARTICLES »
PrevPreviousWorld Out Of Whack: Trump Wall – How Exactly?
NextKiyan Zandiyeh Of Sturgeon CapitalNext

[…] I’d love to have your thoughts and feedback in the comments section. […]

[…] I’d love to have your thoughts and feedback in the comments section. […]