Round 2 for the Japanese Yen

Today’s article is compliments of our friend Mark Schumacher at ThinkGrowth. Mark has been a reader and subsequently become a regular bouncing board for us with respect to publicly traded equities, market sentiment and the like. I always value his thoughts and it is a rare occasion that we disagree. Enjoy!

As our portfolio clients are well aware, we have been long the US dollar vs. the Japanese yen (USD/JPY) via a sizable position in YCS – purchased in the mid $40s – for almost two years beginning around the time Shinzo Abe was elected Prime Minister after running on his three arrows platform:

He promised large doses of each to invigorate the Japanese economy and I took him at his word knowing it meant a much weaker yen.

Arrow #3 WILL work but it is politically very difficult to implement as it requires near term pain during the adjustment phase to produce the positive long-term benefits of improved productivity and more efficient allocation of resources; labor and capital. Progress on arrow #3 has been dismal, and to my knowledge nothing significant is in the pipeline. I would not hold my breath on this one.

He has delivered on the first two arrows by inflating the money supply, lowering interest rates and expanding government budget deficits. The longer arrows #1 and #2 are implemented the weaker the yen and later JGBs (Japanese government bonds) will ultimately become. The hope is that the weaker yen will stimulate exports and somehow provide a net boost to the country even though Japan is a large importer especially of energy, commodities and labor-intensive manufactured components.

The theories and policies underlying arrows #1 and #2 are founded on fairy dust. It is an academic pipe dream to believe currency debasement and government debt are shortcuts to prosperity. Yet the dream lives on… not just in Japan either.

Post Abe’s election the USD/JPY exchange rate rapidly appreciated from the low 80s to the high 90s and we benefited nicely with YCS appreciating about $20 into the mid $60s. Since then the exchange rate has been in a narrow range with the yen losing some value and YCS being flat through the first eight months of this year.

However, post this consolidation period, it looks like a second round of yen weakness is now occurring and there appears to be an identifiable catalyst. Notice how YCS (a long USD short JPY fund) is moving sharply higher again in the two year chart below. 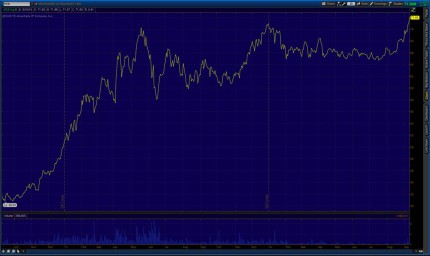 The catalyst for the next wave of yen weakness is the most recent release of Japanese economic data which was worse than expected. In Q2 the Japanese economy as measured by GDP shrank 7.1% due to a fall in both consumer spending and capital investments.

After 18 months of Abe’s massive monetary and fiscal stimulus the economy is not gaining meaningful traction to say the very least. I see this as another demonstration of how these policies cannot expand the size of the economic pie because they do not create wealth or economic prosperity, in fact, they destroy it by unnaturally skewing incentives and therefore behavior.

In a world run by rational minds, the weak Q2 data along with a string of other weak Japanese economic data would be an impetus to ditch arrows #1 and #2 and focus on #3 in which case there would be no compelling reason for us to be short the yen.

Rather than question the cause-and-effect assumptions underlying their monetary and fiscal policies in the face of a failure of results, policy makers almost always conclude that the problem was either the size or timing of their programs. This may be counter intuitive to your logical mind, but the longer Abe’s policies fail to deliver the hoped-for economic results, the more intensely they will be implemented… bad for Japan, good for our investment in YCS.

Expect more yen weakness over the coming year as the exchange rate heads back towards where it was pre-2008’s financial crisis. 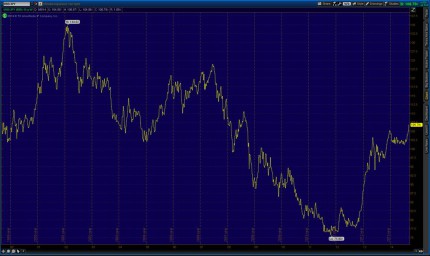 As you can see, Mark is a sharp thinker. We have previously published some of his musings on portfolio diversification, buying out of favor stocks and market volatility, and I encourage you to read them.

“Now, there is something called “Abenomics.” I didn’t coin the word. Markets did. It is the name given to my three-arrowed economic booster plan. Japan has been battling deflation for more than a decade. My plan, or “Abenomics,” is to put an end to that, first and foremost.” – Shinzo Abe