The End of The World… So, Why Are We Buying NOW in Mongolia?

Waking on the morning of the 22nd of December I was startled, shocked, and horrified to find the world looking remarkably similar to the one I left the evening before. Here I was expecting a whole New World, a better world, a world without shopping malls, noisy neighbours, TV commercials,  rising insurance premiums and, and, and…

We had all been promised mayhem and destruction while we slept. I’m a good sleeper, but figured that the end of the world in all its cataclysmic destruction would at the least wake me, apparently not.

Maybe it’s just me, but so far this New World looks, smells and feels terribly similar to the old one. My wife says I’m not very perceptive sometimes. Yeah, maybe that’s it.

On a bit of a side note, there is one guy that I bet does feel as if the world has ended. Michael Johnson, CEO of Herbalife (HLF:NYSE) has seen his world turned upside down this holiday season. If you don’t know what I’m talking about just Google “Herbalife” and click the news link. Note: I just bought some HLF. Can you say “short squeeze” anyone?

I reckon the Mayans should have said “The world will end on the 21st December 2012, but the next one will look remarkably similar to the one preceding it…don’t be fooled, it’s really very different.” Of course we now know that they really didn’t say the world would end, but merely their calendar would reset. Of course that doesn’t sell as well as, “RUN, we’re all going to DIE!” 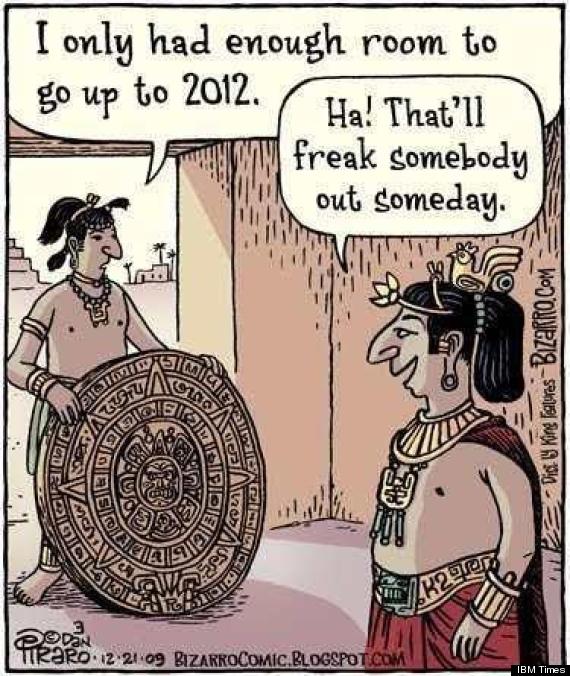 So, what has this New World got in store for us? Well for one it grudgingly (albeit thankfully as you’ll soon see) took with it all of the problems of the old world. My guess is that it remains much as it always has.

Sex, drugs, rock & roll, religion and doom and gloom (not all mutually exclusive, mind you). You want to make a lot of money? Look into one of those, they are all high-growth industries. Doom and gloom sells particularly well these days. Trust us, we have some friends making a VERY good living from it.

It’s amusing how gullible the sheeple are. They’ll keep coming back to this sort of nonsense much in the same way they will Hope for a better government while continuing to elect the same sociopathic miscreants into office.

This New World, the one we all are experiencing today, the one remarkably like the old one, provides us with a clear path to prosperity if we put aside all the distractions. That’s really all they are anyway…distractions.

I discussed this path in detail in Davos-Profiting from the Asinine. One thing that I am so very grateful for about this new world is that I don’t have to re-adjust my portfolio. Whew, I can go to the beach this weekend as planned!

What has this got to do with Mongolia Chris?

Lots really. Contrary to popular belief, the world has not ended in Mongolia either. Yet, many are acting as if it has. To my way of thinking Mongolia is simply offering us another crack at filling our Boxing Day trolleys. I believe the opportunities the country is presenting now could provide life-changing returns to investors over the coming decade.

As discussed in my last post Yak & Yen, Yin & Yang Mongolian assets (equities, currency and real estate) have been smashed by the political upheaval and overall volatility in the country.

By the way, this is common and to be expected in Frontier Markets. Those investors who accept, prepare and act, knowing that this is the status quo in these markets will make out handsomely.

Our friend Kuppy (Harris Kupperman) just bought a slice of prime retail space at $2,500/m which was not so long ago priced at $4,500/m. Harris, like Mark and I puts his money where his mouth is. But, he accepts as we do that we may be early, or just plain wrong. Right now pretty much everyone we speak to believes that Mongolian assets are worth buying NOW. We don’t think we’re wrong.

The Tavan Tolgoi mine is considered by geologists to be the world’s largest untapped coal deposit, while Oyu Tolgoi is the worlds largest untapped copper/gold deposit. As enormous as this is in itself, what investors need to understand is the context of these projects and many others like them.

Folks, Mongolia has an $8 Billion economy. I’ve heard comparisons being made with Australia, which is ludicrous. Firstly, Mongolia sits on the border of Russia and China, two hungry consumers of resources. It’s true that Australia also ships vast amounts of its commodities to these two countries, but the expense and logistics of getting it there is complex and expensive when compared to Mongolia.

Secondly, Mongolia’s economy is less than 1% of Australia’s, while sporting a population of just under 3 Million people or about 10% of Australia’s population. Mongolia is starting at such a low base, on so many levels. It really has much, much more potential than Australia does at this point.

Mongolia’s demographics, which is something plaguing much of the developed world, are very favourable. The average age is just 26. These folks are not even thinking about, nor are they currently burdened with how to deal with an ageing population, social safety nets and the like.

OT begins production this year. It will bring significant cash flows into the country. Combine that with the government’s recently concluded and oversubscribed bond sale and you are about to see a flood of money hit the economy. This at a time when the overall market is down 30%+, with many assets down even more. This money will have an inflationary impact on asset values.

Personally, I think this is the most compelling opportunity to get long Mongolia since the crisis of ’08. In fact we just alerted our CPAN members to an upcoming IPO on the Mongolian Stock Exchange that we feel has immense promise. (If you’re interested in CPAN you have to contact us directly)

For those of you who want an insider’s view of how to play Mongolia right now, you need our newly released Mongolia: Boots on the Ground investor video series. You’ll hear from guys like Kuppy, Lee Cashell, Chris DeGruben, Oscar Mendoza and Eric Zurrin. Go check it out.

For some the old world may still be around for a while. However, we prefer to seek out the New World. That’s why we love Frontier Markets – places like Mongolia, Cambodia, Myanmar, Laos, Sri Lanka, Nepal – this is where the wealth will be created going forward. If you can cast aside the doom and gloom, wander away from the herd and live in the here and now, you’ll find that there are amazing opportunities to be had.

”First of all I trust my own instinct, experience that I gained over years and feeling when the moment is right for buying shares. That is what one calls intuition.” – Alisher Usmanov (Net Worth $18.1 Billion)

Could not agree more. I have been adding to MSE positions on this pullback. I am convinced the political rhetoric will die down as there is to much money at risk. I have seen the same thing happen in other frontier markets. You just have to have the fortitude to ride through the squalls and stick to the original thesis. Cheers.

Indeed John. This is somewhat standard operating procedure for a frontier market.
Just yesterday we had the president coming out with bold statements to the effect that Mongolia should respect its agreement with OT and that a “better environment for foreign investments” should be created by the government.
http://news.xinhuanet.com/english/business/2012-12/26/c_132064841.htm

Ha ha. With my typical awesome timing, I just bought a bunch of Herbalife a month ago. I’m down just shy of 39% on that position right now. Ugh.

Hi Sam. To be sure I’m not suggesting investing in HLF. This is purely a trade for me. I went long at $25 and will just play the bounce. Better luck next time:-)