While on a weekend hike with my family a few weeks ago I bumped into a very experienced alpine climber and we started chatting. This guy had climbed some of the most treacherous alpine mountains that the planet can chuck at you. 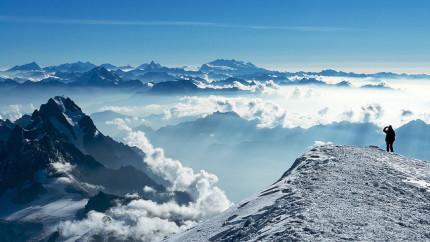 I’ve never had the inclination to climb like this guy climbs. Firstly, I’m not great with heights and while I enjoy being outdoors, I like doing so without being convinced that I’m going to die. It spoils it for me.

I was curious to know what the real risks of falling when climbing treacherous terrain were like statistically. He then told me an interesting fact: most climbing accidents involving falls happen NOT at the riskiest part of a climb, but rather in sections of terrain which you’d not expect to see the highest casualties.

What happens is that climbers come out of very risky terrain and subsequently think they’re out of the “high risk zone” dropping their concentration, and not realising they are still in a risky environment. This lack of attention kills more climbers than anything else.

You see the same sort of thing on long stretches of straight roads. Drivers simply get lazy and stop paying attention. Next thing they know they’re upside down and the airbags have been deployed (or worse, they were driving a Lada and there are no airbags).

One of the lessons I learned when trading for a living was that when I was “cruising” I would inevitably make stupid decisions. I would be the equivalent of the climber who has just finished a really treacherous section of a climb and thinking he can “relax”. I’d do something stupid, forgetting that I was still “on the mountain”.

This complacency is a killer and right now we have complacency in a number of markets, not the least of which are the debt markets, both sovereign and corporate. Our Global Debt Report highlighted the truly astonishing state of our global debt markets. The data shocked even me when I first reviewed it.

Today the situation in the corporate bond market is even worse. In a minute we’ll take a look at it but before we do, what is important to know is why corporate bonds are so overvalued. To answer this question we need only look at government bond markets which have been hijacked by central bankers intent on injecting ever more liquidity into the world economy.

The above graph is really indicative of what has driven capital into the private corporate bond market, creating in the wake of a sovereign debt bubble yet another bubble. Most notable is the junk bond market.

Since 2008, high yield debt has gone from $300 billion to $900 billion. This is but one side effect of QE which has forced sovereign bond yields into negative real territory and sent yield hungry investors into the high yield market. 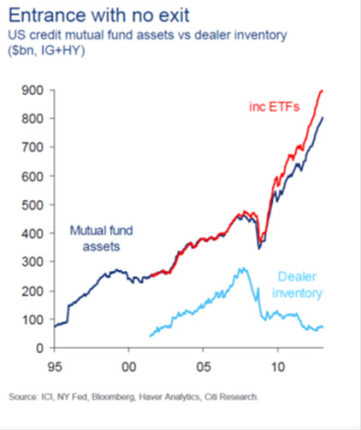 While investors, mutual funds in particular, have been scrambling into junk bonds like fat kids after that last cupcake, the fundamentals in this market have been collapsing. The ratio of dealer inventory to fund/ETF holding has collapsed as shown above. Remember that banks act as the intermediaries between buyers and sellers providing liquidity to the market, and their holdings have gone from $286 billion to $96 billion – a mere 9% of inventory.

Dealer inventory to US corporates has careened from 8% down to just 1%. In case readers aren’t 100% clear what this means let me explain with one word: LIQUIDITY. Banks and dealers provide liquidity in any market and this one is no different. That liquidity cushion has collapsed by over 88%.

Liquidity is so very important, especially at market extremes. Elaborating on the concept of liquidity, the ever brilliant Howard Marks of Oaktree Capital recently put it this way:

It’s often a mistake to say a particular asset is either liquid or illiquid. Usually an asset isn’t “liquid” or “illiquid” by its nature. Liquidity is ephemeral: it can come and go.

Bonds, unlike equities are non-linear. A bond market can, will and does go “no bid”. Let’s take a look at my old employer: 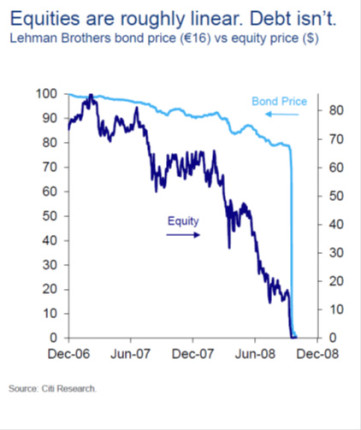 Knowing that an event has a high probability of arriving and failing to position accordingly is like getting Scarlett Johansson into the sack and promptly falling asleep. A terrible shame! There are a number of ways to deal with this. I’ll list a few that pop into my head:

Our very own Brad trades the asymmetry discussed here using optionality which is our favoured method, but who am I to tell you what to do with Scarlett in bed?

“Liquidity can be transient and paradoxical. It’s plentiful when you don’t care about it and scarce when you need it most. Given the way it waxes and wanes, it’s dangerous to assume the liquidity that’s available in good times will be there when the tide goes out.” – Howard Marks