This is the Land of Milk and Honey

A couple of weeks ago I said Jim Rogers has been wrong. I promised a follow up to that article and here it is. Truthfully, I was being a bit hard on him. Jim is an intelligent investor who has long railed against the revolving door between our political and financial systems which should be clear to all but the dimmest amongst us.

It is ironically this hideous system which Jim despises almost as much as we do, that is the cause as to why Jim got it wrong. Not wrong on being bullish agriculture but rather wrong in expecting bankers to be handed their just dues. I explained briefly why this is the case a few weeks ago.

Perhaps, like us, he wishes for a world where justice is served via a free market capitalist system. Where failed businesses, built on the back of taking obscene risks with other peoples money by ever increasingly arrogant CEOs (yes, you Blankfein and Dimon, you obnoxious goats) enjoy the brutal but honest reality of a market based system instead of bailout capital, and where hard working entrepreneurs are rewarded, not by crony capitalism but by their value they bring to society.

I know, I know… Unicorns, bunnies and rainbows, right. It’s just not the world we live in.

Successful investing involves determining risk and reward and further identifying opportunities skewed in the investors favour. Let me be clear – I don’t want to invest in a “fair” market. I do wish for a world that involves a “free” market. Fair markets don’t and will never exist. Not because bureaucrats will screw things up which they most certainly will, but because human nature ensures that the perception of risk and reward swings wildly. This will never change.

Agriculture provides a favourable risk reward setup for investors for all the reasons that Jim has many times so eloquently pointed out. While agriculture has been doing well, the guys providing services to this sector have been making a killing. As is often the case those selling the picks and shovels make more than the gold miners themselves. To highlight my point I’ll share with you correspondence I had with Brad Farquhar CFO of Input Capital who I mentioned many times previously.

“On a note related to your note which mentioned us, over the last 5 years, during some very good times in Saskatchewan agriculture, we got our first Porsche dealership, Mercedes expanded, and the local Audi dealership split off from its shared space with VW to have its own stand-alone dealership.  The number of luxury cars is accelerating, and the guy who own the pizza place near my house has two Lamborghini’s.

Every farm equipment dealership has built massive new facilities, and the owner of Brandt Tractor (the largest privately owned John Deere heavy equipment dealership in the world), which is based here, built a $25 million house north of town.  He’s still not done building the golf course (Google Maps)

So there’s an extent to which Jim Rogers was right. The town is booming, and we still have no investment bankers here!”

One of the reasons that Jim was wrong about bankers earning less than farmers is due to the fact our current monetary system is built on a foundation of crony capitalism. This system has been pushing the envelope on all fronts and this cannot last forever. In that respect, I suspect Jim may yet be proven correct.

All good things come to an end… And so do all bad things. A reset is coming. In fact, it’s already begun.

Case in point: the bedfellow of absurdly low interest rates is historically high levels of government incompetence, corruption and interference. The de-pegging of the Swiss franc from the euro is one cog in the machine which has been removed increasing the likelihood that this unstable and unsustainable house of cards comes toppling down.

The cards are lining up to fall as expected. In Europe we have a rapidly deteriorating situation whereby those that are “in the room” are scuttling to get out. The Swiss, now the Greeks. Who’s next? The “confidence” holding this together is unwinding and with nothing but smoke and mirrors to keep it glued together we’re in for a massive USD rally. 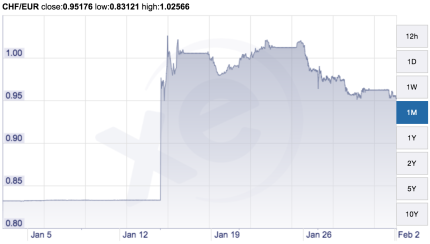 Many years ago I worked on a project for JPMorgan with a bunch of guys who called themselves the “6 sigma team”. These quants’ job was to figure out all the risk metrics for the hundreds of products, currency crosses and so forth that the bank was engaged in. The name 6 sigma stemmed from 6 standard deviations from the norm, being an extreme event. It was thought that if contingencies were in place 6 sigma event risk then the bank was pretty damn safe. How safe? Well, by definition a 6 sigma event takes place every 1.4 million years!

The CHF move we all just witnessed shattered the event risk red line odometer by clocking in at over 20+ standard deviations to the norm. FX moves of this nature are the sort of thing that takes place in illiquid currencies managed by tinpot dictatorships, where such moves are ostensibly NOT 6 sigma since one expects this of tinpot dictatorships and as such market participants trade accordingly.

The swissie, on the other hand, is not run by a tinpot dictatorship, is not illiquid, and is not prone to violent volatility. It is the 6th largest currency unit by volume and it got there by behaving itself. Very few saw this coming. It’s like finding that little Johny who’s been getting straight As, winning the debating contest, coming first in recorder, harp, and guitar classes, has been cooking meth in the garage, gang-raping the convent girls down the road after music lessons, and has buried the missing bus driver in the back garden after beheading him at a satanic ritual. Surprising!

When you get moves like this, stuff blows up. Right now risk models everywhere are blowing out. That I can guarantee you. This is akin to finding out that your 2 AM kebab from the dodgy diner is actually prime Kobe beef on a bed of organic rocket instead of roadkill or some mixture of horse, goat and whatever was at the bottom of the freezer. It’s basically never meant to happen which is why nobody believes it until it actually does. A black swan in Taleb’s world.

“Confidence” is the only remaining reason that anybody uses fiat currency, and maintaining that confidence at all costs is absolutely critical. This confidence is slipping inch by inch.

THIS could be the straw breaking the camels back!

The recent happenings in the European bond market should come as a red flag. Post the CHF decoupling the results of the Bundesbank’s EUR2B 8/46 tap are now out and it was a complete disaster. The Troika must be wringing their teeth and gnashing their hands and so they should be. The Bundesbank sucked up a whopping 53.1% of the offer setting the record for any German auction going back to the beginning of the Euro. This, folks, is NOT meant to be happening.

Brad has been building positions for the last 6 months as we’ve been explaining why we’re heading into an incredibly strong USD bull market. We went so far as to put together a complimentary detailed USD report which you can access here, explaining why this would be the case, and further detailing specific trades which stand to benefit as this plays itself out. It’s still relevant today.

Capital flows are really important and need to be understood. It’s dangerous to look at the greenback, or any currency, or asset class in a vacuum. Markets are interrelated and capital flows are global, which brings me back to agriculture.

Why agriculture? Because it’s not some piece of paper. Because there is a supply demand setup which is highly favourable and because food and water are absolutely vital. As the loss of faith in government accelerates and begins to rip through the sovereign debt markets, tangible assets in a safe jurisdiction hedge this risk.

There are few countries in the world that provide both political stability, and agricultural opportunities as does New Zealand.

I recently listed all my own personal reasons why I believe New Zealand is an exceptional place in “12 Reasons Why Here and Not There” but certainly the fact that most every New Zealander has roots on a farm, lives on a farm, or in a farming community is one reason. If you’re going to get run over in NZ it’s far more likely to be by a farmer than a banker.

New Zealand will struggle to starve. It claims 1.3rd of world dairy exports meaning it’s basically the Saudi Arabia of dairy. Fully 37% of its land mass is devoted to agriculture and 48% contributing to total exports with 90% of farm production exported. Why so much? Because it’s empty. No really, there is nobody here. 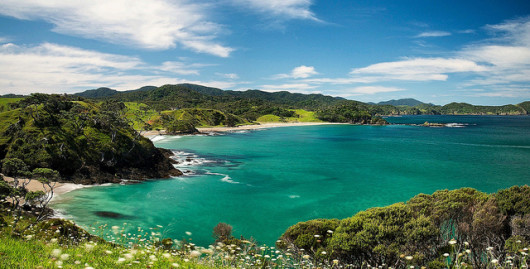 The UK, a country roughly the same size has over 64 million people. I’m still puzzled it hasn’t sunk. New Zealand, on the other hand, has just 4.5 million people.

The country has gone from being one of the most regulated countries in the OECD to one of the least regulated and as a result the economy has boomed. The current political party in power has been diminishing the states involvement in things such as housing for the poor. Housing, like every sector of the economy, is best dealt with by private enterprise, not government. Just the other day the government took yet another step towards getting out of things which they should never be involved in by selling down state housing.

Clearly we’re not the only ones who think New Zealand is an exceptional place from a risk reward perspective. Many of the wealthiest people in the world, who have the resources to go anywhere, and buy anything have been quietly establishing escape hatches here:

“I know hedge fund managers who are buying airstrips in places like New Zealand because they think they need a getaway.” – Robert Johnson, previous MD at Soros Fund Management

We believe we’re rapidly entering a bull market in safety and security, and we’re long.

With all of the growth hormones and antibiotics I doubt the milk. With bee colony collapse I doubt the honey, leaving what?