Each year we have made a habit of taking a look back at what we’ve prognosticated “may” occur during the year and holding the mirror up. Given that we’re at year end 2014, it’s that time again!

Sometimes this is a painful exercise, as it’s a clear reminder of how much we still really don’t understand. At other times we get to jump with joy a little as our thesis plays out. Regardless, each year we’re drawn to it like vegetarians to a bacon sandwich. It has this strange pull…

On the 16th of January 2014 we suggested that USD/JPY would hit 120, and we further suggested a long gold, short yen position.

Gold, while not so spectacular, was trading at 130,000 and as I write this is trading at 143,000 (note: this is different than the per ounce price). We in fact reiterated our long gold short yen call a week later. So far so good. Short yen is something of a theme on our little patch of cyberspace, as we’ve been short in the spot market from the early 70s, and while it’s been extremely profitable thus far we believe this trade has much more left in it.

On the 29th of January we made a call for a stronger US dollar, weaker EM currencies and short US stock market correction.

There are many ways to factor how this could have worked out. I’ll simply take CEW, which is the Wisdom Tree Emerging Market Currency ETF. The graph below paints the picture. 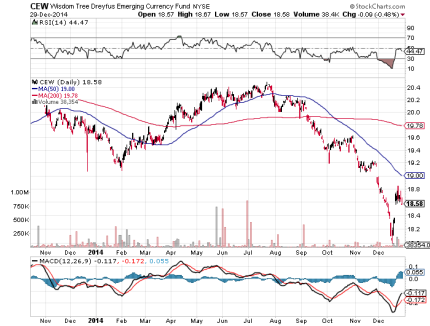 We think this trade is just getting started, and 2015 will be a banner year for those looking to capitalize on an unwinding of the USD carry trade in general. When we wrote that post the Dow was trading around 16,500. It corrected a few months later to the 15,400 level before heading much higher.

On the 30th of January in a post entitled, “Buying Bombed out Equities for Outsized Returns” we suggested buying Energold Drilling at $1.62. It’s now at 0.82c. Yikes!

Tied to commodities even the well-run companies have been hammered.

Two weeks later we stated in a post, “The Next Big Thing in Finance” that we believed crowdfunding would take off, and we therefore suggested investing  in crowdfunding infrastructure.

This has been one of the most interesting markets we’ve been involved in. We’ve made some investments into companies building the required infrastructure for crowdfunding. We continue to look at investments in this area, though all are in private equity. We believe that billion dollar enterprises will be created right here and now in the companies providing services, resources and infrastructure to the crowdfunding marketplace.

So, what has happened since we wrote that post? In 2012 crowdfunding platforms had raised $2.7 billion and successfully funded more than a million campaigns, according to a Massolution report, with an 81% increase to $5.1 billion in 2013. 2014 is expected to clock in at around $9 billion, and by 2025 the global crowdfunding market could reach between $90 billion and $96 billion — roughly 1.8 times the size of the global venture capital industry today, this all according to a 2013 study commissioned by the World Bank. We’re excited about the partnerships we have in this area and the opportunities we’re reviewing.

The jury is still out on this though you can certainly buy these positions a lot cheaper today, and as such we’ll take a brow beating on that call.

Picking a bottom in a short term cyclical market within a long term secular bull market has been incredibly tough. Gold has perplexed us many, many times. We believe that it will rally when people finally lose faith in their governments. This can be triggered at any moment, so we’re long term bullish, but 2014 has not been kind to gold or gold equities.

Barrick have been punished, and while we’re in this position through till 2016 we’re currently down. It has to be said though that we get excited when an entire sector gets hammered as much as this sector has. Investors should look at this as a good thing, we certainly do!

On the 16th of May in a Q&A with Brad we suggested the USD/JPY would go higher and Japanese equities would also move higher in US$ terms.

Then a week later we suggested that in the next few years developed market equities (US and Europe) would go up,  emerging market equities down, bond markets would go down (yields to the upside) and the USD would rise.

A few years is not 12 months, so the clock is still ticking on this one. Emerging market equities are getting smashed, emerging market bonds are having a rough time and we’re in a USD rally. We think we’re still in the early stages of this trend, but will be watching it closely nontheless. So far this call is looking good, though bond yields are not rising yet, except in emerging markets.

In a post on the 6th of June discussing an “insurance policy”, we suggested buying December 2016 $98 strike Eurodollar put options.

Those options were trading at 0.54. Today the price is 0.46 and the price of the underlying futures contract is 98.11. We’re not too concerned. This has two full years to run. We’ll likely be buying more.

I wish I could say we saw the collapse in crude oil coming but that would be rubbish. We in fact were bullish as mentioned in a post, “Is Crude Setting up for Something Big” on the 20th of June.

Whoa… did we get this one wrong! The collapse in oil has some really serious repercussions which we’re not seeing discussed openly. and therefore we will have some of our thoughts on this penned shortly.

On the 18th of July we discussed buying Veolia Environment via December 2020 warrants.

The warrants are currently trading at 0.44. When we published this they were at 0.39. We have till 2020 on these warrants, lots of time still.

On the 12th of August we said to Buy ZIV as a play on volatility. Currently this trade is around breakeven at 44.

In late August we said that the bubble was in cash not stocks, and suggested that the US market rally would continue higher.

At time of publishing the Dow was trading around the 17,000 level and today is 1,000 points higher.

On the 11th of September we once again spoke about the yen and suggested a long USD/short JPY via buying YCS.

At the time of our call YCS was trading at $72. Today it’s trading around $90. There’s more to come we think, but with YCS you need to understand that this is a leveraged ETF, and trade it accordingly.

Not too long ago, back in early October we suggested that the Singapore dollar would depreciate against the dollar.

On the 2nd of October when we published this the Singapore dollar was 1.2722, and as I write this it is trading at 1.3234. So, it’s heading in the right direction.

We suggested very strongly on the 21st of October that the Chinese remnimbi is setting up for a fall.

On the 6th of November we were buying selected junior gold miners as suggested here.

We made a call for a US dollar rally and EM currencies to suffer on the 13th of November.

This trade was made just over a month ago. Understanding why we’re in a bull market in the dollar is so important that we’ve put together a complimentary report on the topic. We sincerely believe the bull market in the USD will be front and centre stage in 2015!

If you’re a subscriber you’ll be emailed the report this week. If you’re not yet a subscriber, shame on you! Please drop your email into the little box below and the report will be emailed out to you this week. We prefer that only “awesome people” subscribe to our missives, please! We have a no D-bag policy going into 2015 🙂 [mchimp_signup group=”Twice Weekly”]

Just a few weeks ago we made another call on the yuan to depreciate.

OK, it’s too early to know the outcome here, as we’re only a few days into this idea. Let’s revisit same time next year and see whether we’re eating humble pie or caviar on our new yacht.

That my dear readers is a wrap for 2014. All in all a good year, though we have to say that we think 2015 is setting up to be one for the record books!

Wherever you are we wish you a wonderful New Year and a prosperous 2015.

“A cat’s New Year dream is mostly a bird! Don’t be like a cat; in New Year, dream something that you have never dreamed! Target for new things!” – Mehmet Murat Ildan

Great post! Thanks for sharing this: “A cat’s New Year dream is mostly a bird! Don’t be like a cat; in New Year, dream something that you have never dreamed! Target for new things!” – Mehmet Murat Ildan